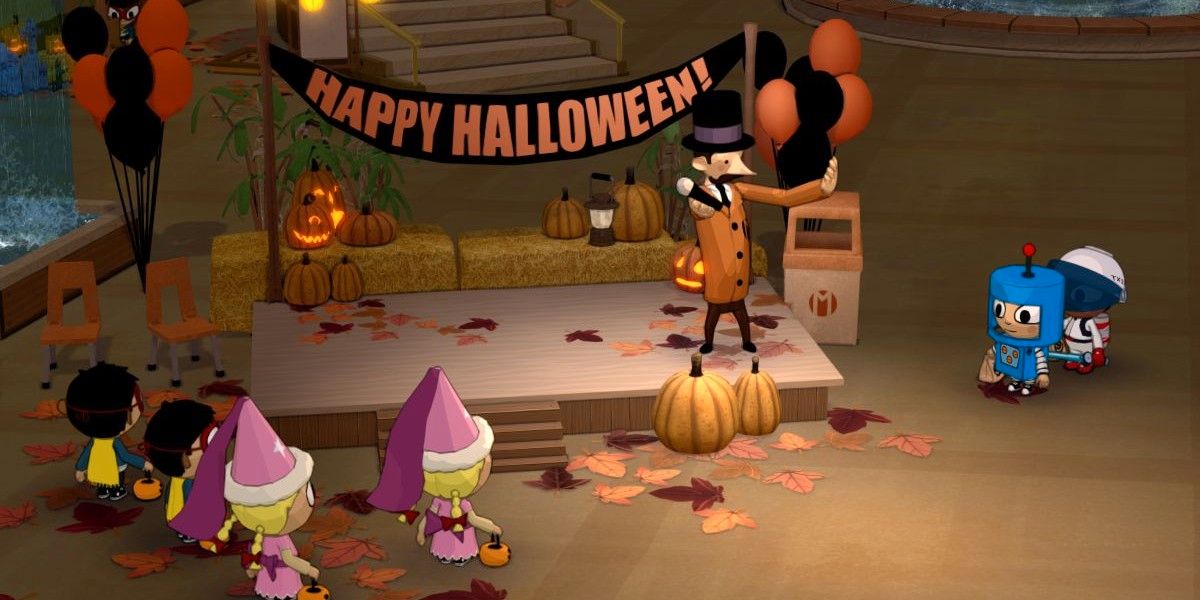 While there are plenty of spooky horror games to play during the Halloween season, not many actually take place on Halloween. Horror game favorites such as Silent Hill, Resident Evil, Until Dawn, and Fatal Frame certainly serve in the spirit of fright, but not so much in the realm of actual Halloween.

There are some games out there that do take place on Halloween though, and they range from action to puzzle and adventure.

Costume Quest is an adorable adventure RPG in which players take the role of twins, Wren and Reynold. As the twins, they can explore and complete quests through trick or treating. You can also slowly unlock costume parts to alter your appearance and slowly make an adventuring party.

The game and its sequel are available on the PC, PS3, and Xbox 360. The game is not scary at all, in fact, it can be funny at times and truly captures the child-like charm of the holiday.

Originally for the NES, but available today on Steam and the Nintendo Switch, Haunted Halloween ‘86: The Curse of Possum Hollow is a beat’ em up platformer. The story is about some kids, trick or treating, and wandering into a farmhouse that belongs to some crazy farmer.

RELATED: The Legend of Zelda: The Best Areas for Halloween Across the Series

The farmhouse becomes a seven-level dungeon of undead monsters. The game is known to be difficult but is quite nostalgic for fans of 8-bit games.

Batman: Arkham Knight is a beloved title that sits on a throne of awards. The action-adventure game was released in 2015 for the PS4, Xbox One, and PC. While the game feels long, the story within the game takes place on a single night. The night is Halloween.

The tie-in to Halloween has some neat easter egg content as well. For example, if the console’s internal clock says it’s October 31, there will be a Man-Bat appearance.

Barnyard Blast: Swine Of The Night

Released in 2008, this Nintendo DS game acts as a parody to games like old horror titles like Castlevania.

The story is about a father big, Robert, going on a quest to save his piglet that was kidnapped and taken to a spooky ancient castle on Halloween night. The game has six levels, some having funny names such as “The Volcano BBQ,” “The Swamp Full of Disgusting Creepy-Crawlies,” and “The Castle of Intolerable Pain.”

Night In The Woods

Night in the Woods is a single-player adventure game that is story-focused. It takes place over more than just a day, but is all during Autumn and does include Halloween (though within the game it is known as Harfest).

During the town’s Harfest festival, the protagonist witnesses a teenager being kidnapped. She also dresses up in a cute little outfit and does a hilarious little Harfest performance.

Released in 1995, Jack Bros. was an action game for an old console forgotten by time, the Virtual Boy. The story involves three Jack brothers, Jack Lantern, Jack Frost, and Jack Skelton who visit the human world on Halloween. The game’s story is simply for the brothers to return to the fairy world before the portal closes.

The game was actually the first of the Megami Tensei franchise to be released in North America.

The player goes through levels in haunted forests, graveyards, shipwrecks, mansions, and more. They are able to pick up weapons and fight monsters.

Alien Incident is a point-and-click adventure game that was released in 1996. On Halloween, the protagonist visits his uncle’s mansion. His uncle’s newest invention creates a wormhole that brings an alien spaceship to earth. The uncle is then kidnaped by aliens and must be saved.

The game is not scary and remains pretty light-hearted throughout the story. Like most point-and-click games, it does have plenty of puzzles.

For the PS2, Gamecube, and Game Boy Advance, Castleween is about kids Alicia and Greg trying to save their friends on Halloween night after they were turned to stone by a monster. The game can be single-player or multiplayer, and got pretty mixed to negative reviews from critics.

The game was made by French developers, Kalisto Entertainment and Wanadoo Edition. Having been released in 2003 and not having gotten much positive attention, Castleween is a game many have forgotten.

Not to be confused with Scooby-Doo and the Ghoul School, this NES game was released in 1992. The story is about a high schooler, Spike, that takes a skull he found in a cemetery to show to an anatomy teacher at school on Halloween.

However, doing so has released the undead upon the high school. The head cheerleader is kidnapped and teachers and students have turned into demons. In terms of genre, the game is action and survival horror.

NEXT: The Best Areas For Halloween In Nintendo Games