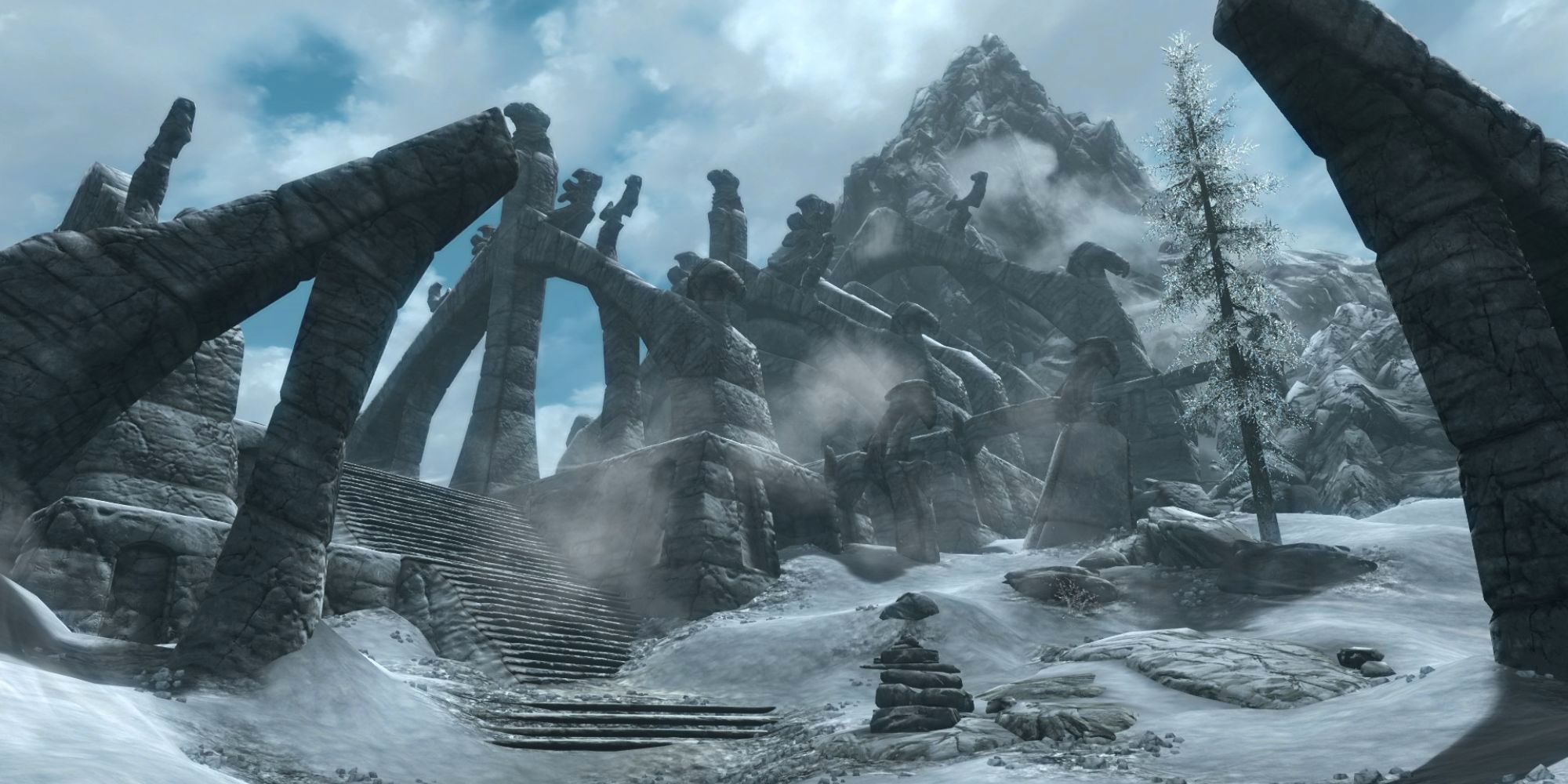 The Elder Scrolls is a series that has grown beloved by fans over the years, with Morrowind and Oblivion capturing gamers’ hearts in the earlier days of 3D gaming, and Skyrim taking the world by storm, and continuing to do so on modern platforms.

And though Skyrim has been released time and time again since its initial launch in 2011, fans all over still eagerly await The Elder Scrolls 6. That said, the series has offered so many memorable experiences, and with them, incredibly iconic locations.

You know this one. You almost wish you didn’t, but oh boy, do you know it well. Bleak Falls Barrow is a location you’ll visit very early on in The Elder Scrolls 5: Skyrim. Even in an expansive open-world game where you’re free to explore what you want, when you want, you will undoubtedly clear this one first.

The exterior is large, and though it looks similar to most Ancient Nordic ruins across the map, it still remains iconic. The stone arches, the frost-covered floor, the colossal doors. If you have played Skyrim, you’ve played it many times, so you’ll also be familiar with the interior many times over – you’re just here again for the Golden Claw and the Dragonstone.

Iconic more in name than appearance, but the appearance is definitely memorable – Sovngarde is the place Nord warriors aim to go after death, where they earn their eternal feast and battles. Not unlike Valhalla from Viking culture, Sovngarde is something you’ll hear a lot about in Skyrim.

The final quest in the main story of Skyrim will see you enter Sovngarde, and here you can gaze upon the beautiful land of the fallen. The skies are colorful, the land is lush, and the Hall of Valor is towering and glorious.

If you have played through The Elder Scrolls 4: Oblivion, you will have already spent a lot of time at Cloud Ruler Temple. As a member of the Blades, sworn the protect the Dragonborn, this location acts as your base – and the place Martin Septim will spend the game hiding away, guarded extensively.

It towers all else around it, built on a hilltop – though there isn’t much else around it, aside from the nearby city of Bruma. Makes sense being as the Blades really don’t wish to be bothered, what with protecting the future Emperor of Tamriel.

While we’re on the topic of very high-up locations full of people who don’t want to be bothered, we have to mention High Hrothgar. Home to the Greybeards, here these monks remain in seclusion as they hone their skills in the way of the voice – more than just old men shouting at each other in a castle.

After being called up to this towering structure, you’ll soon wish you hadn’t gone. Sure, you’ll learn some good words of power, but there are so many long conversations to sit through, dark and dreary hallways to navigate, and that one pesky Frost Troll on the trail up the mountain. Though you get to meet a cool dragon, so it’s worth it.

Introduced as additional content for The Elder Scrolls 4: Oblivion, The Shivering Isles is the realm of the mad god Sheogorath. This Daedric prince is known for his love of all things bizarre, and his entire island reflects that.

RELATED: Oblivion: All The Cool Gear You Can Only Get From The Shivering Isles

The island is strangely beautiful, with marsh-like landscapes, odd inhabitants, and fantasy-sized mushroom trees – it’s sure to stick with you as you go. You’ll spend plenty of time on this island, and will have encounters with Sheogorath himself, so it’s no wonder that this DLC is adored by fans.

All caves lead to Blackreach. Well, not entirely, but this vast and colossal underground structure will be a location you’ll end up in plenty of times in The Elder Scrolls 5: Skyrim. Sure, it’s got some nasty creatures and Crimson Nirnroots you’ll be scavenging for, but the aesthetic of the place is undeniable.

The most iconic is the massive glowing orb that hangs high above the central structure – which only looks even better when being circled by the local dragon who lives in the cave. Compared to a lot of fantasy RPGs, Skyrim looks somewhat bleak on the surface – grey, snow, and some rocks here and there for the most part – but Blackreach makes up for it all with the glowing flora and terrifying fauna.

Speaking of terrifying, let’s take a look at the most iconic Plane of Oblivion – The Deadlands. What’s potentially more iconic is the gates to enter this realm, as they’re dotted all over the plot of The Elder Scrolls 4: Oblivion – it’s even the logo for the game.

The lava-filled landscapes and tall, spikey towers are a sight you’ll not soon forget. And if all of that isn’t enough, how about all of the mutilated corpses and aggressive demons awaiting you all over. An iconic location to be sure, but perhaps for the wrong reasons.

Heading further back to The Elder Scrolls 3: Morrowind, this title still holds a special place in many players’ hearts. Paving the way for open-world 3D RPGs, Morrowind was an extraordinary feat for the time. As such, you can only expect one of the biggest and grandest locations from this title to remain iconic.

RELATED: The Elder Scrolls 6: Features From Morrowind Bethesda Should Bring Back

Vivec City is architecturally impressive, with structures built across the water, on the coast of Vvardenfell. With its returning appearance in The Elder Scrolls Online: Morrowind, players were overjoyed to see the city once again – and this time, with a much larger draw distance, allowing us to see it in full glory.

Iconic in sheer size, and the very seat of the Emperor, the Imperial City is adorned with the White-Gold Tower and can be seen from almost all over Cyrodiil – realistically, anyway. While you don’t get much opportunity to go in the tower itself, you’ll spend plenty of time in the districts of the city, all of which surround the structure.

Not only is it prominent in The Elder Scrolls 4: Oblivion, but the Imperial City and the White-Gold Tower are just as iconic for their very grandeur. Coupled with being centrally located across the entire of Tamriel, and you have yourself one of the most iconic locations in the entire series.

Not the capital of Skyrim, and not even the previous capital of Skyrim, but it’s the city you know and likely call home – Whiterun. After escaping Helgen and taking a small break in Riverwood, you’ll soon be heading off straight to Whiterun, home to the impressive Dragonsreach – a large Nordic hall that stands above the city, originally designed to house a captured dragon.

If not just Dragonsreach, Whiterun is also where you’ll find The Companions, Skyforge, The Bannered Mare, Breezehome, Belethor’s (somewhat infamous) Shop, and it’s the place you’ll be quicksaving every time Nazeem crosses your path – the Cloud District isn’t all that great, truth be told.

NEXT: How Long Does It Take To Beat The Elder Scrolls V: Skyrim?