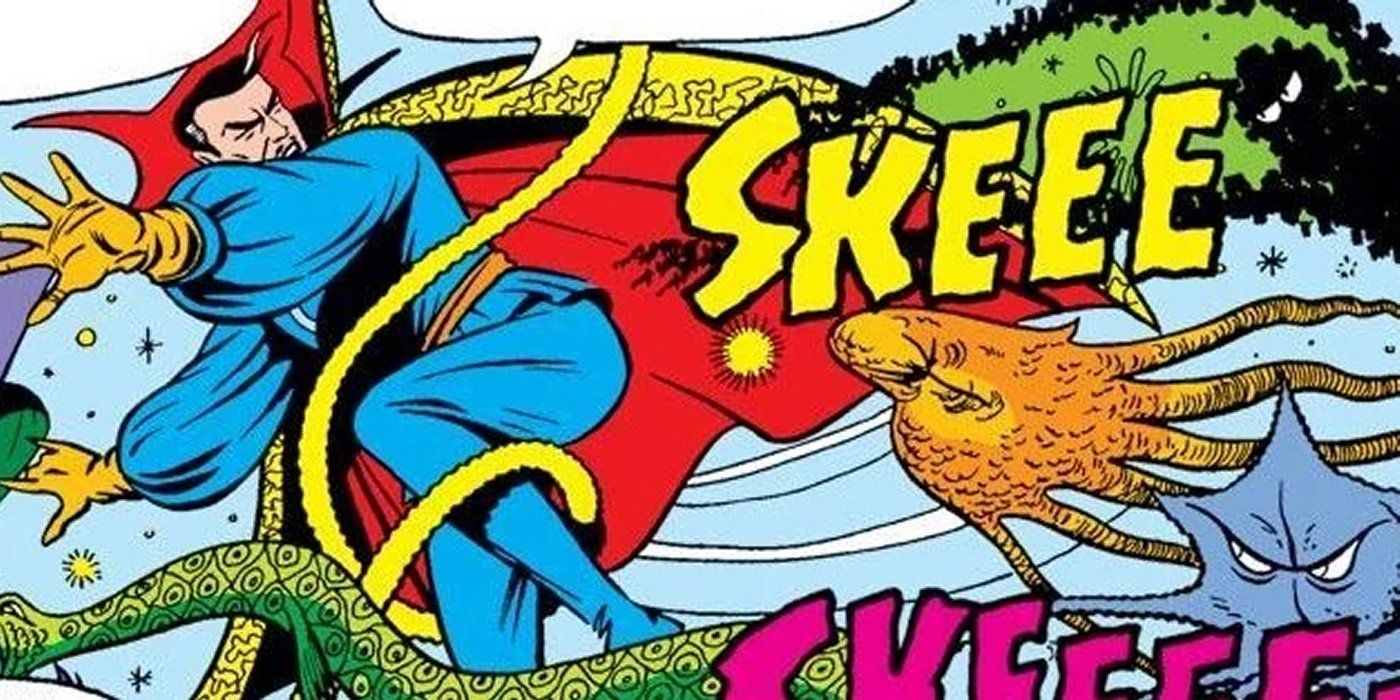 Doctor Strange is becoming a major force in the MCU in Phase 4, thanks to his recent spotlight in an episode of What If…? as well as the highly anticipated sequel to his 2016 movie and a major appearance in Spider-Man: No Way Home. His future is bright on screen, and his comic book past may hold some clues to where it’s going.

RELATED: 8 Sam Raimi Trademarks We Hope To See In Doctor Strange In The Multiverse Of Madness

Doctor Strange has been a major element of the Marvel Universe since its earliest days, and remains a key force in the present, with deep connections to the mystical dimensions of the comics as well as the centers of power in Earth-616. Comic book fans know they’ve only seen the beginning in the MCU for the Sorcerer Supreme.

10 Didn’t Have His Own Comic Book At First

Doctor Strange debuted in 1963, in Strange Tales #110. He was co-created by writer Stan Lee and artist Steve Ditko, with Ditko bringing in the original concept. Doctor Strange wouldn’t have his own solo comic for years because of the fact that Marvel Comics was actually dependent on DC Comics at the time for distribution.

The number of titles they could release in any given month was limited, leading Strange Tales, originally a horror anthology that started in the ’50s, to become a split book featuring Doctor Strange until issue #169, when it became a proper Strange title.

9 Clea From The Dark Dimension Was His First Love

In the MCU, Doctor Strange’s primary love interest so far is Christine Palmer. In the comics, his first major love interest was a woman named Clea. She first appeared in Strange Tales #126 in 1964 which happened to also be the debut of Dormammu, one of the most powerful entities in the Marvel Universe.

Clea is the niece of Dormammu and hails from the Dark Dimension. As the Sorceress Supreme of her dimension, she is one of the most powerful magicians in the Marvel Universe. It’s possible she appears at some point in the MCU, given her strong connections to Strange and Dormammu.

8 His Stories Held The Origin Of Eternity

Doctor Strange comics were the origin of a number of significant characters, including Eternity. Eternity is far and away one of the most powerful cosmic beings in the Marvel Universe and his debut in Strange Tales #138 began to expand the Marvel cosmos significantly.

As the living embodiment of the universe, Eternity opened the door to many more abstract characters, including the Living Tribunal, referenced in an episode of Loki and who first appeared in the comics in Strange Tales #157.

7 Shuma-Gorath Is A Key Rival Of His

Another major cosmic and magical being connected to Doctor Strange is Shuma-Gorath, who is likely to be of interest to MCU fans. Shuma-Gorath is one of the Old Ones, a tentacled monster from another dimension with the power to shape reality.

He debuted in Marvel Premiere #10 in 1973 and would become a major opponent of Strange over the years. He could very well be the tentacled monster glimpsed in multiple episodes of What If..? and if he is, he could appear in live-action in Doctor Strange In The Multiverse Of Madness.

6 He Formed The Defenders

Doctor Strange is nominally a member of the Avengers in the MCU, but in the comic books, he was the founder of another superhero team. Strange put together the Defenders, initially consisting of himself, the Hulk, and Namor, to combat another race of ancient squid entities, the Undying Ones.

RELATED: 10 Strangest Alternate Realities From Marvel Comics What If..? Series

Though the roster would morph considerably over time, and the team would come in and out of action, Doctor Strange remains at the head of the group and a new iteration that just debuted in Marvel Comics.

5 He Shared The Stage With Cloak And Dagger

Doctor Strange would ebb in and out of popularity over the years, leading to his sharing another version of Strange Tales in the 1980s with Cloak and Dagger. Following the cancelation of his first two volumes due to low sales, Strange returned to the title that originated him.

He only shared the book with Cloak and Dagger, characters who spun out of the Spider-Man comics, for 19 issues between 1987 and 1988. Doctor Strange returned to a full solo title. The third volume of Doctor Strange ran for several years before being canceled in 1995.

4 He Was Part Of The Midnight Sons

The mystical side of the Marvel Universe became very popular in the ’90s, leading Marvel to create the Midnight Sons brand for a subset of its comics, including Doctor Strange. During this time, Doctor Strange joined the supernatural team of the same name, made up of many members including Blade, Moon Knight, and Ghost Rider.

This group could potentially appear in the MCU, given the upcoming debut of Moon Knight as well as Blade. The Midnight Sons responded to many dark mystical threats, a number of which appear to be rising in the MCU.

3 He’s Part Of The Illuminati

Doctor Strange is part of many groups in the Marvel Universe and one of them, the Illuminati, is the most secret and possibly the most powerful in the comics. Consisting of Professor X, Iron Man, Namor, Mr. Fantastic, and Black Bolt, this elite group of heroes seeks to stave off major threats to Earth before they have a chance to emerge.

RELATED: 10 Things Only Comic Book Fans Know About Marvel’s What If? Series

The most significant and perhaps most controversial event that the Illuminati are involved in is the forced exile of the Hulk from Earth. The group casts him into space after he destroys much of Las Vegas, which leads to his landing on Sakaar and eventual return as a warrior king.

2 He Served As The Right Hand Of Doom

Avid comic book fans know Doctor Doom is one of the most powerful supervillains in the Marvel Universe. In 2015’s Secret Wars event, he was the most powerful, so much so he altered reality and Doctor Strange became his right hand on Battleworld.

Strange serves as Doom’s chief advisor in his cruel kingdom, where he has also forced Sue Storm to become his wife. Strange eventually rebels, aiding the resistance by releasing trapped superheroes into the false reality to fight Doom. For his betrayal, Doom kills Doctor Strange.

1 His Connection To The Darkhold

The Darkhold is a mystical tome and significant source of knowledge of black magic in the comics. It’s appeared in the MCU in WandaVision and might have a big future on-screen given Doctor Strange’s connection to it.

The Darkhold is actually the dark counterpart to the Book of Vishanti, the ancient book of white magic that Doctor Strange studies as the Sorcerer Supreme. Given that the Scarlet Witch is now in possession of the Darkhold in the MCU, Strange will likely be compelled to seek it out should she begin using chaos magic on a greater scale.

NEXT: 10 Best Alternate Versions Of The X-Men