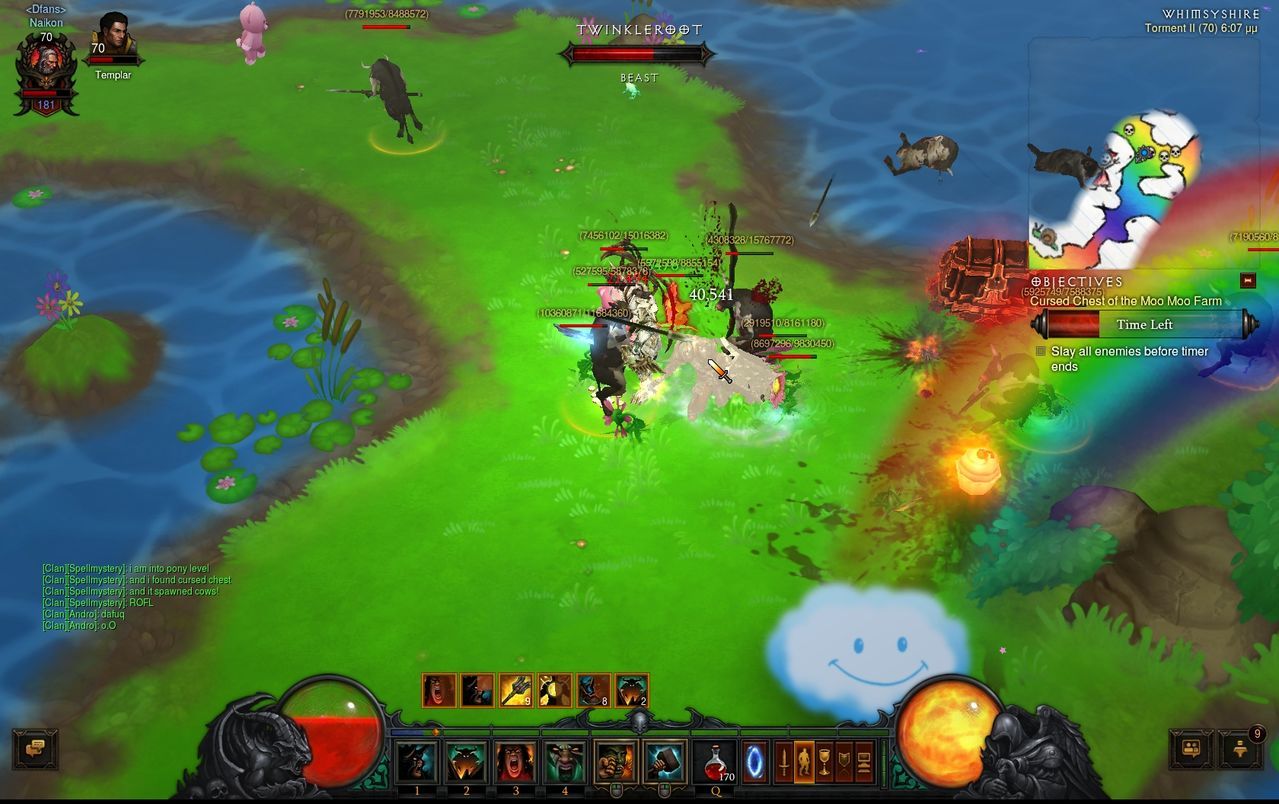 Blizzard Entertainment has been around for about 27 years and has given us hundreds of fond memories. From the rise of the Lich King, to the swarm of Zerglings rushing our base, to the founding of Overwatch. With Blizzard’s love for storytelling and world building also comes their love for easter eggs and hidden secrets. Who could forget the fantastic dialogue of the characters in Warcraft 3 when you click on them a bunch, revealing not only more depth of character but also making us laugh at the more serious moments of the story if we need the comedic relief? Blizzard never fails to understand their consumers and all the different types of ways that they entertain us.

With Blizzard Entertainment’s love for secrets also comes their love for hiding little, hidden locations for those daring enough to explore further into the vast worlds given to us. Hundreds of hours have been spent trying to solve the puzzles for hidden locations locked behind doors.

Take Diablo 3. The world of Sanctuary is home to many angels and demons, and as we all know ludicrous amounts of loot waiting to be plundered by some lucky adventurer; who would have known that there was that much tucked away into the game all of those hidden zones begging to be explored by the player? There are tons of hidden details tucked away if you’re daring enough to look for it. Let’s delve deeper into the dark fantasy world of Diablo 3’s hidden zones.

Truthfully the most spooky area in all of Diablo 3’s setting, with spooky enemies such as unicorns, teddy bears, and pink flowers. In order to enter into this weird landscape, you have to acquire a black mushroom, Leoric’s shinbone, liquid rainbow, Wirt’s bell, Gibbering gemstone, and the staff of herding. Once you have grinded your time away to get those items, you have to have the Staff of Herding in your inventory and head over to the Old Tristin Road. There will be a cow and a portal will open and take you to Whimsyshire..

Blizzard Entertainment’s clever idea for an end credits scene is found in the Cemetery of the Forsaken as a defiled crypt. Inside you can find enemies with names such as Jay Wilson and other mundane human names.

Finding your own name or a similar namesake must be quite surprising to players not understanding the gimmick of a hidden end credits area. Blizzard’s innovation never ceases to amuse players with making them end their own employees in a dungeon crawling adventure.

Similar to the defiled crypt with the haunting names, including Max Schaefer, the Quality Well is a dungeon that spawns in the Old Ruins in Tristin Road. Only this time, it’s the Quality Assurance team members.

That’s one way to get their names in Diablo.

This is another welcomed thank you from those at Blizzard Entertainment. It’s nice seeing those who spent long hours getting the recognition they deserve, even if it’s in a way that players have to hunt to find.

What makes this area hard to find is that you could play through the entire game and never find it, simply because it’s up to chance if you are able to go into the gardens. There are several more areas where it’s also locked away by chance.

This garden is hidden away and only accessible by a portal generated by at random. We have another area only accessed by adventure mode again here, and whenever you find this portal one of four different bounties will be available to you.

Not The Cow Level

Taking a page out of Diablo 2’s secret cow level, the Not The Cow Level can be accessed by finding Herald to the Queen. Defeat her and a portal will open into bovine madness. Watch out for legions of cow based enemies that will do everything they can do to make sure you don’t want to come back.

They’ve got some serious beef with you.

Once inside, there are events where you can fight the Cow Queen while being assaulted with cow based puns by the ghost of the Cow King.

Just when you thought Blizzard couldn’t add any more cow based levels, there’s always moo-re. Kanai’s Stomping Grounds can be found in a portal created by King Kanai in the Immortal Throne.

Honestly, the added comedic relief to a dark game is very relieving to have.

Within the stomping grounds are a couple of chests, as well as infernal bovine that can be found waiting inside for any adventurer seeking to make a few hamburgers out of that pesky livestock.

The Eternal Woods are part of the many zones you can find within adventure mode. The woods are relatively small in comparison to most areas, but is home to a few dozen skeleton hordes and hungry yetis, all ready to show you their blade or teeth.

To access the Eternal Woods, find the Ruins of Sescheron and head away from the gates. An otherwise passable area, these woods are still home to that sweet sweet lot that all Diablo players crave.

If you aren’t looking for it you just might miss this cave. Lots of little crannies in this area make this cave easily passable as just another dead end.

This mysterious cave can be found in one of two water in knocks in the Dahlgur desert.

Within this mysterious cave, the rainbow liquid can be found, which is needed to enter the horrible Whimsyshire level. Blizzard also did a number naming this cave to add to its mysterious ways.

The personal living quarters of King Leoric and his family members are yours to blunder if you can find the way to get into the quarters. Originally obstructed by debris, now cleared away by adventure mode, the home of the former can be found in Leoric’s haunted mansion.

There’s not much living in the quarters, honestly.

If you can find Queen Asyllan’s ghost, follow it and find she will guide you to some well-deserved rewards and more lore to read.

This is one of the more satisfying places to find yourself wandering into, since it’s filled with tons of gold and loot to plunder. The Treasure Realm is called many different things, such as the Vault or Greed’s Realm, and is home to many a treasure goblin and Greed herself.

Millions of gold coins are available to those lucky enough to stumble upon this world.

You get into the Treasure Realm by finding a treasure goblin. After the goblin is defeated, there is a small chance of a portal opens into this gold filled world.

These ruins cast a somber mood to any who choose to explore its depths. Filled with tons of barbarian lore and loot, the Ruins of Sescheron can be found in the Arreat crater in act 3. Within the ruins, there can be secret corners hiding hidden loot and riches for those with a keen eye.

There are lots of spooky ghost barbarians found within these ruins, but they are not hostile to you. Which is good because nothing sounds spookier than a barbarian ghost hunting you down.

Deeper within the ghost barbarian filled ruins of Sescheron is the Elder Sanctum. The sanctum is homed to more ghouls of Baal’s army of destruction. Once the mighty capital of the mighty barbarians, now fallen to Baal, not much can be found here but the remains of its former inhabitants.

Players often overlook this place, as it was introduced with adventure mode and it isn’t necessary to complete the story. However, venture deep within and you will find the legendary Kanai’s cube.

This is a harder to reach area than most, because there many steps in order to reach this zone. Yet another hard to reach area involving Barbarians, the Immortal Throne is the highest honor a barbarian can ever hope to achieve.

The immortal throne can be found to the north of Kanai’s cubes vault.

Multiple interactions can take place within the throne room, so be sure that the Immortal Throne doesn’t miss your list. It’s definitely worth seeing.

Entirely separate to the main story of Diablo 3, Greyhollow island has its own events, history, and most important of all loot. The area is accessed during act 5 of Diablo 3 in the world map.

A must see location for any adventurer.

Greyhollow island is surrounded with myths and legends, with sprawling forests and crashing waves. Many don’t even believe it exists, so it’s your job to go and find out the truth once and for all and make it back home alive.

What makes this a must-see tower is the rich history it has, as well as the difficulty getting there. Nereza the demon made her home here, as well as used it for her sacrifices.

This is a multi-leveled structure filled with crazed cultists. On every level of this tower, you can find high-level loot as well as the high cleric’s journals, which at the end of the day is what you need in life really.

Ever wanted to find the secret hideout of thieves and assassins and risk fighting one in the dark, all in the name of loot? Well, do we have the zone for you! The Guild Hideout can only be found in Act V of the game, as well as only in adventure mode. These combined with the vast array of enemies that spawn here make it a high-end zone. Inside this hideout you can find the unique leaders of the guild, waiting for you to slip up.

Unlocked in the second act of Diablo 3, the Shrouded Moors are, you guessed it, shrouded in mystery. Located in the north, not much is known of these moors. Some remnants of past human settlements can be found here. This being another area that can only be found in adventure mode makes it another difficult zone to find.

There is something unnatural about the Shrouded Moor, making even the most hesitant person seeking adventure and loot. Be careful of what lurks within these moors.

Temple Of The Firstborn

Deep within the Shrouded Moors lies the first location where humans first arrived in Sanctuary. In this temple lies many cultists who have done horrible things to humanity.

It’s not a very nice place.

This is one of the places locked behind adventure mode. This place is beyond creepy. The literal description of this place is “A place of evil, unlike anything you’ve seen before.” It sounds very inviting, doesn’t it? I know if it were up to me, I wouldn’t even touch this zone, with it being disturbing.

If for whatever reason the Shrouded Moors or the Temple of the Firstborn weren’t challenging enough to find and fight through, welcome to the Sanctum of Blood. The last part of the Temple, the demon Vidian has lured you in there, disguised as the adventure Daivin, to take your powers and use them for its own desires.

This is one of the most difficult places to reach in the game, because it’s at the end of a dungeon as well as being in adventure mode.

These are a proving ground for the Nephalem, testing your strengths against tons of monsters. These can only be accessed by finding a Nephalem obelisk and using a keystone to venture inside.

These are randomly generated dungeons, 10 floors each, getting harder as you progress.

The chances of finding loot here are very high, and even higher the more you venture into the rifts. Once the rift is complete, a boss will spawn. These rifts can be quite challenging and hard to find for even the most seasoned player.