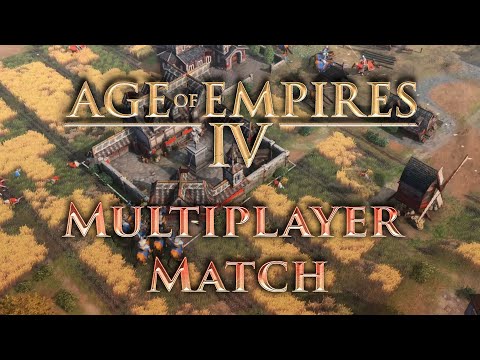 Age of Empires IV has some new gameplay footage, and this is a multiplayer match between two members of the game’s development team. In this multiplayer match, you can watch as the Rus and the Holy Roman Empire look to become the dominant force. This footage shows the sides building up their territories, gathering resources, and then going to war to claim the other’s land. As with previous Age of Empires games, resource management will be key to victory. The whole match takes just under 45 minutes so, it could be a decent watch if you want to see one example of how the multiplayer will work when Age of Empires IV releases.

Age of Empires IV features eight different civilisations, and will take you through each of them with four campaigns that span 35 missions. The civilisations include the Mongols and Chinese, Normans and English, Delhi Sultanate and more, with the story campaign spanning 500 years. If you’re a newcomer, the tutorial will lead into the story mode to get you up to speed with a spot of real time strategy. It wouldn’t do to throw everyone to the wolves in the game’s eight-player multiplayer modes, that’s for certain. After release, Age of Empires IV will be augmented with a World Editor to allow for user generated custom content.

Age of Empires IV was re-announced in April this year during a fan preview event, having first been revealed back in 2017. Age of Empires IV has been set for 28th October 2021. The game will be coming to PC, and as with all Microsoft games, it will be a part of Xbox Game Pass on PC from day one.