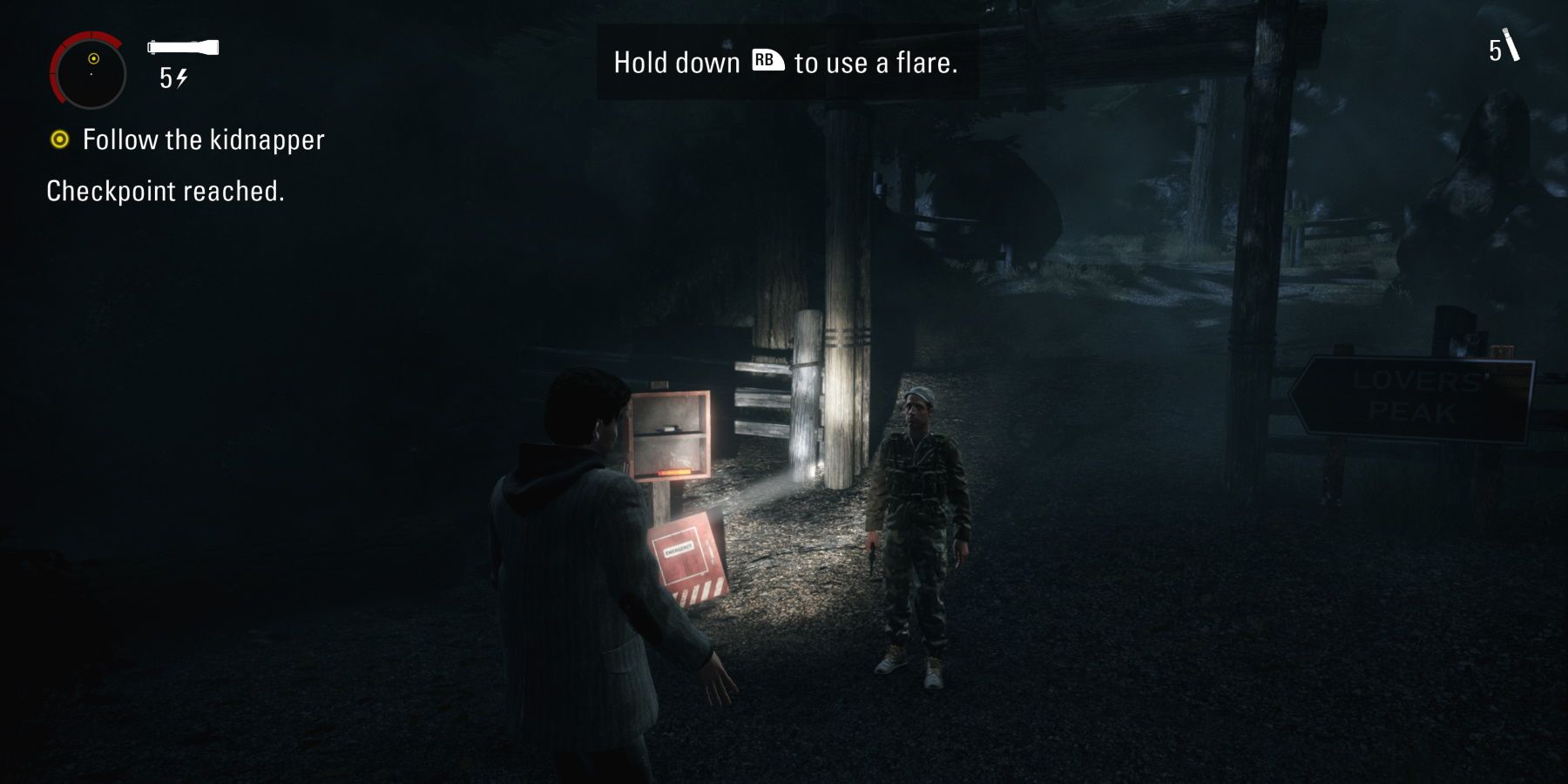 During Episode 2 of Alan Wake Remastered, Alan will lose his weapons and be forced to go up against the Taken with only a flashlight and some flares. It can be overwhelming, so this guide will explain how to survive while following the kidnapper, holding back the Taken, and defending the viewing platform.

As the story and gameplay elements are the same, this guide applies to both the original and remastered versions of Alan Wake.

RELATED: Rumor: Alan Wake 2 is in the Early Stages of Development

Following the Kidnapper in Alan Wake

After players complete the get to Lovers’ Peak objective in Alan Wake Remastered, a cutscene will play and Alan will be stripped of his weapons. Before following the kidnapper, make sure to pick up the extra flares in the red box beside him.

After collecting the flares, head up the hill, but don’t use them right away. During the objective to follow the kidnapper in Alan Wake Remastered, try and hold the enemies back by only using Alan’s flashlight. The Taken will try to surround Alan, but as long as he points with an enhanced beam (LT/L2 on consoles) they can’t hurt him. The kidnapper will shoot at the enemy Alan has his flashlight pointed at, but he’s a terrible shot. He tends to miss even more if Alan stands in front of him, so try and stay out of his way.

The improved framerate of the remaster is noticeable during a lot of busy gameplay moments like this, and it will be interesting to see how the leaked Switch port of Alan Wake will perform.

It’s okay to use one or two flares here if players need to heal in Alan Wake Remastered, or are getting overwhelmed by enemies. Just make sure not to use too many as they will be needed for the following two objectives.

Hold Back the Taken in Alan Wake

After the kidnapper has killed the first wave of enemies and reached the locked door at the top, Alan will have to hold back the Taken while he unlocks it. Try to use the flashlight until Alan starts to get surrounded, then pop a flare. Keep in mind that the enemies will come from the left and right sides, so try and keep in the middle and ensure they don’t get past.

There are more flares and batteries in the red box beside the door. Although Alan Wake Remastered has removed product placements seen in the original, so they aren’t Energizer-branded anymore.

Alternate between the flashlight and flares, and it shouldn’t be too hard to hold back the Taken, even on Nightmare difficulty. However, try not to use more than three flares during this objective if players want to have an easier time defending the upcoming platform. The light effects from the flares and flashlight here look even better if playing Alan Wake Remastered with good PC specs.

Defending the viewing platform is the hardest objective players need to complete with the kidnapper in Episode 2. After going through the door and recovering health at the Safe Haven, players will eventually find themselves at the last platform. Make sure to pick up flares and batteries in the red box in the middle.

At first, the enemies will only come from the woods, so don’t worry about checking behind Alan. Just keep the flashlight pointed at the Taken and boost the light when possible. As Alan Wake isn’t a horror game that relies on jump scares, there’s nothing scary to worry about here either. Pop a flare if low on health, but try not to use more than one or two.

The next wave of enemies will come from the sides of the platform and the cliffs above, closely followed by more emerging from the woods. This is where players can start to use their flares liberally, as it can be hard to use the flashlight on all of the enemies and point where the kidnapper should be shooting at the same time. Using dodge (LB/L1 on consoles) can help avoid getting hurt when an enemy comes charging.

It’s best to throw the flare on the ground and keep the flashlight pointed at one target instead of holding a flare. The kidnapper isn’t very good at choosing where to shoot, so Alan’s guidance with the flashlight can help clear the encounter quicker. Once the Taken have been killed, another cutscene will play and Alan will finally get a weapon back.

Alan Wake Remastered is out now for PC, PS4, PS5, Xbox One, and Xbox Series X|S.