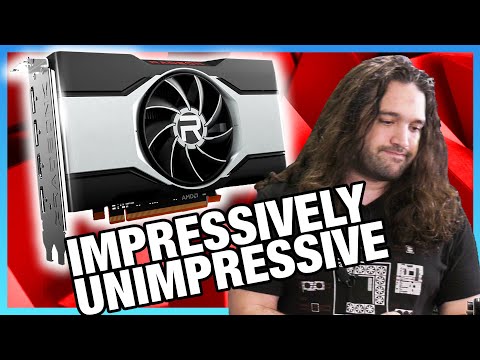 AMD’s latest RX 6000 graphics card release may come as a surprise given how the company has devoted little fanfare towards its launch, with the majority of information about the GPU coming from leaks over the previous couple of months. The RX 6600 features less cores and memory bandwidth than its more powerful sibling, the 6600 XT, but retains the same 8GB of GDDR6 VRAM with the added benefit of a lower TDP.

Specifications are all well and good but now the $329 card has been benchmarked by third-party reviewers, and we have a clear indication of how well it performs versus other GPUs, like its direct compeition the Nvidia RTX 3060.

It’s important to keep in mind that there’s no reference card design for the RX 6600, like there wasn’t for the RX 6600 XT, so cooling and rasterisation performance will vary depending on the brand of card that’s tested.

Even if the world wasn’t experiencing an unprecedented chip shortage, which has caused component prices to skyrocket and the idea of product availability become laughable, the RX 6600 doesn’t appear much in the way of value. If you’re particularly power conscious, the 132W TDP may appeal to you but otherwise you might be better off with Nvidia’s RTX 3060, thanks to its superior ray tracing performance and larger 12GB of VRAM for the same MSRP.

Unfortunately, we are living in the hellscape conjured by the aforementioned shortage, which means the recommendation of the RTX 3060 comes with some unavoidable caveats. If luck is on your side and you find any modern GPU at MSRP, in this market, you’ve struck gold and should probably buy a lottery ticket. The likelihood is, however, that we’ll have to wait until next year before good value graphics card deals become more commonplace.