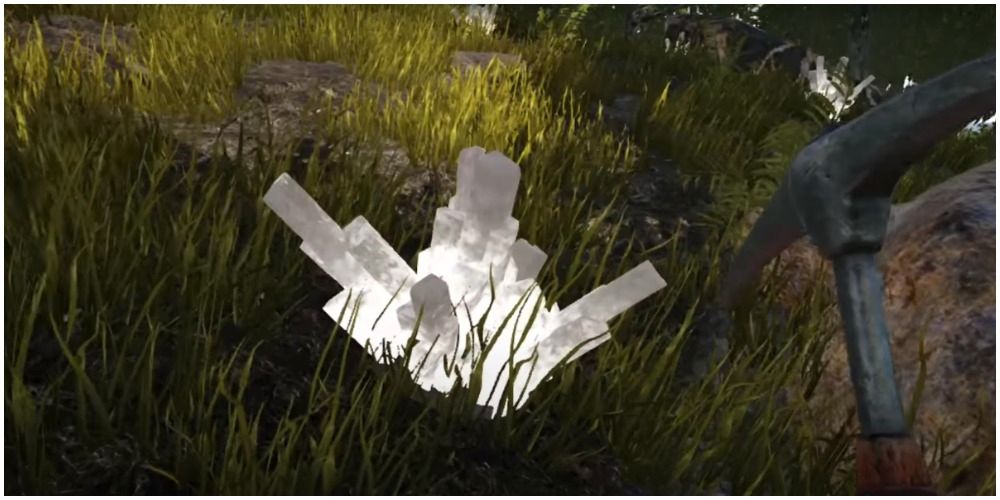 Crystals are a very versatile resource in ARK: Survival Evolved, as they can be used to make ocular devices, electronic components, or even powerful explosives and more. As such, players will want a ton of these crystalline goods, and, thankfully, there are plenty of ways to harvest them.

RELATED: ARK: Survival Evolved – Everything You Need To Know About Voidwyrms

Since Crystals can be found sporadically all over the place, it is best to find a farming area that is loaded with dense amounts of the stuff instead of traipsing all around the various regions in ARK: Survival Evolved to find them. There are also better methods than others for farming based on one’s preferences and equipment as well as the player’s non-human allies.

Where To Find Crystals

Regardless of what map one is on in ARK: Survival Evolved, Crystals tend to spawn the most on top of mountains as well as in caves and in snow biomes, so these are the places that players should look first if they are seeking Crystals. While their most common harvestable node appearance is as geometrical bursts of white growth, Crystals can also be found within the stalactites (the ceiling spikes–not the ground ones known as stalagmites) of caverns.

RELATED: Ark Survival Evolved: How To Find & Tame A Maewing

Where To Find Lots Of Crystals

If players don’t want to manually search for the spawn points of nodes that yield Crystals, players can check out a very detailed interactive map for more specific location information regarding this resource (and more).

A great spot to remember for farming Crystals is a mountain in the northeast part of The Island map called The Frozen Tooth (Latitude 35; Longitude 58). There are tons of white crystal growths to be found at the summit, however, since the slopes are very steep, it is recommended to fly there and back for convenience and efficiency.

The Best Ways To Harvest Crystals

Most players will simply use a Pickaxe of some kind to harvest Crystals from the nodes that drop them, however, this is not the only option–in fact, it’s not even the most efficient. The 2 creatures that can allow players to gain the most Crystal per action are Dunkleosteus and Ankylosaurus. These animals are much better optimized to gather and hold tons of Crystals in their inventories, so definitely consider bringing one of these organisms along the next time one sets out to farm Crystals.

When compared to a Metal Pickaxe, the aforementioned creatures are more efficient, however, the Mantis is also quite handy in gathering Crystals due to it possessing the same effectiveness as a Metal Pickaxe.

Though, with all that said, getting either a Dunkleosteus or Ankylosaurus up a steep mountain or into a deep cave can pose obvious logistics issues, so, players may wish to swap out a bit of Crystal-gain efficiency for mobility-related convenience. Despite gaining somewhat fewer Crystals per action than even a standard Metal Pickaxe, a Phoenix can still be very useful for harvesting nodes that drop Crystals. The lack of harvesting efficiency is offset by the fact that Phoenixes can travel much faster than most other creatures and can allow one to travel between their favorite Crystal farming spots much quicker while not having to dismount, making up for the less ideal Crystal-yield by speeding up any and all traveling needs.

What Crystals Are Used To Craft