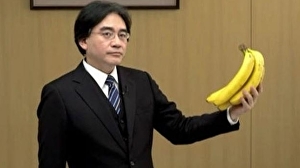 In 2015, so many of us mourned the passing of Satoru Iwata at the all-to-young age of 55 as if we'd lost the closest of friends despite never having met. The impact of Nintendo's most charming leader is beautifully illustrated in Ask Iwata, a collection extracted from interviews conducted with friend and frequent collaborator Shigesato Itoi as well as from Iwata's own celebrated interviews with his developers.

Here was a man whose ambition was simply to make everyone happy, something he achieved on a scale that's almost unimaginable: anyone who's ever played a Wii or DS, the phenomenally successful consoles that opened up gaming for all and are perhaps his greatest legacy, will be able to appreciate that.

Ask Iwata's a curious book, although one that ends up just as valuable an insight to Nintendo as something like David Sheff's Game Over or Osamu Inoue's Nintendo Magic, if not more so. This isn't the place to find out rich new detail or gossip about what went on behind those unremarkable office walls in Kyoto during the remarkable era Iwata guided Nintendo through; instead, it's a chance to better understand the man who put those pieces in place as he talks through his philosophies and approach to management.