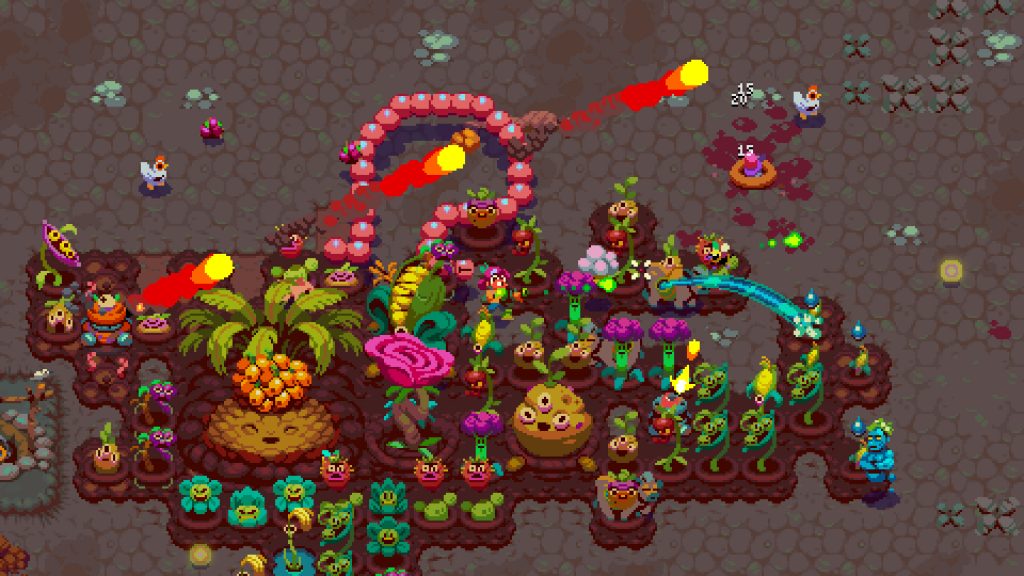 As previously reported, the game sees you inheriting a farm mere moments before the nuclear apocalypse. Now you must defend your “ultra-GMO” crops from mutated pests and bandits. You can also marry townsfolk, who then fight along side you.

The focus of the new update is the Deervil’s Den location, a dangerous new area packed with tons of upgrades to find. The update adds a new tractor, a new item, the ability to turn weeds into flowers in your garden, and dozens of new upgrades.

You can read more about the update here, and find a trailer for it below.

In Atomicrops you will…
Farm by sowing and harvesting as many fast growing crops as you can before the day is done to earn a huge profit.

Explore the far reaches of the biomes to find useful relics of farms long past. Powerful loot increases your farming abilities and helps you fight enemies.

Defend your crops. Fend off nightly attackers looking to eat your crops and leave you starving. Or dead.

Fight challenging bosses each season until you reach the final season – the Nuclear Winter.

Befriend an entourage of pig pals, chicken chums and cow colleagues to automate farming tasks. Woo and marry a kindred spirit from the local town to fight and farm alongside you.

Permanently Upgrade your farming and fighting abilities. Earn a special currency each run that can be used on permanent improvements and unlocks.

Die. Even the easiest difficulty will put your skills to the test. Victory is rewarding and hard earned.

Unlock new characters, spouses, difficulties, and permanent upgrades. Most importantly, you can unlock many cats to permanently roam your homestead (yes, you can pet them).

Play again! Atomicrops is designed to be heavily replayable with new surprises and item synergies to be discovered in every run.

About
Modern city life got you down? Well, you’ve just inherited your late uncle’s farm. Time to pack your bags and start fresh in the peaceful countryside. What could possibly go wrong? A nuclear apocalypse, that’s what.
Now you’re in a hellscape wasteland defending the last surviving source of sustenance – your crops. And every mutant wants a piece. Do as any self-respecting farmer would: Farm. Marry. Kill.

Atomicrops is available on Windows PC (via the Epic Games Store, GOG, and Steam), Nintendo Switch, PlayStation 4, and Xbox One.