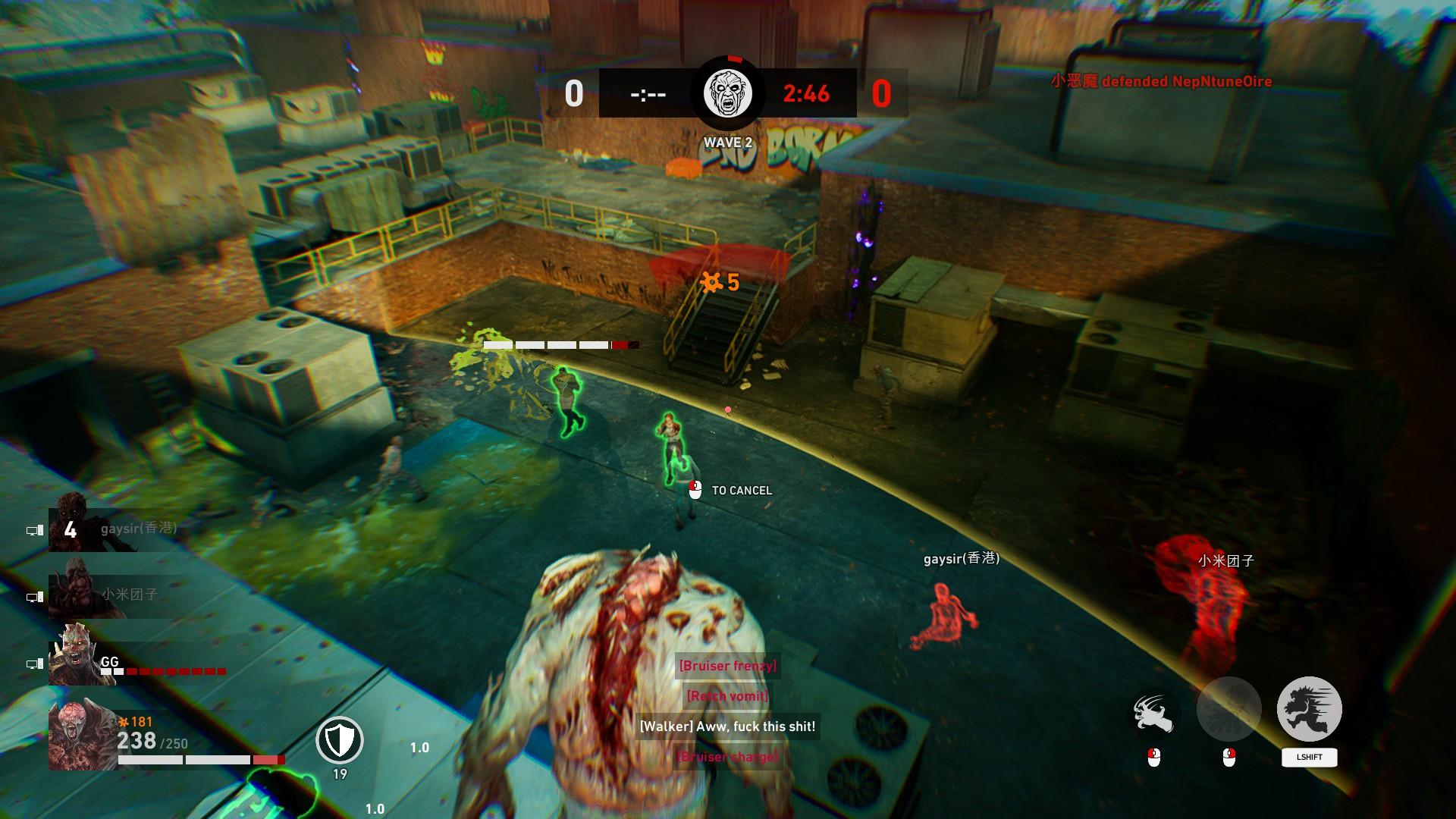 Back 4 Blood is the newest game from the creators of the Left 4 Dead series, and it is Left 4 Dead 3 in everything but name. With their newest game, however, Turtle Rock Studios craft an exciting, thrilling, brand new experience that carves out its own unique place in the gaming world. 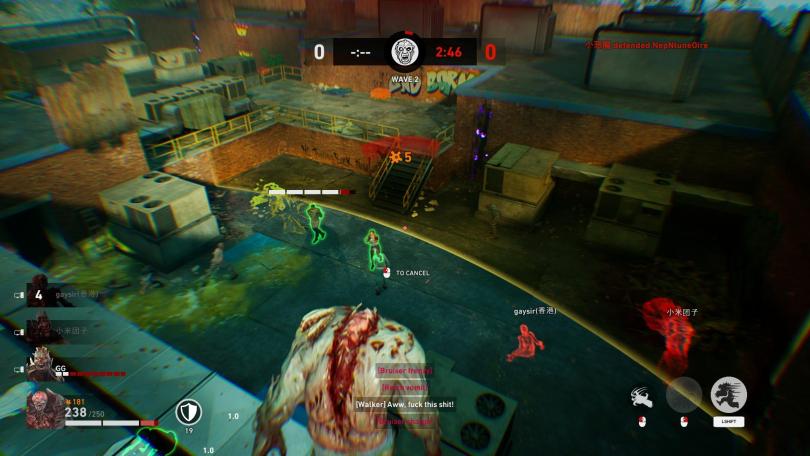 Visually, Back 4 Blood looks amazing. While it isn’t the most visually impressive game, it looks rather stunning on PC. There are little details in the environment and barely any poorly textured areas. Each location has a staggering amount of attention to detail, with different areas feeling distinct and unique while providing a memorable place to die in. Lighting in each new map is well done, and the environments look surprisingly realistic in comparison to other recent FPS games. The sounds of bullets coming from guns are crisp, and they feel really good to use with satisfying sounds and looks to them.

Zombies and character models look better than they should, with guns especially looking great, as blood flies everywhere, getting on your characters and their gear. Back 4 Blood looks and feels like a fitting game in the current generation, with its stunning textures, wonderful environments and diverse landscapes. The Ridden, in addition to their lairs and areas, are disgusting to look at, befitting of the theme and atmosphere, as they add a layer of fear and unease to each new level, with unique designs for each new enemy that helps distinguish them despite their initial similar appearances.

Despite the impressive quality of the visual and audio aspects, Back 4 Blood has some more concerning issues. During my first night of playing, I encountered a crash that had my game stop right before the big battle at the end of a level. The friend I had made during this game also encountered numerous crashes during that one night and had to constantly rejoin each run. Another issue is in the bots, as they can often find themselves running in place, getting stuck indoors and such. These bots are also often pretty stupid, and that needs no explanation. One final yet minor technical issue is how zombies that are out of bounds seem to die in one hit from any gun, even the shotguns, which are usually only good up-close yet have a shocking range.

Cleaning up the Ridden 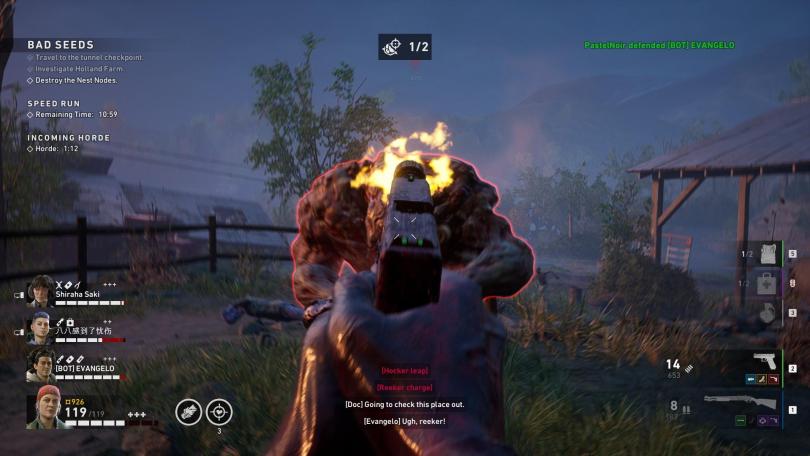 Surprisingly, there are some actually engaging backstories for the characters you play as, especially the undoubtedly unforgettably badass Mom, whose dialogue shows hints as to a history of having lost her son. The allusions to the histories and pasts of each character provide an interesting life with each character-led, from the conspiracy theorist to the doctor, assisted greatly by the convincing voice performances across the board. Conversations and dialogue between them are welcome, and much like Ellis from Left 4 Dead 2, they each have nice stories to tell.

The collapsed buildings and ships crashed onto lands where they usually wouldn’t provide a welcome layer of environmental storytelling that was barely present in the previous games. Safe rooms and their deceased occupants hold a lot of mystery and details, with notes left behind by previous occupants detailing things from mundane greetings to threatening warnings of the foes to come. There is a certain sense that the enemies fought in this game are just a part of a larger occupying force and the periods before and after the game’s events. 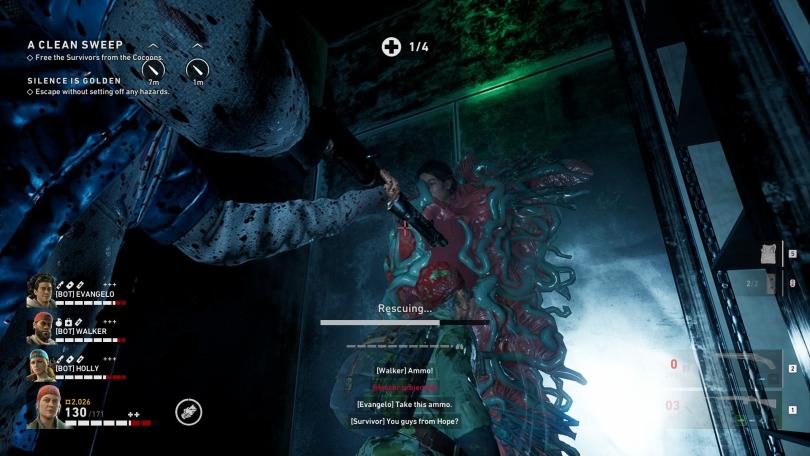 One of Back 4 Blood’s best aspects is its progression system, which never quite feels unfair, yet leaves you coming back for more of the game once you are done with it. The card system is one that could potentially fall prey to the microtransactions one sees in almost every other game nowadays, but here, everything is earned from completing levels and beating challenges. The different customization options in the game are varied and interesting, and while there are only a few as of now, there are sure to be many more to be added in later updates.

Each new upgrade is a reasonably priced addition to your arsenal and card deck, and as you earn more cards, you start to notice the many possible playstyles and tactics one can utilize to fight back against the hordes. Different game modes allow for different decks to be made, and while it may initially be overwhelming, one can manage it with the filters and search bar to help find the perfect card for loadouts.

Thanks to the Director, each new run feels like a brand new experience, and it always manages to be replayable thanks to the different potential card decks and corruption cards played by the Director prior to the start of each mission. While the randomized cards on the part of the AI can be a little frustrating to deal with, it’s almost always a welcome challenge. Some cards, especially the fog, can help bring even more terror to the levels, as areas can be shrouded in darkness, providing an uneasy atmosphere. The inability though to pick your starting point in a quick game is a slight drawback, as you’re left scrambling through places you’ve already been through multiple times.

Your Missions, Should You Try to Survive Them 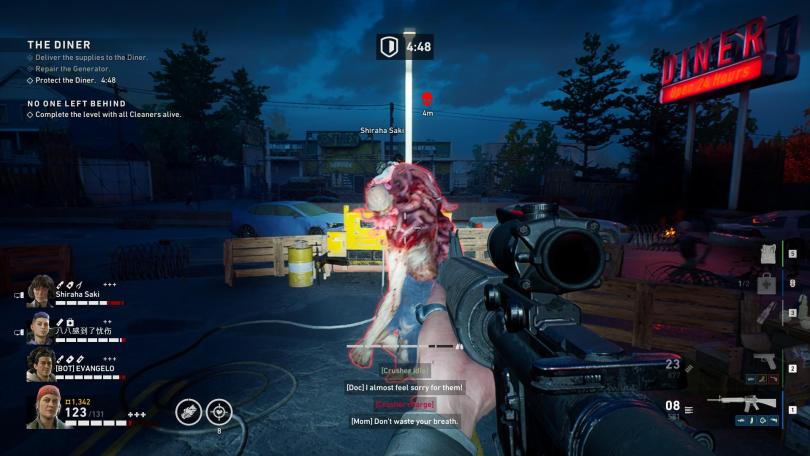 The biggest draw of the game is its campaign, which is split into 4 acts in a manner reminiscent of prior Left 4 Dead games with a major difference. Instead of the usual 4 acts, there are a varying amount of missions in each act, some even having more than 10 levels in them. Level variety is plenty, with many missions choosing to not follow the usual “get to the safe room” objective as its primary motivator, but instead opting to have you rescue survivors, deal with bosses, or collect materials, among others. Other missions have a larger emphasis on stealth, with teams forced to be wary of doors that could alert hordes if not dealt with using the proper tools. A lot of these levels feel like the finales of the acts in the older titles but spread out to be in more areas. One particular highlight is a mission involving a jukebox, which ramps up the excitement to a new level.

Sadly, the Solo campaign does not offer any achievements nor progression, which does not help the fact that the AI teammates are absolutely useless, refusing to acknowledge enemies that have already been marked unless they are right in front of them.

As with the previous Left 4 Dead titles, the Director makes a return, this time, playing cards of its own to make your life in the post-apocalyptic world a living hell. Sometimes, it can go easy on you, but often, it will make things incredibly overwhelming to the point of an unprepared player being swarmed by many of the game’s most powerful enemies. It is extremely stupid for one to go into a game on the Veteran difficulty without any good cards, as the early ones that a player gets quickly get phased out due to the many, many better ones from Supply Lines. When the game is providing a challenge, it is constantly fun, but the steep learning curve and randomly generated difficulty provided by the Director can lead it to be occasionally frustrating, even on the Recruit difficulty level. Sometimes, the difficulty can struggle to find a solid balance between being fair and challenging, though hardcore fans will enjoy the higher difficulties, especially Nightmare.

The new Mutations of the Ridden are welcome to the series, as they help shake up gameplay and, despite being put into three classes, are all distinct and strike fear into a team. Different kinds of enemies help keep the game exciting, and when they all come together against a strong and well-prepared team, Back 4 Blood shines. Birds aren’t as threatening as the Witches, likely due to how they don’t attack you, but they do call upon a Horde to attack you instead. One particular enemy which acts more like a Witch that I was not prepared for took me by surprise and actually terrified me with its design and what it does upon catching you, and is best experienced blind without any prior knowledge of what else it does. Boss battles primarily focus on simply shooting at a weak point and dealing with other Ridden, but they are all fun and memorable with their grotesque creature designs and quick thinking needed to survive.

Different cards and attachments allow for different ways to tackle the many enemies and hordes that one will come to face off against. Sometimes, it can feel a bit too easy, thanks to some powerful cards, but the Director will keep things balanced later on. Some missions have rooms switched out on replays so that each approach to a level is fresh and unique and keeps the player on their toes as to what will be lurking around the dark corners. Much like the older games, rarely a single game in the 20 hours I’ve spent on the varying difficulties have ever felt similar to one another. 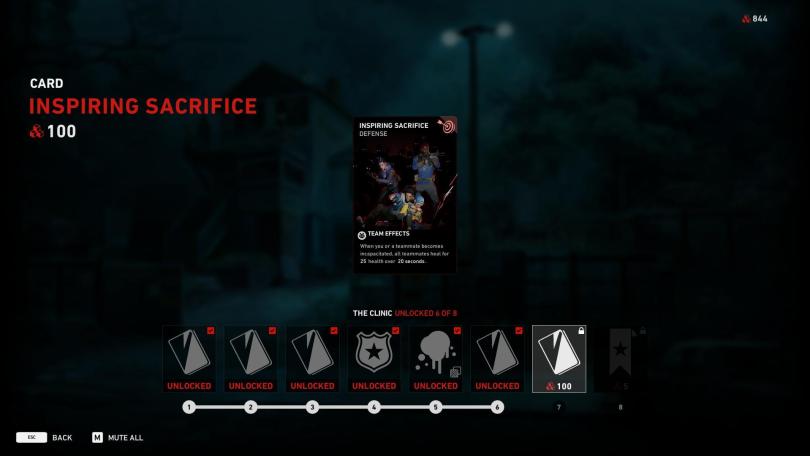 Gunfights and battles in Back 4 Blood take inspiration from more modern shooters like Call of Duty and combine them with the tactical approach of games like Rainbow Six Siege, in how the game requires collaboration between players. In the higher difficulties, there is a sense of fear and tension, as enemies do far more damage, and friendly fire is lethal. At times, ammo conservation will play an important factor in whether or not you survive, bringing the surprising addition of elements from horror shooters such as Resident Evil into the game’s mix of genres. On the Recruit difficulty, however, one instead feels like they are playing the original Left 4 Dead games on Normal difficulty mixed with Doom Eternal thanks to the power that players have while still providing a decent challenge.

Shooting in the game feels smooth and responsive, and as per usual, headshots are the most reliable way of dealing with the Ridden. All kinds of weapons prove themselves to be immensely useful and satisfying to play with, and being able to place attachments but not manage them adds an extra layer of depth and thought to the proceedings. Weak points on the Ridden are occasionally hard to hit as a result of constant movement but are usually easy to target and make things easier, despite sometimes feeling like bullet sponges.

Playing as the Ridden in Swarm is a welcome change of pace, as it gives players a sense of power while still being as vulnerable as the actual in-game Ridden are in the campaign. Swarm is a rather basic game mode, and though it is fun, it is hard to see it maintaining as much interest as the extremely popular campaign.

The campaign’s emphasis on tactical playstyles and careful card usage in addition to proper teamwork while still maintaining the horde shooter origins help separate Back 4 Blood from many other first-person shooters, as it manages to smoothly combine different aspects from multiple genres for a rewarding yet challenging experience. As mentioned earlier, there is a learning curve to the game that is initially frustrating, and this may put off casual players who will be limited to the Recruit difficulty if they want an easy playthrough similar to the Left 4 Dead games. 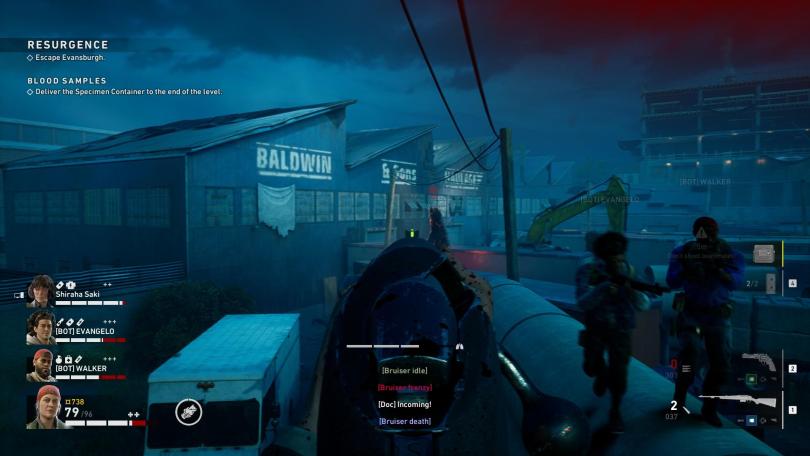 Despite seeming like it would just be Left 4 Dead 3 in its promotional material, there is a layer of depth and strategy that wasn’t present in the older Left 4 Dead games thanks to the amazing new Card system and fresh gunplay. While there are some issues regarding the game’s technical performance as well as balancing the difficulty, Back 4 Blood manages to carve out a new space in the world of First-Person Shooters through its unique and refreshing blend of genres that will satisfy new and old players, and keep you going back for more once you’re done.