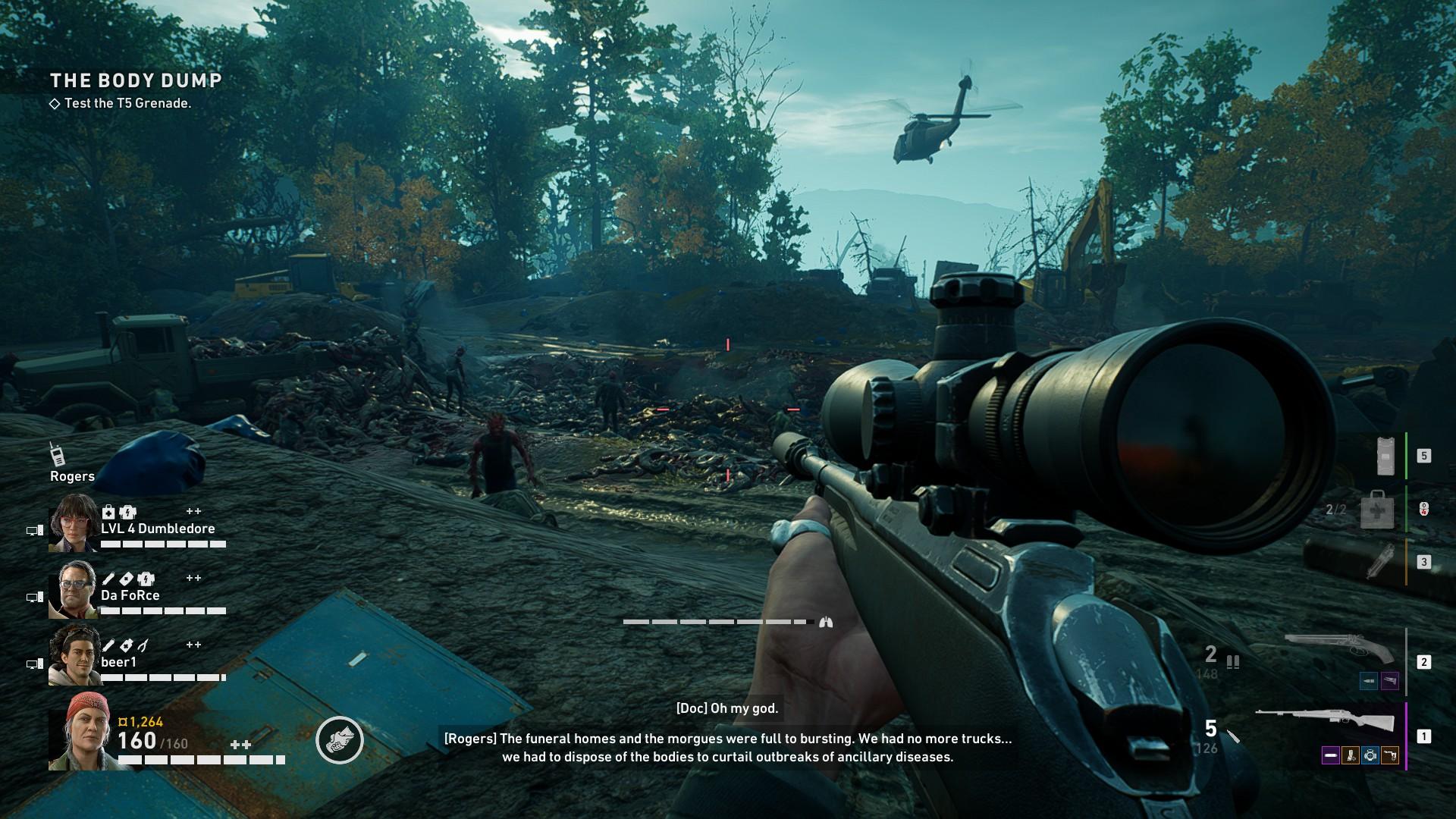 Back 4 Blood is many things, but to many people’s surprise, one of those things is difficult. Thanks in large part to the Director, the name of the AI that makes each game brand new and unique, games can either be very easy or tough. Here are some tips and tricks to be able to survive in the post-apocalyptic land of Turtle Rock Studios’ latest title. 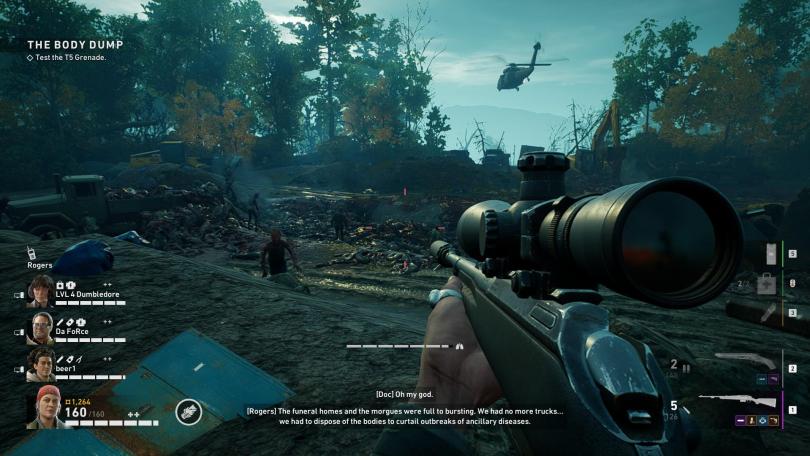 Never be afraid to swap out your favourite weapon for another one because the chances are that your weapon will easily be outclassed by others later on in the game. Back 4 Blood features weapon attachments of varying rarity, and some can be bought at the start of a level in Safe Rooms. They won’t cost much, and so long as you know how much you have and how much you’re spending, they can be invaluable.

Some weapons will also be powerful in a skilled player’s hands, with weapons like the Barrett M95 being a tremendously powerful sniper rifle, and the Ranch Rifle being a fundamental but still powerful weapon if you land headshots, but even then, every weapon feels like a viable tool to use against the Ridden if you have the Deck for it. Different weapons can be used based on different decks, with melee builds and some weapon-specific cards being available that will definitely help if you’re focusing on something specific.

You will NEED to grind.

It takes quite a lot of time building up your card collection before you have a decent enough deck to run on the Veteran difficulty. The starter deck consists of only five cards that may be fine at the moment, but on the tougher difficulties, it will be useless without any others. You will eventually need to use the Supply Lines to be able to collect more cards and help create a better and more competent deck for the hordes of Ridden that you will face.

Getting points to get cards may seem like a chore, but it will be worth it. It is recommended that you grind on Recruit first since the Veteran difficulty is insanely brutal on the unprepared. 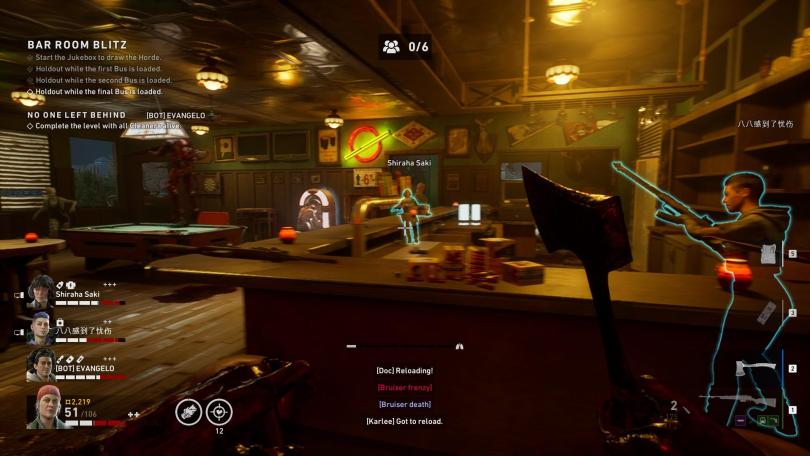 Building a proper deck can take a few minutes, but a good deck is invaluable. It is best to communicate with your team, so having a specialized deck taking on a specific role would be a good idea. You can match cards together to gain bonuses and nullify any potential side effects, with one example being how one card that increases reload speed by 30% has a side effect of losing 5% damage resistance, which can immediately be undone by another card that gives 5% damage resistance and five health.

There are so many possible combinations and decks that can be made to help make your playthrough unique and fun. The aforementioned melee decks are one such example, but some cards that increase movement and disable sprint and aiming down sights allow players to return to the glory days of Left 4 Dead. The possibilities are practically endless for what you can do, and that different decks can be used for different situations. However, worth mentioning is the fact that you can have only 9 Decks (including the Starter deck, which you CAN edit), so only have what you want in each Deck.

Some of the most fun I’ve had is playing with guys communicating or with microphones in a Discord channel. While not everyone has a microphone to talk to their teammates, communication is at least great using text chat on PC platforms. The aforementioned Decks can be altered to specifically fit one role while your friends and teammates take up others, with one friend of mine using Doc and having a deck focused on healing teammates.

Communicating to have a team working like a well-oiled machine is one of the greatest feelings one can have playing Back 4 Blood. Having a premade team is incredibly useful on the greater difficulties, thanks to being able to plan out your decks and let your allies know your plan, so you aren’t going at it alone. 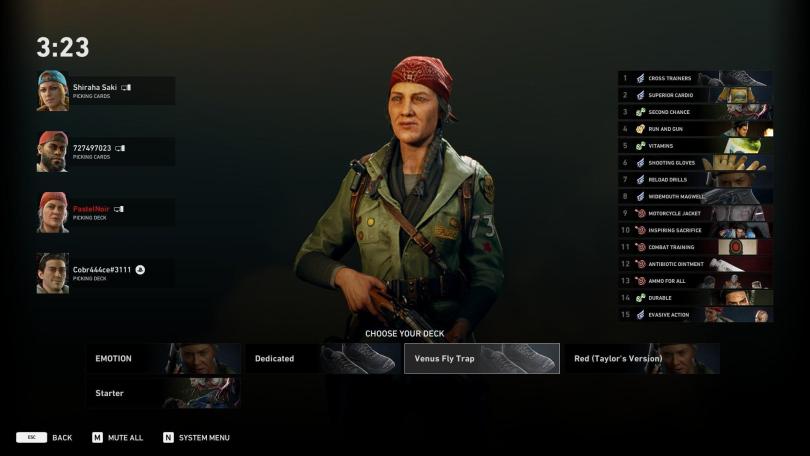 Probably one of the best cards in the game so far is Down in Front, which will give you not only ten health but keep you safe from Friendly Fire so long as you’re crouching. Friendly Fire in this game can be brutal, and health is essential, so making sure you don’t accidentally die as a result of bad positioning or poor aim is a true lifesaver in a game like this.

Trauma damage can kill you. Unless you use the health stations that may be scattered around the area, you won’t regenerate health. There are also some cards that can be purchased that will either give you trauma damage resistance or heal trauma damage at every start of the level. It is also recommended that you save up your copper for the times you do

find those health stations, which cost 400 after one free charge on Veteran, in addition to healing whenever you can to keep at maximum health.

Some locked doors aren’t worth opening… 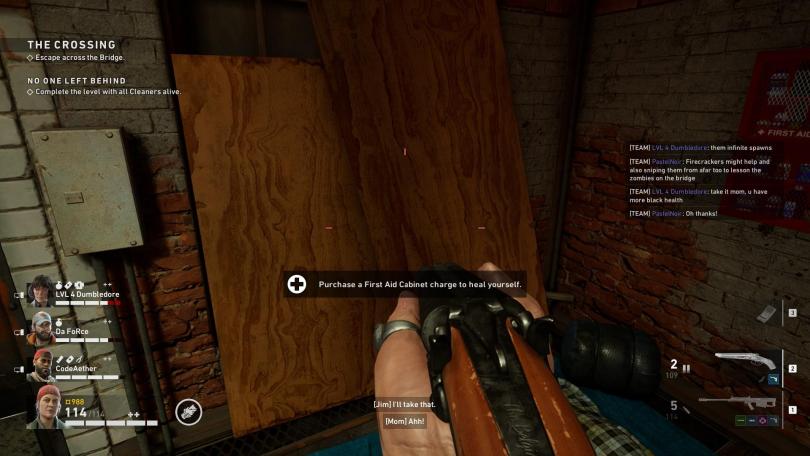 Locked doors can provide some life-saving materials, but there is also a possibility that you will get absolutely nothing that you need. That locked door may seem useful, but if you waste your Tool Kit opening it, you might end up with just some attachments that are practically useless. Tool Kits are best saved unless you are absolutely sure you can use them or unless you or your team has spare Tool Kits.

Be a team player

As mentioned earlier, communication is the key to survival. You have to coordinate how to play objectives, obviously, but other than that, no one survives long in Back 4 Blood leaving their teammates to die. When a teammate is down, fight off Ridden to get them back up; when someone needs ammo, give them some spare rounds; when a teammate takes a lot of trauma damage, give them the free charge at the medical station. Never prioritize yourself. If you can text or use a microphone, use it, as it makes everything easier.

Another great tip is to use cards that will help with your teams, such as increased ammo capacity and health for everyone, though these will usually have some drawbacks that will lessen some of your other equipment and stats, so try to prepare other cards to nullify the negative side effects as much as possible. 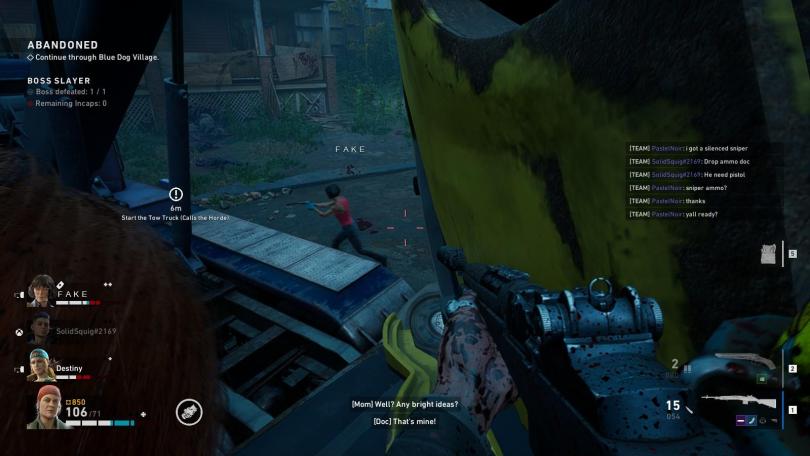 One of the biggest and most unexpected obstacles in Back 4 Blood is running out of ammo way too soon. While there are cards that will help increase your ammo capacity, always be careful with your shots since you may not realize that you’re burning through your magazines. For example, the M1A Sniper Rifle is the fastest firing sniper rifle, but with that, you may end up with barely any bullets left thanks to how few sniper rounds you will have. It is best to conserve your bullets through careful headshots and shooting multiply Ridden at once with bullet penetration on guns like the snipers.

It is advised to always be on the lookout for supply crates and boxes holding ammo, and as mentioned earlier, don’t be afraid to ask for spare bullets from your team. Another possible option is to get the ammo box, though you will have to give up using the other supplies available. For your magazines, don’t hesitate to use the bash as it doesn’t interrupt the reload, proving to be incredibly useful when you run out of ammo in fights against the hordes of Ridden.

Be careful with your stamina.

Another surprising problem in the game is stamina. Now, there’s a stamina bar that gets affected by sprinting and using melee weapons. As with every other issue, you can equip cards to alleviate those issues, but it doesn’t make it any easier. Always have a little bit of stamina left; otherwise, you’ll be left behind while your team is running away from a big horde of Ridden.

Check out our Review of Back 4 Blood by clicking here