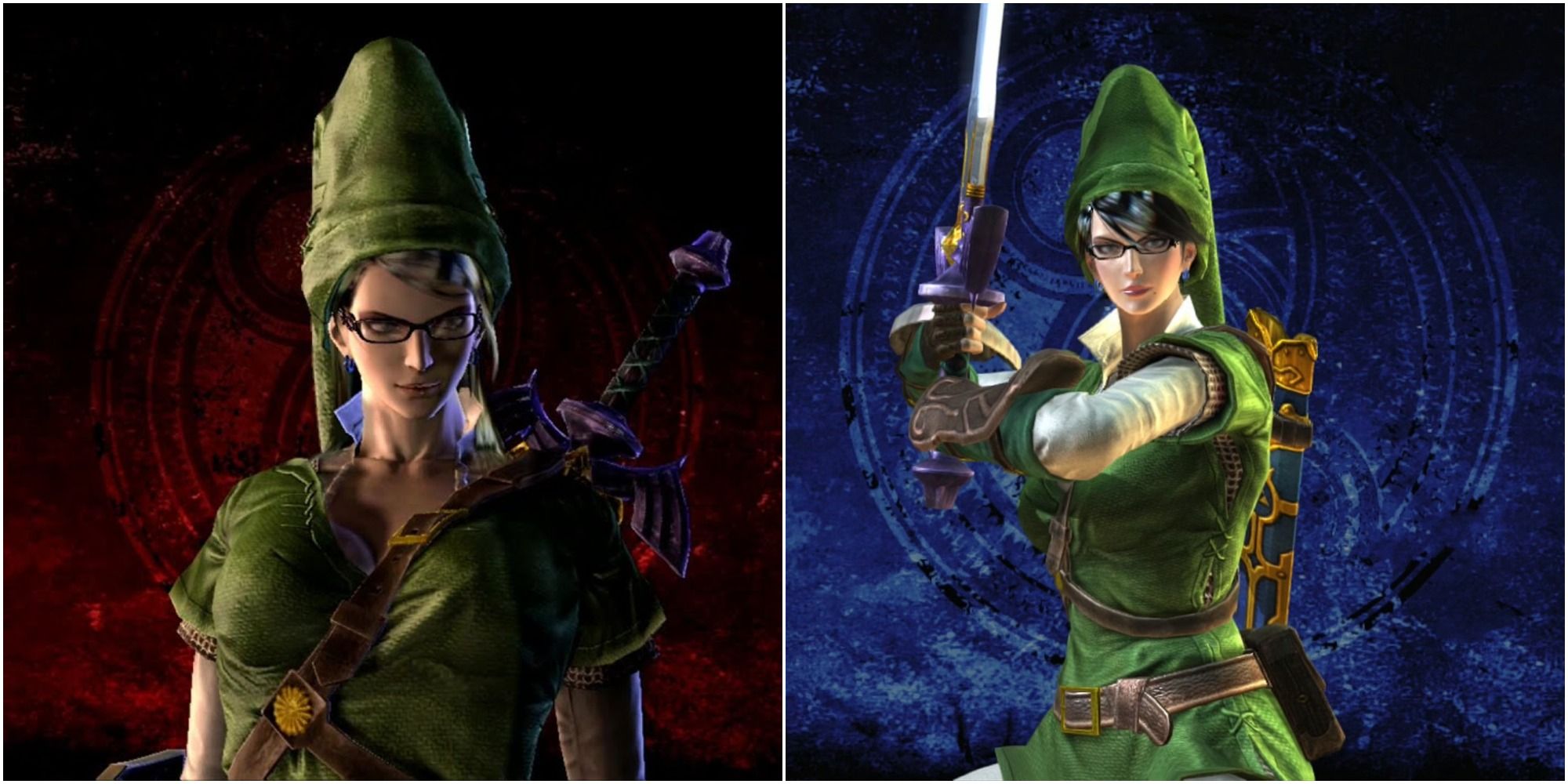 Across the Bayonetta series, the iconic Umbra Witch has worn a wide variety of clothing. Though Palutena might deem her a “wearer of questionable outfits,” most of them enhance the theatrical aspects of the games. Some of her outfits are Umbran Elegances, pieces designed to match a certain weapon she can use.

RELATED: Things We Wish We Know Before Starting Bayonetta Remastered

Others are Couture Bullets, costumes that might give Bayonetta a different occupation (such as a police officer or a nun). Five of her costumes are content specifically for the Wii U and Switch versions of the games, which are inspired by other fashionable characters from Nintendo’s history. All of her costumes come with a unique description that can be viewed in-game before purchasing.

A part of the exclusive Nintendo costumes available in the Wii U and Switch copies of Bayonetta 1 & 2, the Hero of Hyrule costume is inspired by Link, the protagonist of the Legend of Zelda series. The outfit appears to be mostly inspired by Link’s appearances in Twilight Princess and Skyward Sword, complete with his signature tunic, white pants, and Master Sword. Like the other Nintendo costumes, the Hero of Time outfit has additional effects when wearing it in-game.

If Bayonetta’s katana Shuraba is equipped, its design will change into the Master Sword, making enemies drop rupees instead of halos or orbs. Various environmental sounds, such as opening a chest, also change into music heard in A Link To The Past (which happens to be Hideki Kamiya’s favourite Zelda game). The Hero of Time outfit is unlocked by default in the original Bayonetta and can be purchased from the Super Mirror 64-2 in Bayonetta 2.

Only available in the first Bayonetta game, this designer jumpsuit presents a sophisticated and mature look for the Umbra Witch. This outfit is a dark version of Jeanne’s standard clothing, which is apparently a part of her beloved Italian fashion line “d’Arc.” The black colouring with the red seam compliments Bayonetta’s hairstyle perfectly in this game, which could be part of the reason it did not return for Bayonetta 2.

Once the Super Mirror is purchased from the Gates of Hell for 100,000 halos, this sleek outfit is available for an additional 100,000 halos. Wearing d’Arc does not change the effects of Bayonetta’s fighting style, but is fun to look at in cutscenes where Bayonetta is fighting Jeanne. Jeanne and d’Arc are an obvious reference to Jeanne d’Arc (Joan of Arc), the savior of France who was burned at the stake for heresy.

One of the more difficult outfits to unlock, this Umbran Elegance is only available in the first game once the Sai Fung weapon has been unlocked. Sai Fung becomes available once at least 100 chapters have been completed on normal difficulty. The weapon itself is a cheeky set of guns connected by a chain to look like nunchucks. As an Umbran Elegance, this outfit can only be worn when Sai Fung is equipped.

Giving her a more sporty look, this outfit retains the integrity and silhouette of Bayonetta’s usual design while incorporating a kung fu motif. Her baggy high-waisted pants show the witch’s midriff while rising above the belly, making this perhaps one of the most simultaneously practical and stylish outfits Bayonetta has ever worn. It can be bought from the Gates of Hell for 30,000 halos. While this outfit is worn, Bayonetta will shout “kiai!” at the end of a standard combo.

As the developers of Star Fox Zero, it is no surprise that PlatinumGames put attention to detail in Bayonetta’s Star Mercenary outfit. A fan-favorite from Bayonetta 2, the outfit gives Bayonetta a fashionable Star Fox-themed pilot suit. Incorporating Fox McCloud’s scarf, boots, and belt, this is the only Nintendo costume exclusive to Bayonetta 2. It is also the only outfit available by default after purchasing the Super Mirror 64-2 for 100,000 halos.

RELATED: The Best PlatinumGames Games, Ranked (According To Metacritic)

While wearing the outfit in-game, Bayonetta’s Love Is Blue guns turn into miniature Arwings which fire energy beams instead of bullets. Each gun is complete with a dangling plush of a different member of the Star Fox crew; Fox on the right hand, Falco on the left hand, Peppy on the right foot, and Slippy on the left foot. The usual sound they make when they fire is replaced by sound effects from Star Fox 64.

Perhaps one of the most fun outfits to wear in the game, the Nintendo princess costumes encapsulate the campy side of Bayonetta, and look absolutely outrageous when used in the games. Appearing in Peach & Daisy variants, the costumes are also available with Bayonetta 2’s short hair, though the tiaras appear better fitted on her original hair.

These costumes come with plushes of Mario and Luigi attached to the hip, and replace Madama Butterfly’s Wicked Weaves with Bowser’s limbs. Killing enemies in these outfits also makes them drop coins instead of halos, using the iconic coin sound effect from Super Mario Bros. Both Mushroom and Sarasaland variants are available in Bayonetta by default, and are available in Bayonetta 2 for 100,000 halos after purchasing the Super Mirror 64-2.

Another outfit exclusive to the original Bayonetta, this Queen outfit somehow turns Bayonetta into a more conventional-looking witch and also doesn’t at the same time. While she recieves a classic witch hat made of her hair, this new outfit also features ridiculously long lace boots which are a blast to kick enemies around in.

Though both dresses were canonically ruined by attacking angels, players are able to wear these elegant numbers after purchasing them for 100,000 halos at the Gates of Hell (once the Super Mirror 2 is bought). The white dress, Dress A, is especially fun to wear in the first chapter, as the cutscene will show Bayonetta transform back into it just after it gets torn up.

When designing Bayonetta’s default outfit for the second game, character designer Mari Shimazaki decided on the opposite colour palette from the first; blue and silver instead of red and gold. According to Shimazaki in a PlatinumGames blog post, the Bayonetta team decided that she wasn’t “the kind of girl who’d show up with the same hairstyle for her sequel.”

Given the name “The Famed Witch” by fans, this outfit is iconic for drastically changing Bayonetta’s look in a good way. All of Bayonetta’s jewelry seen in this outfit, including her earrings, compliment the environments she explores in Noatun during the game.

Though appearing to be the most conservative out of her three standard designs, the Bayonetta 3 outfit is also one of her most fashionable. While the exaggeration of her earrings has been toned back from the first two instalments, other features, like her glasses, have become larger. This outfit perfectly blends her red and blue pieces from the first two games by making her guns and jewelry purple.

RELATED: Everything We Learned From The Bayonetta 3 Trailer

Her braids and ribbon are a nod to Cereza in the original Bayonetta, whie her covered chest and emphasized shoulders are reminiscent of her look in Bayonetta 2. New elements such as the pink lipstick, hair skirt and hair bow breathe new life in the character, while the back cut-out remains a staple of her look.

A Witch With No Memories (Bayonetta)

It took Mari Shimazaki an entire year before landing on the perfect design for Bayonetta in the first game, but the payoff was completely worth it. Bayonetta’s design as a fashionable character is iconic throughout the gaming world, as gamers are able to identify the witch just through her silhoutte. Though it is simply known as the default outfit in Bayonetta, this costume’s name is A Witch With No Memories in Bayonetta 2.

While it is the norm in Bayonetta, wearing the outfit in Bayonetta 2 with its increased polygon count is extremely satisfying. From her beehive hairdo and cat earrings all the way down to her armed stilettos, A Witch With No Memories is an unforgettable look. It is available from the Gates of Hell for 100,000 halos after beating the game and purchasing the Super Mirror.

NEXT: Bayonetta: Greatest Quotes From Its Characters