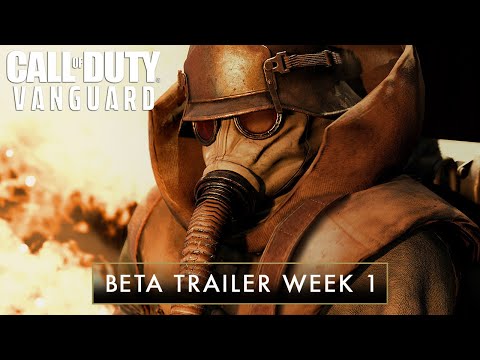 Call of Duty fans desperate to get their hands on this year’s entry will be going toe-to-toe this weekend for the Vanguard open beta. Having snuck in some early hands-on time with the latest COD, there’s a lot we’re excited about, making that final stretch before Vanguard’s November release date all the more agonising.

What Call of Duty players want to know is what’s changed and how different Vanguard feels in comparison to Black Ops Cold War and Modern Warfare. For those who glance over the series or only have a passing interest, there’s not a lot here that will stand out apart from its change of setting.

With Sledgehammer Games at the helm, they’re looking to follow-up 2017’s Call of Duty: WWII which means a completely new (well, old) array of guns and weaponry to play with. However, those who keep coming back to COD year after year will know just how unique each recent instalment has felt beyond the snappy shooting gameplay.

Let’s talk about the fundamentals first, though. If there’s one thing every Call of Duty game has to nail, it’s that tight yet punchy gunplay. Straightforward, fast weapon handling with each gun feeling powerful, even in the hands of rookie players. Solid, crunchy feedback underlined by immersive audio and that trademark crack of COD’s hit marker. We’re happy to report that Vanguard ticks all the boxes while sporting a few new mechanics seen in more recent Call of Duty games. For example, being able to reload while aiming down sights is standardised, as is the ability to use cover by mounting walls and other flat surfaces.

With only a limited spread of weapons, equipment, killstreaks, and perks to choose from, it’s hard to get grasp on what the Call of Duty: Vanguard meta will look like on day one. Sledgehammer have teased that there will be over 100,000 possible loadout configurations to choose from, which is somewhat of a double-edged sword. For those die-hards who love Modern Warfare, Cold War, and Warzone, that level of customisation is a must. With an increasing array of attachments and ammo types, loadout optimisation has become more of a focus in recent years. However, the increasing need to fiddle with these options and grind for weapon XP creates a layer of faff that shifts focus away from the bloody running and gunning.

Classic game modes are back in the mix, while Patrol immediately stands out as a new favourite. Similar to modes such as Headquarters and Hardpoint, two teams battle for a single control point. However, instead of disappearing then respawning each time the point is captured, it will continue to move on a constant circuit around the map.

Call of Duty: Vanguard also has something called Combat Pacing. This breaks down certain modes into three flavours that steadily ramp up the total player count from tense 6v6 skirmishes to the chaotic 40-player Blitz.

Then there’s Champion Hill. eight teams (either duos, trios, or quads) will face off as they each battle against one another in quick fire rounds, having a limited number of lives. These battles take place simultaneously on a map split into four smaller, isolated warzones. Think of it as Call of Duty meets Auto Chess.

Although everyone starts with the same basic loadout, the “buy round” between each match allows you to spend cash on various weapons and perks to take into your next fight. This will add a layer of strategy that has you guessing what loadouts enemy teams are packing, presenting an opportunity to counter them.

Let’s finish with the maps. Again, the Call of Duty: Vanguard beta doesn’t include everything we’ll see in the main game yet Hotel Royal, Gavutu, and Red Star show Sledgehammer flexing their level design muscles. Each one is deadly and diverse, whether battling across the rooftops and hallways of a hotel or stalking the ruins of a snow-covered city. There’s a real sense of atmosphere to these virtual battlegrounds yet some players may struggle with visibility due to the amount of polish and effects at play.

To tell the truth, the World War II Call of Duty games have always been my favourites. There’s a purity about them: that distilled boots on the ground action that supersedes some of the fluffier elements that Treyarch and Infinity Ward have have introduced over the years. Vanguard looks like it has found a comfortable middle ground, hopefully giving us a good idea of how Warzone Pacific plays when that arrives later this year, too.

Call of Duty: Vanguard will launch on November 5th for PS5, PS4, Xbox Series X|S, Xbox One, and PC. We are also reminding our readers of the ongoing allegations and multiple lawsuits against Activision.