Last year, Call of Duty: Cold War got off to a bit of a rough start, thanks in large part to development teams adjusting to the pandemic. It just felt a bit incomplete and a tad rushed. Yet, after some updates and patches, Cold War quickly gained momentum and ended up being an experience I played all year long.

This time around, Sledgehammer Games is driving the bus without Glen Schofield and Michael Condrey, the co-founders, and former studio heads. Their departure raised some concern as they have been the face of Sledgehammer for so many years. Yet despite the loss and the weight of the neverending pandemic, the development teams have effectively adapted as Vanguard feels like a complete Call of Duty experience. That isn’t something I could say last year.

Sure, it remains a Call of Duty experience through and through. Anybody who has ever spent any time with the franchise will feel right at home. Those snap controls at 60 fps are back and just like every other Call of Duty before Vanguard, it’s incredibly easy to pick up but equally difficult to master.

It’s a massive heap of content that includes a visually stunning single-player roller coaster ride, a fresh zombies experience with new wrinkles added to the mix and a deep multiplayer offering that’ll keep players grinding on those seasonal battle passes all year long. You get a ton of content out of the box and more content is on the way shortly when the Season One battle pass drops.

Ease Up on The Nades, Bro

It’s excellent value for the buck, but Vanguard doesn’t exactly reinvent the wheel. In many ways, Activision is playing it safe with its billion-dollar franchise and this is evidenced by its multiplayer (MP) mode. Picking up with Vanguard’s World War 2 theme, the multiplayer does feel very similar to Call of Duty: WW2 boots on the ground playstyle. It feels very ‘meaty’ and grounded. Player movement is not as fast as it is in Cold War. Reloading your weapons feels very deliberate, and slow. Yet the focus is all about getting the player into combat as fast as possible. While this is great for racking up high kills counts, I also died, a lot…

The maps themselves do look fantastic. The level of detail and design that went into each level is impressive. There is a level of verticality present in many maps which adds a layer of strategy. Not to mention the maps include destructible elements. You can blast out walls, doors, and other wooden areas which creates new paths and sightlines. I found myself constantly having to tactfully adjust on the fly. All 16 core 6v6 maps and 4 Champion Hill maps include destructible elements making the maps feel like a new experience every time you jump in.

Champion Hill is the most ambitious new mode, which acts as an extension to Gunfight. It features a series of tournament-style head-to-head matches. You can play solo (1v1) or squad up in duos (2v2) and trios (3v3). The combat takes place in an arena consisting of four maps to be the last squad standing. The matches are intense, short, and incredibly satisfying when your team comes out on top. Will it stick and become a franchise mainstay? Time will tell, but it’s certainly trending in the right direction.

Patrol is a new addition to those core COD MP modes and it is brimming with potential. Think of it as hardpoint but the zone is always moving. Staying alive is difficult as your team tries to keep moving while being blasted from every direction. It gets to be a bit much with everyone spamming the zone with grenades. Did I enjoy it? As a nice change of pace, yes, but I am not convinced it will become a COD staple like Domination or Kill Confirmed. Nevertheless, hats off to the development team for attempting to introduce a new mode into the mix.

It’s no surprise that small maps like Shipment and Nuke Town are a massive hit with fans. Blitz mode aims to wet the appetite of those maniacs who love to rack high kill counts and die over and over again. Blitz mode is exactly as it sounds. An all-out battle that can be 6v6 or 24v24 where the maps are smaller and the kills counts are high. It’s intense and will be a great way to level up your XP and that battle passes in no time flat. Post-launch, folks can expect Shipment sometime around mid-November and be able to play 24 maps by the end of the year.

Zombies mode is back and feels a little more inclusive this time around. I typically don’t spend a ton of time playing zombies, but I also understand it has a massive fanbase that soaks hundreds of hours into it. This zombie mode should appease both new and existing fans. And yes, once again your progression carries over from MP to Zombies mode, which is fantastic.

After you select your ability and load out, zombies puts you in a Stalingrad map where you are given a series of objectives involving traveling through deadly portals. These portals (which are significantly faster than Outbreak’s long-ass portals) drop you into other locations where you’ll complete various objectives. The idea being you complete these objectives and portal back into Stalingrad where you can snag every upgrade available.

I loved every minute of it, and I am not even a zombies guy. I liked the different objectives as it felt like I had a purpose, where in previous years it’s all about mowing down hordes of the undead and just surviving. It’s easily one of the best zombie experiences I have played to date and it remains as punishing as ever. If you’ve enjoyed the previous Call of Duty zombies games, there is no question you’ll enjoy what is offered here.

The single-player campaign is exactly what I expected but it sure is pretty. That said, the campaign features interesting characters, tons of action and some gruesome moments. Visually; however, it looks amazing. Everything from the cinematic photorealistic cut scenes to the detail on the facial animations, Vanguard’s single-player campaign is a technical showpiece of the PS5.

The story itself is decent as you experience various WWII battles through the untold stories of multinational heroes that formed Task Force One. The main characters all have their own backstory and unique skills. It’s a mostly predictable affair but you cannot help but root for the cast of interesting characters. There are many surprises that I won’t give away but the single-player campaign does provide the player with a nice little break from competitive MP action and you can bang it out in a rainy afternoon. 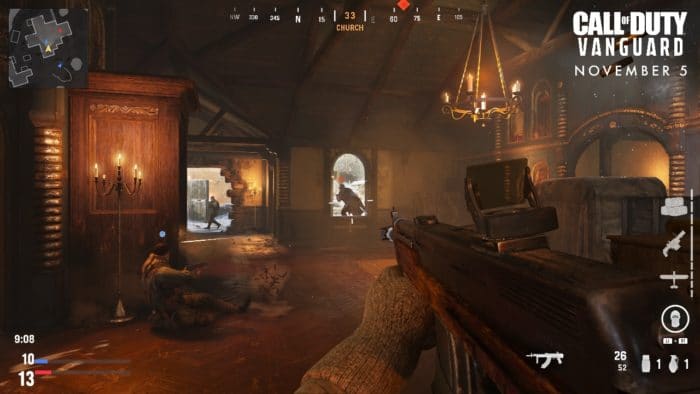 Vanguard doesn’t stray too far away from the classic Call of Duty formula we have come to expect from the franchise over the past several years. In many ways, it’s a little more of the same. That said, Call of Duty: Vanguard is an incredibly robust package offering up tons of content for the buck. Zombies mode is far more enjoyable and varied, the single-player campaign is a visual stunner, and 20 MP maps at launch is nothing to sneeze at. If you have passed over Call of Duty over the last several years, it might be time to come back.

***PS5 code was provided by the publisher***