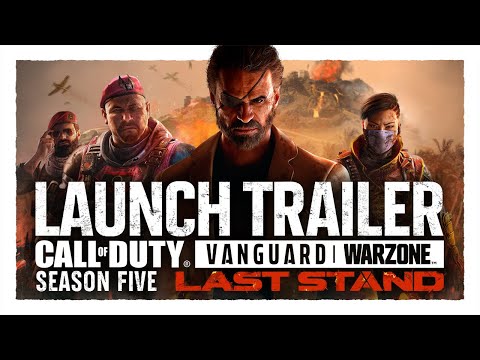 One of the craziest things that the launch trailer for the fifth season of Call of Duty: Warzone and Vanguard shows off is the return of Black Ops villain Raul Menendez. Though, ‘return’ might not be the right word. Considering the setting of Call of Duty: Vanguard, this season might be giving the narrative a bit of time jump to at least the Vietnam era, which is where the first Call of Duty: Black Ops took place.

If you’re looking for some explosions and gunfights, check out the new season’s launch trailer below.

Season five is fittingly given the title “Last Stand”, as it will be the last season Call of Duty: Vanguard and Warzone will have. With both Call of Duty: Warzone 2 and Modern Warfare 2 set to release later this year, both titles will cease getting content updates once this fifth season is finished.

The new map Beheaded is shown off in the trailer, featuring a recreation of New York City’s Times Square with the head of the Statue of Liberty in it. It’s a really striking visual that perfectly sells the feeling the new season is trying to portray.

Season five is set to release Wednesday, Aug 24 for all players of either title. Considering this is set to be the end, it’s best to get everything out of it you can.

As for the future of the franchise, a Sept. 15 livestream will take place called Call of Duty: Next.