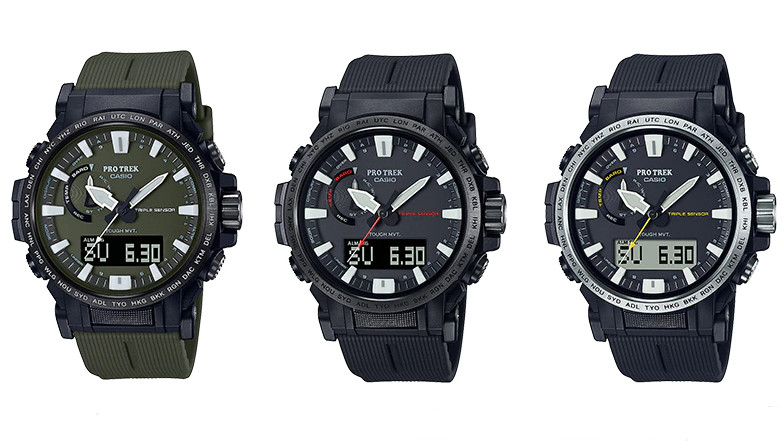 Casio has launched a new sports watch, the PRW-61, made using bio-plastic derived from castor beans and corn. Rather than conventional oil-based plastic, the case, back and strap are all made from more sustainably sourced materials. It’ll also be packaged in recycled paper rather than plastic.

In all other respects, it’s a typical rugged Casio digital watch, with a digital compass, barometer/altimeter, and thermometer for exploring outdoors. It also has multi-band radio wave reception from six transmission stations around the world to ensure accurate timekeeping, and is powered by a solar cell.

Some of Casio’s recent outdoor-themed watches have been pretty brash. For example, the Casio G-Shock MTGB1000VL-4A launched in 2020 featured an ion-plated rainbow bezel inspired by volcanic lightning, and a red translucent band reminiscent of lava. The PRW-61, by contrast, is much more understated.

The watch comes in three colorways: khaki with a black bezel, black with a silver bezel, and entirely black.

Bio-plastics are often used to make disposable items like cups and cutlery. These are commonly decorated with pictures of leaves and labelled as ‘biodegradable’, but that marketing can be misleading. Yes, in ideal conditions they might break down much faster than conventional plastics, but those cups and forks all to often end up mixed in with regular trash and sent to landfill, where the lack of oxygen means they’ll hang around for much, much longer.

It’s similar with plastics marked as ‘compostable’ – these won’t break down in the anaerobic conditions of a landfill site, and usually need to be processed in industrial composting facilities. Pop a compostable plate into your home compost pile today, and it’ll likely still be there in 2024. A reusable plate that you can simply wash would be much better, and will still be good as new.

Using bio-plastic for more durable items like watches makes a lot more sense; these aren’t intended to be replaced for many years, so we may as well use plant-based materials rather than oil.

Of course, the amount of plastic used in a watch is small (the Casio PRW-61 likely weighs approximately 53g including the band), but it’s a positive step if you were intending to invest in a new watch anyway – and provided the corn and castor beans were sustainably grown.