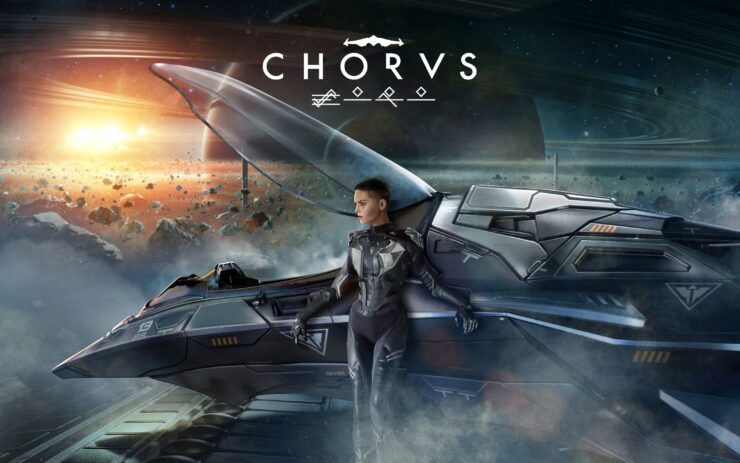 Chorus is a game that caught my attention, and when the announcement dropped last year, it instantly became a game to look forward to. I had no idea what to expect; it just looked out there. I could tell it was a fast-paced space shooty thing, but I also thought I would have a bit of space-horror thanks to the on-foot parts shown. I was right about the space shooting. The space-horrors do exist, but it’s not horror. I wasn’t right about anything happening on foot.

I never figured out why Fishlabs, or Deep Silver, don’t know how to spell Chorus. The “v” key is nowhere near the “u” – on a qwerty keyboard, that is – so It still baffles me why it’s written as Chorvs. Anyway, that’s not the point. So, from looking forward to it to getting hands-on with Chrous, what do I think?

I’m going to have to start with a few petty niggles first. One area you go to is just large lumps of ice, with a few rocks. One should remember that you’re in space, so the part that I noticed is that even when you’ve come to a complete halt, it’s snowing. If a sizeable destructive event had just occurred, sending ice crystals flying, I could accept that to a point. We know that hasn’t happened, so it shouldn’t be snowing. Also, why is it windy? I don’t believe space sounds like the UK during Storm Arwen.

Another issue, not quite as petty, is that all of your allies must be fighting with space-aged peashooters because I am pretty confident – even in the massive space war before the end-boss of Chrous – they don’t do any damage to the enemy. It’s likely by design because you don’t want the AI to finish your objectives before you get the chance? You may think so, but you would be wrong.

At first, this may seem like a crazy notion. Why, in a game that is all about space combat – and features genuinely exciting and compelling space combat – would you want the computer to take care of some of this space combat? The reason for that is simple: saturation. Despite the relatively large number of missions, the game has only three chords to play. See what I did there? That was more entertaining than half of this 15-or-so hour game.

Combat is fast, fluid, and fun. More than that, the sense of scale offered by some of the ships you fight provides a true feeling of being this super-powered being, which is what Nara is. The story revolves around Nara, her abandonment of a religious force attempting to conquer this area of space and bring all of its people “into chorus” after she killed billions at the behest of the religion. Only that force, The Circle, has found the last remnants of people who have fled and are on the attack.

These events bring Nara back into a war she was trying to hide from, and now she wants to overthrow the religion. Only she isn’t. But she is. To do this, she has to go through religious trials as she was born with abilities and able to learn space magic. Also, she flips back to speaking in the same lines as the religion with nary a push in that direction. In a roundabout way, what I’m saying is that the story of Chorus isn’t the most directed. It feels truncated, with a lot of the more minor points lost in the chaos.

Other issues include characters appearing without any development or introduction; Chrous expects us to know them or have some investment due to their rank or position in this fictional universe. Other characters, Chorus wants us to get invested in their trials and tribulations, even deaths, but it’s just impossible to care due to a lack of development. The sad reality is that Nara and her ship, Forsa (short for Forsaken), are the only things with any arc.

It’s this lack of development that further hinders the rest of the game. Several missions will have you using an ability to track and watch memories of past events, almost always leading to fights. Since this lacks virtually any emotional investment, the fighting then feels like it’s happening for the sake of it. Nearly all of them feel like the randomly generated missions with a bit of writing thrown in.

It’s a shame because you can see there’s an idea of a universe full of lore and interesting characters somewhere in here. It feels like Fishlabs cut something in the process, which is also an impression I sometimes get from the gameplay. I’ve mentioned the random missions that pop up. These seem to consistently reward you with credits to spend at a station in each area you visit. You can buy hull upgrades, shield upgrades, weapons and a few other random upgrades that allow you to customise your ship, some offering set bonuses.

These little things are a positive and further help propel the combat, the best part of the game. My preference is the set bonus that lets you absorb the shields from nearby enemies as it suits my style of getting as close to my victims as possible, using the drift and other abilities to get as much fun out of the action as I can. Being close to the action allows you to experience the game’s finer details, with a clear amount of effort gone into the ships and areas within Chorus.

That little segway brings me to one of the few other clear pros of Chorus, the aesthetics. Not only does the game honestly look good while playing it, but it’s also one of the few games where a photo mode has got an extensive amount of use from me. Even though the game feels a little lacking when you’re flying around, the visuals are fantastic, with excellent audio design to boot.

Well, mostly. The music is fantastic. Back to a bit of a niggle, possibly a big one. While the music is good, and most of the voice acting is passable to decent, there’s one thing that grated on me. Whatever Nara is thinking gets whispered, so you can tell it’s a thought. It’s incredibly annoying, unnecessary, and one of the worst ways of representing thought in any medium that I’ve ever come across. Whispered thoughts after nearly every sentence is not the way to weave in exposition or character motivations.

I honestly think I’ve said enough to say if Chorus is the game for you. To trim it down, if you’re okay with some genuinely good space combat in a game that looks fantastic, but held down by underdeveloped characters, story, and most other things, then it’s worth playing this. I will admit that I’m disappointed, even though I’ve no real cause to be disappointed.

It’s on me that I let a game break through the stony carapace that surrounds my heart, allowing me to think something unique and overwhelmingly positive can occur within the games industry. Go into Chrous expecting a decent-enough space-combat Eurojank game, and you’re going to be fine, and, honestly, that’s more than okay.