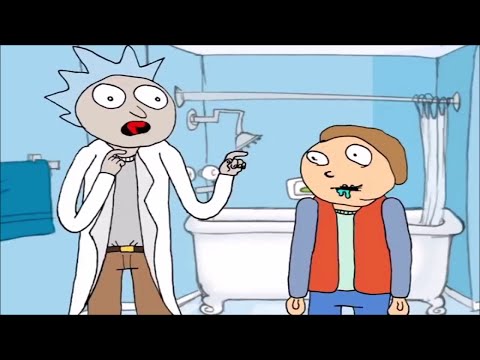 Back to the Future's Christopher Lloyd plays Rick Sanchez in a live-action Rick and Morty advert, proving that we're in some weird multiverse and that time is a flat circle.

The 30 second short debuted on Adult Swim's official Twitter page and seems to have been done to advertise the upcoming season finale for the show.

In the advert, we get to see a live-action recreation of Rick's garage, before seeing a green portal appear from the side. Out steps Rick, played by Christopher Lloyd, and Morty, played by IT's Jaeden Martell. Rick burps and says, "Morty, we're home" whilst Morty replies with a signature "awh geez" before the clip ends.

That means that with this advert, Christopher Lloyd is playing the live-action version of the animated character, who was inspired by an animated parody of a character played by Christopher Lloyd. See? Time really is a flat circle and none of it matters. Rick Sanchez would be proud.

Although some are hoping that this is some sort of tease for a live-action Rick and Morty, it's much more likely just a fun advert put together for the season finale. Weird Rick and Morty adverts are part of the show's DNA, with Rick constantly selling the audience products like Pringles, Death Stranding, and Wendy's.

Even though it likely won't go any further than this small advert, it's interesting to note just how positive of a response the internet has had to it, with many spotting that purposeful use of Christopher Lloyd. The clip already has 154.8k likes on Twitter and has gone viral incredibly quickly. Just goes to show the power of Rick, Morty, and making animated characters live-action.

Next: How Has Rick & Morty Fluffed Season Five's Landing This Badly?