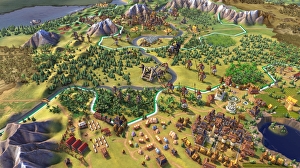 Firaxis has detailed Civilization 6's final free game update "of the season" ahead of its launch next Thursday, 22nd April, with new additions set to include three new units, two new True Start maps, plus a whole heap of balancing tweaks for older civilisations.

On the map front, players will be given the opportunity to sprawl their way across new Mediterranean and Huge True Start maps, and those will be accompanied by three new units for use by all civilisations: the Line Infantry, Man-At-Arms, and the Trebuchet.

Firaxis says it's re-examined and adjusted unit strength "across the board" in order to make its latest units feel like "appropriately weighty upgrades", and AI has also been tweaked to ensure civilisations make better use of naval units. This, it hopes, will "raise the stakes for travel on the high seas" and drive more interesting choices around naval production and warfare.