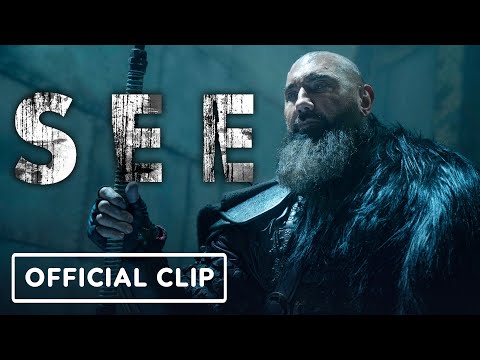 Apple TV series continues to tease its ongoing and recently released second season of its exclusive television series See, with its next episode releasing on September 10. See stars Jason Momoa as the main character, Baba Voss, a leader of a tribe that lives in a world where most of its population was wiped out.

The world in See is a place where most of the human population is wiped out leaving only about 2 million people left alive that have adapted to living without sight. Baba Voss marries Princess Maghra, a woman who comes to Voss's tribe looking for shelter. Voss was unable to have children of his own so he adopts the woman's children due to her being pregnant when they first meet.

The second season of See introduces antagonist Edo Voss, played by Dave Bautista. He will be of a rival clan and fans will get to see him as well as Jason Momoa clash on the small screen. Fans may notice something familiar about the name and for those that don't know, Edo is the brother of Momoa's character Baba. He stars in this clip where not much action is happening but it is an important dialogue scene where Edo and the Trivantian Republic discussing their ongoing war with the Kingdom of Paya.

While we don't see Edo and Baba together in this clip, See touches on the topic of family and protecting your own which creates drama that helps set itself apart from other post-apocalyptic shows. The show continues to introduce more characters, specifically children, with the ability of sight into the world established in one of Apple TV+'s premiere series.

Jason Momoa and Dave Bautista also co-star in the upcoming sci-fi film Dune which will be coming out and has been talked about for months. The two actors also discussed their pitch for an upcoming buddy cop action/drama that they both want to shoot in Hawaii so fans may get to see these two more in the future.

Hopefully viewers get to see the action they’ve been waiting for as more of season 2 of See releases. Many have been hyped of the impending battle between these two characters so fans will get to see if it’s worth the wait. All of the clips released so far have really been selling the show and the upcoming episodes which make people want to check it out as many see the concept as something unique.

MORE: First Reviews For Denis Villeneuve's Dune Are In: Here's What Critics Say