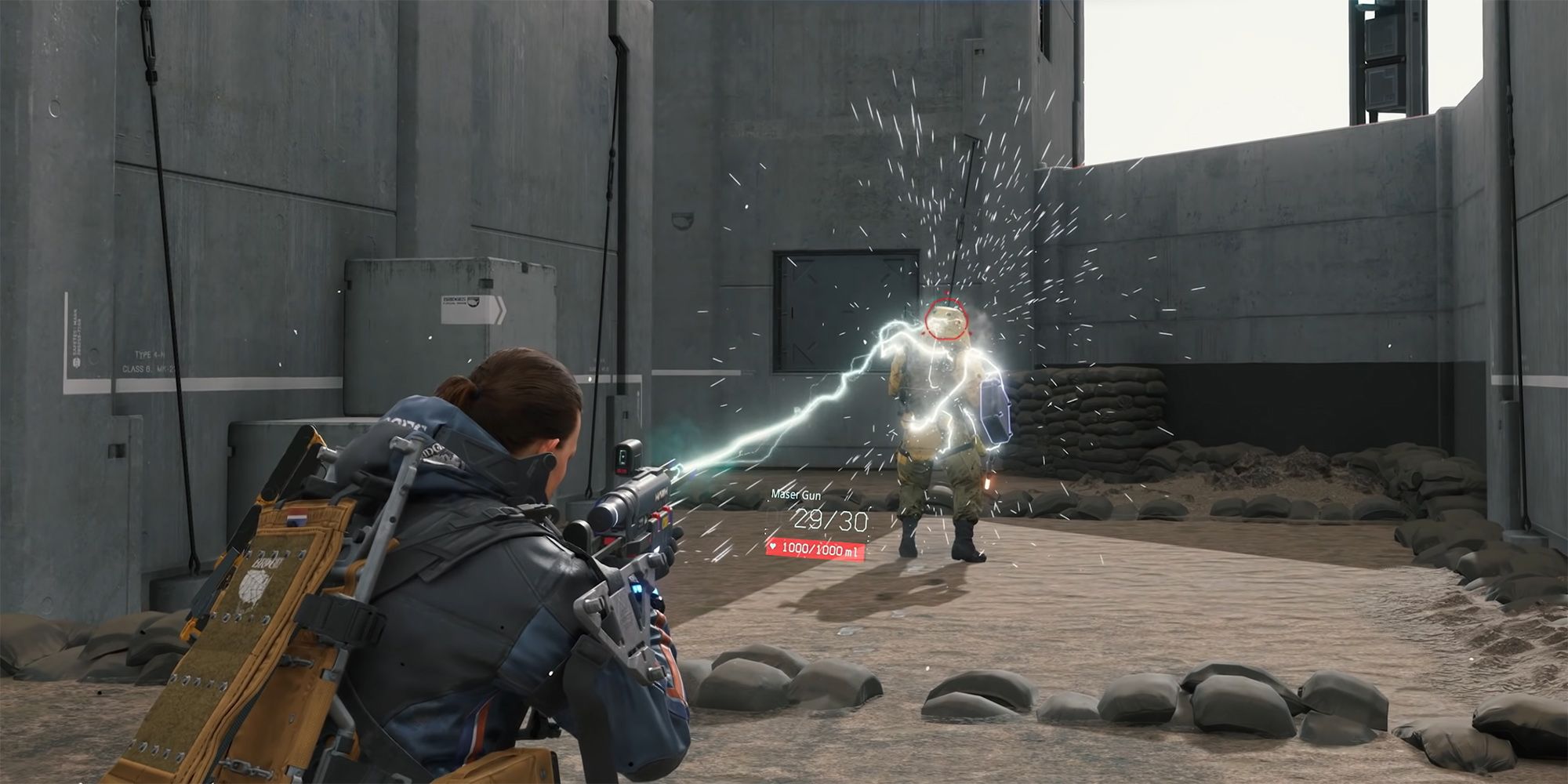 Games made by Hideo Kojima, such as the Metal Gear Solid franchise, typically tend to offer the player a veritable buffet of weapons/tools to use. It seems Kojima hopes that players will mess around with all of them, and find all the hidden gimmicks associated with each one.

Death Stranding, as well as Death Stranding: The Director’s Cut, is much the same in the sense that Sam has many different ways to approach combat (or even the avoidance of combat). But, just for today, let’s focus on the projectile weapons specifically. Here are a few reasons why each one listed below is more useful than players might think.

First up is the Maser Gun, added in the Director’s Cut along with a slew of new combat options. Players shouldn’t sleep on this weapon, as it’s a pretty useful backup to the Bola Gun, especially for new players since it takes quite a bit before the Bola Gun actually becomes unlockable.

That said, the Maser does require accurate shooting (thankfully the game has been on PC for a while now). The weapon takes a few seconds to neutralize a MULE, does nothing to BTs, and doesn’t have much range, so there are obviously drawbacks here.

The Sticky Gun is the ultimate convenience tool for wandering the oddly picturesque wasteland that is Death Stranding. Sure, it has almost no purpose as a “projectile weapon” to be used on enemies, but players can use it on items attached to enemies in order to take them down.

Whatever the Sticky Gun is locked onto will be pulled toward Sam, whether that’s a bit of coiled rope that some online player forgot to let down from a climbing anchor, or some lost cargo stuck in a rampaging stream. Not only that, this thing has use in combat as well. There are plenty of BT encounters and boss fights where Sam is trapped on a piece of terrain above tar, with tons of useful equipment sitting on a nearby piece of mostly-submerged terrain.

Bola Gun: The Closest Thing To The MGS Tranq Pistols

Compared to the Maser Gun, the Bola Gun is a lot goofier, but also probably twice as versatile. Sure, the MULEs hit with this are still conscious and tied up on the ground until Sam gives them a nice kicking. However, if he hits them in the head with a Bola, they’re out like a light.

RELATED: Former PlayStation Exclusives That Can Now Be Played On PC

More than that, the Bola Gun (especially the LVL 2 variant) is absurdly useful on BTs given that the fibers of the Bola have Sam’s blood woven into them. Plus, once a player unlocks the Cord-Cutter weapon, using it in combination with the Bola Gun basically nullifies any difficulty of BT encounters from that point on.

This next one is sort of the opposite of the Maser Gun. While the first weapon on this list is useful against humans but useless against BTs, the Anti-BT Handgun does nothing against living targets but is incredibly useful against BTs. Think of it as a paintball gun, but the paintballs are made of Sam’s blood. The longer a player charges their shot, the more blood it uses, and the more damage that blood paintball will do.

Quite frankly, this weapon is a vital part of Sam’s arsenal, even after he gets more BT-specific weapons. Its main drawback, though, is the fact that it needs Blood Bags in order to be used to the fullest. Sure, Sam can use his own blood to shoot it, but that draws from his health, so it’s pretty risky to do during one of the big boss fights against the larger BTs. It’s a shame there’s no variant of this gun that used Monster Energy instead of blood — but then again, Monster Energy Drinks aren’t even in the game anymore.

Where the Sticky Gun is the most helpful and versatile “tool” Sam has at his disposal, the Remote Detonation Grenade Launcher is the most versatile and helpful “gun” Sam has. This weapon is almost always carried by an experienced Death Stranding player, simply because it has four different ammo types that can all be used on the fly. These ammo types are:

As the name implies, all of these rounds are Remote Detonation and stick to whatever they’re shot at, meaning a player can use them like bullets, or they can use them like expertly placed traps, it’s completely up to them.

The SLW-X04 Quadruple Rocket Launcher: A Weapon Of Mass Blood-Struction

There is a standard Rocket Launcher in Death Stranding, but why use that when this one launches four rockets at once? That may sound like a bad idea, given how risky it is to use lethal force in Death Stranding, but this weapon is actually primarily used against BTs. That’s right, the Quadruple Rocket Launcher can be equipped with Hematic Rockets, each with 1000ml of blood in them.

During mini-boss encounters or especially against that gigantic BT holding Amelie hostage near the end-game, it’s a huge help. That said, the Quadruple Rocket Launcher is absurdly heavy, and it only fires 8-rockets total before being completely spent. And, unlike many other weapons, these rockets aren’t replenished upon visiting a Private Room. Instead, players have to fabricate an entirely new Rocket Launcher.

For the most part, Lethal Weapons in Death Stranding rarely feel worth it to use. Often, they actually feel more like a mistake than an intentional choice. Bringing bodies to the incinerator before they Void Out is a chore, and it’s easier to just hit them with a Bola Gun from afar and kick them into unconsciousness.

Plus, it’s not like Lethal Ammo does damage to BTs, right? Well, not necessarily. If a player hits a BT with a Hematic Grenade, then shoots their lethal-type weapon through that cloud of blood mist, bullets will basically become Hematic Rounds. Using hematic-type weapons is typically the better option, but in the early to mid-game, there are way more lethal weapons than Anti-BT weapons. In that scenario, the Shotgun is a godsend. Being able to get right up in a miniboss BT’s face, hit it with a hematic grenade, then unload with the regular shotgun is incredibly empowering for the early game, where BTs feel invincible.

(HG-Custom) WM.556 Non-Lethal Assault Rifle: But Only The Golden One

Essentially, Non-Lethal Assault Rifles are used in the same way as the Shotgun, but with more range and with the option of being able to be used against MULEs to knock them out without killing them. But, the primary reason this weapon is on here is because of the HG Custom variant of the Assault Rifle, unlocked from getting Max Connection Rank with one Peter Englert (the pizza delivery “guy”).

The HG Custom variant is capable of firing gold rounds made from Chiralium instead of hematic ones, making it a ridiculously good weapon to use against BTs. Additionally, it now has a grenade launcher attachment that can fire both lethal and non-lethal grenade rounds, expanding its versatility. It’s a shame this isn’t unlocked until late into the game, but with that damage output, it makes sense.