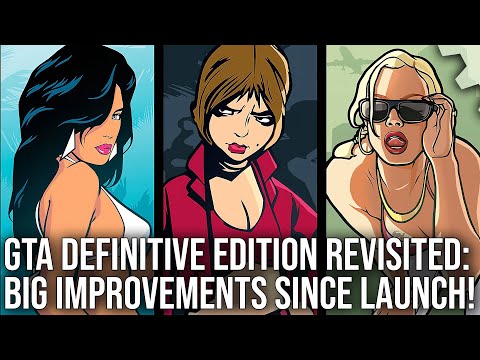 Three classic GTA games re-released late last year, in the form of GTA: The Trilogy – The Definitive Edition. While a modernisation effort was much appreciated, it’s safe to say the execution was less than ideal. Well, six months later it’s looking like these games are in a better state.

The folks over at Digital Foundry have taken another look at the trilogy, delivering a more up-to-date verdict on the three games. While fundamental issues like animations and general stylistic choices remain in place, a lot has been improved.

First up, as we can see, that awful launch rain effect has been changed dramatically, creating a much more natural effect overall. Basically, you can actually see now in the game’s darker scenes, and rain doesn’t ‘stick’ to the camera when flying in the air!

A bunch of the game’s weirdly scaled textures and writing have been fixed since launch too, with the analysis comparing version 1.02 to version 1.04. Sadly, this aspect is still inconsistent across the three games and certain quirks still remain, you know, like text being displayed back-to-front.

All in all, this new look at the game does show some nice improvements across the board, but we’re still generally a bit disappointed by the state of these releases. As the video shows, the original Xbox versions of these games look like the ‘definitive’ versions to us.

What do you make to the latest patch for the GTA Trilogy? Let us know down in the comments!