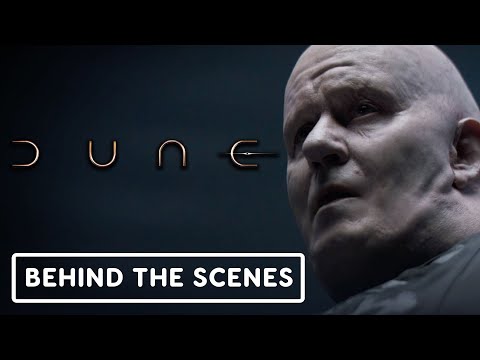 Nearing its theatrical release in the U.S., Denis Villeneuve’s Dune keeps the excitement rolling with another behind-the-scenes clip. This one reveals the costume and makeup designs for the film’s villains, the Harkonnens.

Dune‘s world premiere was held at the Venice International Film Festival in early September, where it opened up to rave reviews from critics. Since then, numerous clips and footage have been making their way online, revealing everything from the cast to the large-scale production of the highly anticipated epic. In this new Dune featurette, cast and crew members praise the design and overall look of the film’s main villains, the Harkonnens, who are lead by MCU stars Stellan Skarsgård, Dave Bautista, and David Dastmalchian.

The film, which is based on the award-winning 1965 science fiction novel Dune by Frank Herbert, follows heir Paul Atreides, a young man who accepts the stewardship of the dangerous desert planet Arrakis, which also contains the most valuable substance in the universe known as the “spice.” Taking control of Arrakis means great wealth and power, but it also means greater enemies. That’s where the Harkonnens, a ruthless family that rivals house Atreides, come in, and they will stop at nothing to gain control of the spice and the universe in its entirety.

Speaking about the design process, Skarsgård opens up about the amount of time that went into creating the look of his character and house Harkonnen as a whole. “I had long discussions with Denis about where I wanted to go with it and that (the Baron) looked different than he had, a presence that you hadn’t seen before,” Skarsgård says in the clip. “It was difficult because I didn’t want the Baron to look like a caricature. I wanted to feel the madness of that massive human being and that weight.” Donald Mowat, the film’s makeup & hair department head and prosthetic designer, worked with many colleagues in Sweden to create the fat suit that would give Baron Harkonnen’s grotesque, obese appearance.

Dastmalchian, who underwent heavy makeup prosthetics for his most recent role in The Suicide Squad, praised the look of his character, Piter De Vries. “The makeup lends so much to the character. The first time I looked in the mirror when the makeup artist completed the look for the day, I just saw Piter. It was amazing,” he said.

In an already blockbuster-filled October, with films like No Time to Die and Venom: Let There Be Carnage already making a splash at the global box office, Dune looks to build off of the success and give moviegoers plenty of reasons to make their way back to the big screen. Dune‘s cast also features rising star Timothée Chalamet as Paul Atreides, Oscar Isaac as Leto Atreides, Zendaya as Chani, Josh Brolin as Gurney Halleck, Jason Momoa as Duncan Idaho, Rebecca Ferguson as Lady Jessica, Stephen McKinley Henderson Thufir Hawat, and Javier Bardem as Stilgar.

Dune is set to release in theatres and for streaming on HBO Max on October 22, 2021.