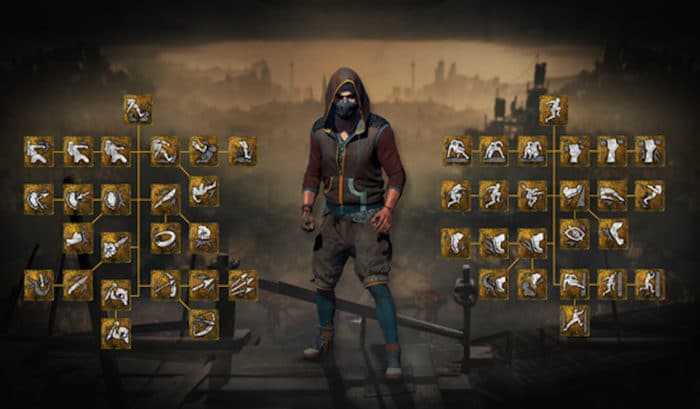 As we rapidly approach Dying Light 2 Stay Human’s February release, Techland is releasing more information about the game. The much-anticipated sequel will feature a new approach to character progression. Notably, this was revealed in the parkour and combat skills added to the game.

Both are showcased in the below video that highlights the new Combat skill tree, ranging from Block Charge skill to the Ground Pound skill. There is also the Parkour skill tree that covers the Far Jump skill, the Tic Tac wall-running skill, and everything in between. This skill tree opens up so many combination possibilities.

Players will be able to advance within these skill trees using experience points they earn by performing specific actions. Each player will have both parkour and combat experience bars.

Movement-based actions such as climbing, jumping or vaulting will reward players with parkour experience points. If players perform more complex movements, they will receive more experience points. For example, players can combine the Dart skill that increases running speed with the Double Jump skill. This combo can unlock new places players would otherwise be unable to reach.

As for combat experience, Dying Light 2 Stay Human will reward players when they fight their enemies. As with parkour skills, more complex fighting moves (like combo attacks) result in larger reward points. For example, the Grapple skill will allow players to throw enemies, and it can be combined with the Stomp skill that allows players to head stomp enemies on the ground. This will kill them instantly.

Since complex moves will result in greater experience point rewards, players will want to upgrade their skills frequently. This will give them the ability to perform increasingly complex moves. In addition to performing moves, players can fill their experience bars faster by completing quests.

Dying Light 2 Stay Human will debut on PC, PlayStation 4, PlayStation 5, Xbox One, Xbox Series X|S and Nintendo Switch on February 4. Which side of the skill tree will you invest more of your time in?