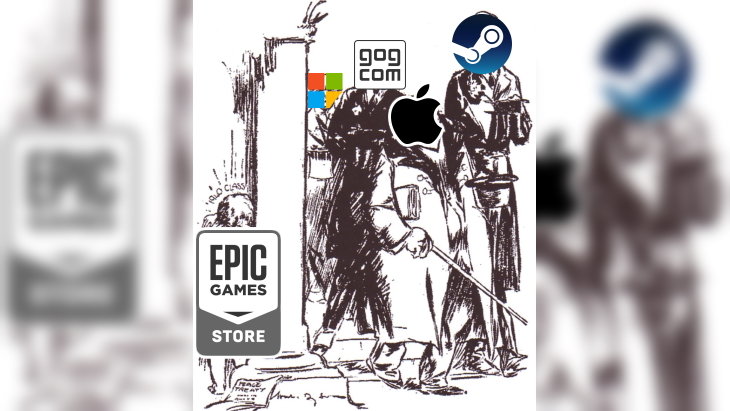 The ongoing Apple vs. Epic Games lawsuit has seen the latter claiming the Epic Games Store will not be profitable until 2023.

The news via a new court filing of Epic Games Proposed Findings of Fact and Conclusions of Law. The 365 page document features numerous claims arguing in favor of Epic Games; stating that they should have been allowed to feature their own payment processing thought Fortnite on the App Store.

However, Epic Games’ lawyers have made some claims that some may consider surprising if they were intended to support their case, or show themselves in a favorable light. Starting on page 139 of the .pdf (numbered page 133 of the document itself), Epic Games discusses their financial arrangement with third-party developers on the Epic Games Store.

They proudly boast that “Epic does not require any developer to use its payment processing system,called Epic direct payment, for in-app purchases,” and do not have to pay them anything if they wish to do so. They also discuss how they charge developers 12% revenue share, and how developers creating games in Unreal Engine may distribute them through other platforms (while Epic waves licencing fees for games on the Epic Games Store).

“To create a positive user experience on EGS [Epic Games Store],” the filing argues on page 140 (141 of document), “Epic has invested substantial resources into acquiring distribution rights for popular games, as well as developing new store features.” They also discuss bringing new features to the Store, along with their regular weekly free game giveaways.

Sweeney’s statements had further added to the filing, explaining that this was because the Epic Games Store had “front-loaded its marketing and user-acquisition costs to gain market share.” It also added “EGS’s 12% transaction fee is sufficient to cover the variable costs of running EGS, including payment processing, customer service and bandwidth.”

Some have reported that Epic Games had lost almost $181 million USD and $273 million USD in 2019 and 2020; citing the court filing. However, our own research into the filing has not found supported this claim.

IGN reports that in the Epic Games Store end of year report, players had spent $700 million USD on the store in 2020. However, third-part games only made $265 million of that. It also notes that the $444 million USD for the advances had not yet been earned back.

Sweeney was quick to defend Epic Games on Twitter, saying “it has proven to be a fantastic success in reaching gamers with great games and a fantastic investment into growing the business!” He further highlighted the Stores over 160 million customers, over 56 million active users in December, giving away over $2,400 USD in free games (across 103 games), and more.

Both also cite Apple’s own Proposed Findings of Fact and Conclusions of Law, reportedly claiming that their own prediction that the Epic Games Store would not be profitable until 2027.

It is hard to imagine that Sony Corporation would not find the news concerning, as they recently invested another $200 million into Epic Games; for a total of $1 billion USD.

As we previously reported, Epic Games announced that the price of V-Bucks, Fornite‘s in-game currency that can be bought with real money, would permanently be 20% cheaper on all platforms. However, on Android and iOS, a new payment method was introduced.

Rather than buying the V-Bucks through Google Play and the App Store respectively, Epic Games launched the “Epic direct payment.” “When you choose to use Epic direct payments,” the announcement explains, “you save up to 20% as Epic passes along payment processing savings to you.”

This is due to Apple and Google collecting a 30% fee through all V-Bucks bought on their respective platforms. As such, the 20% drop has not been applied to purchases made through them. Epic Games state that “If Apple or Google lower their fees on payments in the future, Epic will pass along the savings to you.”

Shortly after this announcement, Apple and Google both removed Fortnite from the App Store and Google Play Stores respectively due to Epic Games violating their terms of service.

Epic Games issued legal action against both, citing that they had a monopoly over their stores on iOS and Android. Apple had allegedly threatened to terminate all of Epic Games’ App Store developer accounts and cut off tools for development on iOS and Mac.

Epic Games may have been expecting action from Apple however, having made a parody of Apple’s own 1984 commercial; appealing to their fans to support them. Further, the #FreeFortnite Cup was announced.

Apple later accused Sweeney of asking for exception from the App Store terms and conditions. Sweeney tweeted that Apple’s statement was misleading, and presented screenshots of the alleged emails. Microsoft also filed a statement of support, favoring Epic Games.

In late August, Apple terminated Epic Games’ App Store developer account. This means Epic Games will no longer be able to submit new apps, or updates to existing ones (such as the Infinity Blade games).

Epic would successfully win a restraining order that month, denying Apple removing Unreal Engine-based games from the App Store (thereby harming developers who used the engine for their games). Epic Games later filed an injunction asking that Apple be prohibited from “taking any adverse action against Epic.”

In early September of this year, Apple issued a counter-suit against Epic Games. Therein they asked for compensation and damages, claiming Epic Games’ actions were “little more than theft.” Both parties would later agree to a trial by judge, rather than a jury. That trial is set for May 3rd, 2021.

Judge Yvonne Gonzales Rogers gave a preliminary injunction in October. Apple did not have to reinstate Fortnite on the App store, but they had a restraining order preventing them from revoking developer tools from “Epic Affiliates;” such as those using the Unreal Engine for their game.

Judge Gonzales Rogers later dismissed two of Apple’s claims at a hearing on November 10th, including their claim of Epic Games committing theft. She told Apple lawyer Anna Casey “You can’t just say it’s independently wrongful. You actually have to have facts.”

Sweeney recently drew ire for comparing the Epic Games vs. Apple lawsuit to the civil rights movement. Epic Games also reportedly hired a lobbyist to propose a bill in North Dakota, that would allow alternate payment methods on the App Store and Google Play.

Apple had previously asked Valve for six years of their sale’s data, any discounts, and when they became available on Steam. They claim this information was crucial for calculating the size of the mobile gaming market. Valve rejected this request, as they did not keep such records, and 99% of the over 30,000 games on Steam from third parties (including confidential data).

Despite the already extensive manhours (and Valve stating they did not compete in the mobile gaming space) Apple reduced their request to 436 games- those available on both Steam and the Epic Games Store. This data would still have included (from 2015) all sales, price changes, gross revenues, and all revenue related to every version of those games and all digital content or items.

Valve rejected this as well, stating Apple had failed to produce evidence they needed it for their case. Nonetheless, Valve were ordered to surrender four years of sales data from the 436 games (rather than six years) for the case.