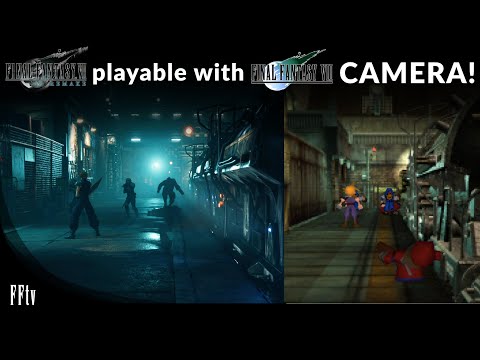 With the release of Final Fantasy 7 Remake on PC, one thing was certain. Within days there would be a deluge of mods for the acclaimed roleplaying game: some benign, some ludicrous, and others looking to improve its visuals and performance.

One particularly nostalgic mod concept for Final Fantasy 7 Remake comes via Final FanTV. In a six minute video uploaded to YouTube, they show what Square’s long awaited remake could have looked like if the developers decided to keep those classic, PS1 fixed camera angles.

In this concept video we see Cloud, Barret, and the other members of Avalanche on their way to the Mako Reactor during the first chapter of the game. The concept creator shows us environments from Final Fantasy 7 and the remake side by side in a way we’ve never seen before. We even get to see combat sequences recreated in that classic PS1, turn-based style.

In our original review of Final Fantasy 7 Remake on PS4, we scored the game a triumphant 10/10:

In 2021, the RPG launched on PS5 with improved graphics and performance features alongside the Intergrade DLC which Nic reviewed:

You should absolutely get Final Fantasy VII Remake Intergrade. It’s easy to be critical and nitpick, but it’s worth remembering we’re looking at the DLC for one of the best and most-loved games of the PS4. The PS5 upgrade for Intergrade looks and feels incredible, and the chance to play as Yuffie is warmly received, especially when she completely changes the tone to something more light-hearted. However, the DLC isn’t quite perfect and, despite the filler, it feels very short for its price, especially if you’re not interested in the side missions.

Square Enix has yet unveil the second part in the FF7R series. With much of the groundwork having already been established, hopefully we’re due to get our first look by the end of 2022. However, it’s likely the publisher won’t want to draw attention away from the next mainline game in the series, Final Fantasy XVI.