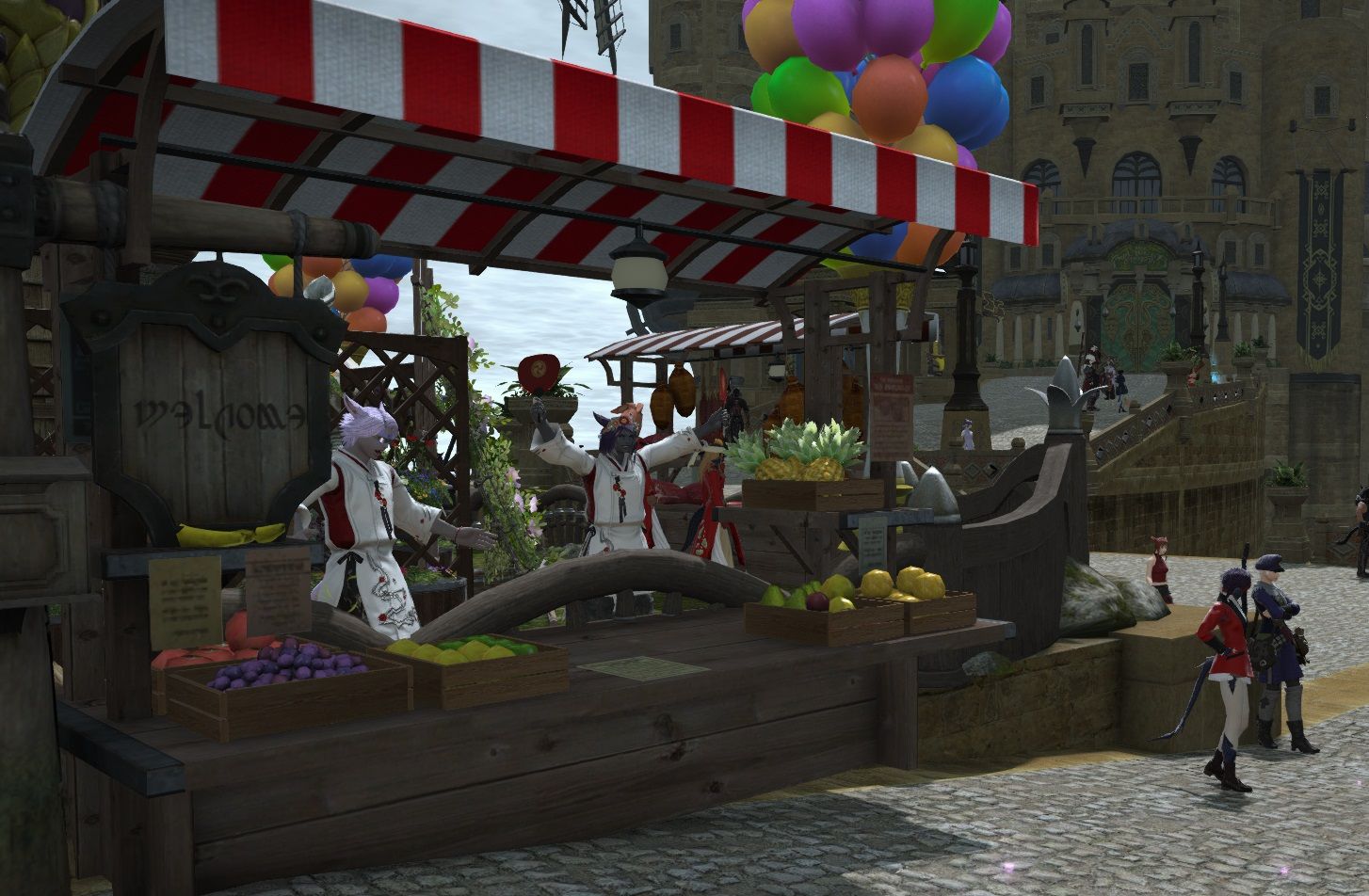 Community spirit can be hard to define, but if there’s one thing I’ve learned from playing Final Fantasy 14, it’s that this game has it in spades. I recently attended the A Feast Reborn food festival on Mateus Server in the Crystal Data Center – an event that aimed for new heights of player engagement by encompassing a whole block in The Goblet housing wards.

This food street fair featured various booths, bard performances, a DJ set, competitions, and more. Festivities stretched across multiple Free Company housing plots and spilled out onto the streets in between, where players crowded in clusters and enjoyed the delights of the festive evening.

Nyte Snow, the person behind A Feast Reborn, opened their Abbiocco Fine Dining roleplaying restaurant in October 2020 and decided to celebrate their first anniversary in style while taking inspiration from a real-world event in their local town.

“We opened our venue a year ago on October 20 and we wanted to do something really big and fun as an anniversary event,” Snow explains. “We wanted to give back to the community as well [those] who have made it possible for us to have a full venue every Monday for pretty much a year. At the same time, I really miss this cool street festival in my city – Rib Fest. The atmosphere is just so amazing, the crowds and everyone vibing to music and loving food. I wanted that, here.

“We want to give people a chance to socialize with each other, something we’ve lost in COVID-19. We want to give exposure to a lot of great food venues and the roleplayers who make them possible because they’ve done the same for us in the past year.”

A Feast Reborn was a roleplayer’s paradise, but it’s also a brilliant event to attend for casual players too. You don’t have to be a roleplayer to appreciate the hard work that went into this festival – simply watching the different personalities of the booth vendors as they bantered and bartered with the attendees was a joy to watch. A firm favorite of mine was Third Eye Sushi, as the two miqo’te players manning the booth were so expressive and attentive to the customers, while also making me chuckle with their funny antics.

Each booth had its own menu with an array of delicacies. Amongst Third Eye Sushi’s offerings was Dango – a Japanese dumpling dessert – which was one of the items featured in Lemon Drop’s pre-festival stream. This creator is well known within the FF14 community for re-creating in-game food in real life, and she held a special A Feast Reborn stream the day before the event where she cooked Dango just like in the coming festival.

Bringing together the likes of Lemon Drop and all of the amazing roleplay cafes for the festival’s food stalls was a large undertaking, but one that paid off and created a memorable experience for everyone involved.

“Everyone was eager to come aboard,” Snow tells me. “I had to come over and explain to them what the festival was, what we wanted, and people were enthused. We approached most of our vendors, pulling them off CrystalShouts.com or off the FFXIV roleplay calendar maintained by Erroch. Some said no, but most leapt at the chance. We’re so grateful.”

Preparing for A Feast Reborn required a mammoth amount of work from everyone involved. From recruiting various people to help out, finding funds, sponsors for the items and the raffle prizes, gathering and crafting ingredients, spreading the word, networking, and the brilliant artwork for the official website.

Snow also had to overhaul the outside of their FC house for the event, adding festive decorations and lining the walls with booths so that patrons could walk along the street and browse the different stalls. It took Snow a day or two to complete the setup, and then for the evening itself, she had thirteen dedicated people on her team, and that’s not including the various vendors, performers, or photographers.

“I can’t praise Altan Tsennoh and Bizan Sorac’s players enough – they’ve gathered, crafted, chit chatted, networked, and more to create an amazing raffle package,” Snow says. “Oh, and the amazing artist, Aurora Arts, who did the chibi heads found on our website. All the artists, all the food vendors – without them I’d not be doing this.”

Throughout the evening, DJ KitKat was blasting out the tunes on their Twitch channel, offering an eclectic range of tracks that covered the likes of ‘90s one-hit wonders through to Disney tunes. I couldn’t help but bop along as I ran around enjoying myself and snapping screenshots of the festival.

Much like any real festival, the event wasn’t contained to just the booths and performances. Part of what makes any festival truly great are those small moments you have with friends, and it was clear from the crowds and little huddles of players enjoying themselves that there were some brilliant memories being created there.

For those who missed A Feast Reborn, Snow is considering making it an annual event if there is a demand for it. You can also visit her and her team at Abbiocco Fine Dining, which is open every Monday between 8 pm – 11 pm ET (apart from the first Monday of every month due to maintenance).

“It’s a fine dining restaurant with a high-class lounge on the main level and formal three-course dining upstairs,” Show explains. “You can expect attentive staff, menus that change monthly and are designed by a real-life culinary student, live music from bards on two stages – one on each level – and excellent RP.

“Here at Abbiocco, we consider ourselves RP-101 friendly. What that means is that so long as you’re respectful and not disturbing other roleplayers, you’re welcome. Whether it’s your first time or thousandth time roleplaying, we’re happy to be able to be part of your experience. We teach through example and I know all of us can think back to our first time roleplaying and just cringe. Some roleplayers exclude new roleplayers because they can be so excited and so happy that they can be cringey – but we want them to revel in the cringe and learn and grow, which they can’t do if we look down their noses.”

The restaurant will be open from now until the launch of Endwalker, where it will take a break until January while people clear through the new content. However, it will be opening for a couple of special Christmas events during that time.

“Around Christmas time we have a special day where people can get photos sitting on Santa’s knee,” She tells me. “We have a roegadyn or hrothgar dress up as Santa and use some well-placed stools/chairs. You sit on the stool and it looks like you’re on Santa’s knee.”

You can keep up to date with news about Abbiocco Fine Dining and their events via their website and Discord.

Next: This Week In Final Fantasy 14: TGS Talks And Bizarre Copycats