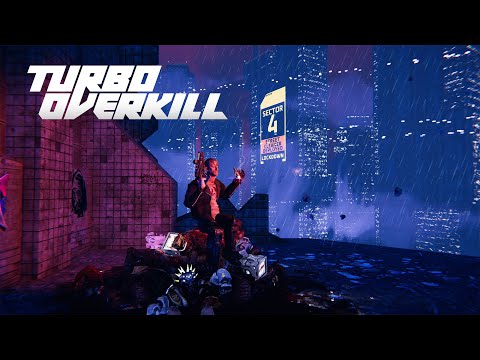 Trigger Happy Interactive is ready to launch its debut project alongside publisher Apogee Entertainment, a company that has been quite a few releases in the video game industry including Terminal Velocity, Crystal Caves and Secret Agent. The companies have announced that Turbo Overkill will launch on PlayStation 5, Xbox One, Xbox Series X/S, PlayStation 4 and PC via Steam, GOG and the Epic Games Store sometime in 2022.

The quote gives fans sufficient information into what Turbo Overkill is all about. Fans play as Johnny Turbo, an augmented half man half machine armed with arm rockets and a chainsaw. Johnny returns to his home and find that it has been captured by Syn, a rogue AI, and its army. Johnny takes it upon himself to fight against the AI army.

Players in Turbo Overkill can mix n’ match a ton of moves to keep combat fun including activating Hero Time, blasting away at your twin magnums and using your chainsaw leg. There are over two dozen stages with secrets to explore and guns, skills and abilities to unlock.

Scott Miller, founder of Trigger Happy Interactive, stated, “Turbo Overkill is a sandbox of fun and original gameplay ideas that come together like a night of melty hot pizza and your favorite cold, frothy brew. Playing this game made me a Turbo Lover all over again.”

What are your thoughts on Turbo Overkill? Are you interested in these types of games? Let us know in the comments below or on Twitter and Facebook.