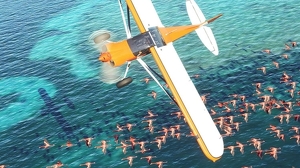 Following yesterday's release date reveal for Flight Simulator on Xbox Series X/S, Microsoft has shared a few additional details – including confirmation that it'll run at 30fps on console – via the time-honoured mediums of FAQ and Twitter.

Those frame rate details come via the official Microsoft Flight Simulator Twitter feed, which, in response to queries from a number of curious punters, confirmed that Xbox Series X/S players can expect a base frame rate of 30fps. It noted, however, that frame rates above 30fps are possible on TVs supporting variable refresh rates (VRR).

Over on the official Flight Simulator's FAQ, meanwhile, most additional details provided aim to clarify questions around how the console edition will interact with the version already released on PC, and confirm, for instance, that those who own the Windows Store version on PC won't need to purchase the console edition again.