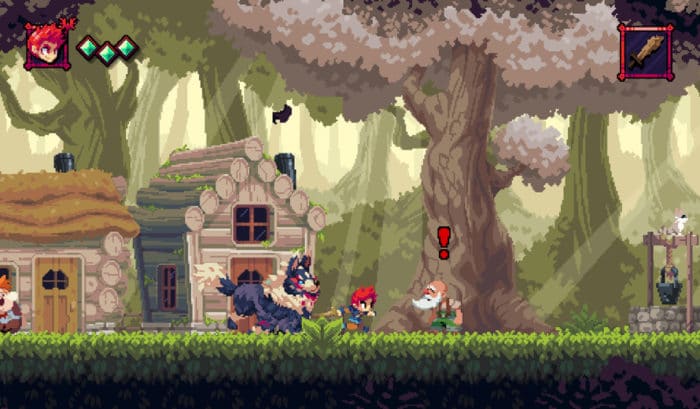 Flynn: Son of Crimson is that game you remember. It’s a 2D adventure that challenges your ability to jump, solve simple puzzles, and occasionally go toe-to-toe with a big boss fight. Playing as the red-haired boy Flynn, you set off on an adventure with your canine guardian Dex and eventually fall into all manner of hijinks and new powers.

It’s obvious from the get-go that this is a more modern game, chiefly in the amazing 2D pixel art on display. Animations from how characters move to trees painstakingly rendered in the background – all of it comes to life as you move through each level. I never tired of looking at everything in this game and soaking in all the little details, like how Flynn’s hair or Dex’s fur moves side to side in the wind.

Son of Crimson uses a traditional overworld and each level is a unique but mostly linear side-scrolling affair. While some things are closed off on your first pass through an area, a Metroidvania this game is not. And that’s okay! Because Flynn: Son of Crimson wants you to focus on the fun that comes from what happens next (even if it makes you backtrack sometimes). Each level presents new enemies to fight and new mechanics for you to deal with, whether it’s timed buttons or blocks, or barrels that explode, there’s a good variety to be had.

Most of the puzzles are very straightforward, tasking you with simple challenges like moving a block or two, or timing your ranged attacks to hit a switch. Later on, there were a couple of surprises in terms of using Flynn’s move set like rolling to make a difficult jump, but for the most part I was never stumped or ever had to think hard for more than a few seconds.

Enemies in Son of Crimson have straightforward attack patterns, though some are harder to read than others. Most are often easily dispatched with a few swings of your sword, or some ranged magic attacks. There’s also a stagger meter of sorts, where fast and consecutive hits can stun your opponent, giving you an opening to absolutely thrash them. Deeper in you unlock some new abilities later like a Crimson attack that lets you pretty much decimate any fool that gets in your way and an additional weapon with some other magic powers to exploit. 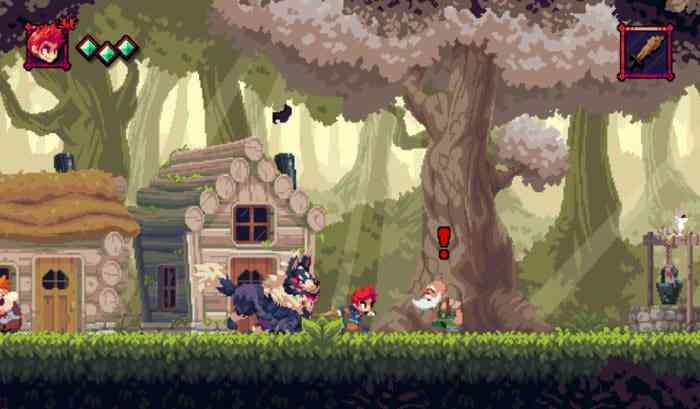 It all helps to keep the combat interesting as the simple story unfolds. While inoffensive, the story is mostly ignorable and straightforward. There’s a green colored villain that’s up to no good. They’ve sabotaged your dog buddy Dex, and it’s up to you to set things right. I mean, who would stand for anyone messing with their pup? From there you’ll explore new areas, get pointed toward a simple quest or two from a villager, and fight bosses that want to stop you (for reasons mostly never explained).

One of my main gripes with the game is at times it forces you to backtrack in order to cleanse an area, which definitely feels a bit, at times, like extra padding in what is already a short and breezy adventure. That, and while it introduces new weapons and powers, I never felt anything was mechanically that deep or pushing the genre forward in any way.

All in all, Flynn: Son of Crimson is a fun and short adventure that’s pleasing to look at with a story that doesn’t get in its way. While it never quite hits the highs of Shovel Knight my time with it was pleasant, if a little too breezy at times. If you’re in need of a beautiful but short 2D adventure, spending an afternoon with your pal Dex to set the world right is an easy recommendation to make.

The post Flynn: Son of Crimson Review – A Short Enjoyable Walk With My Dog appeared first on COGconnected.