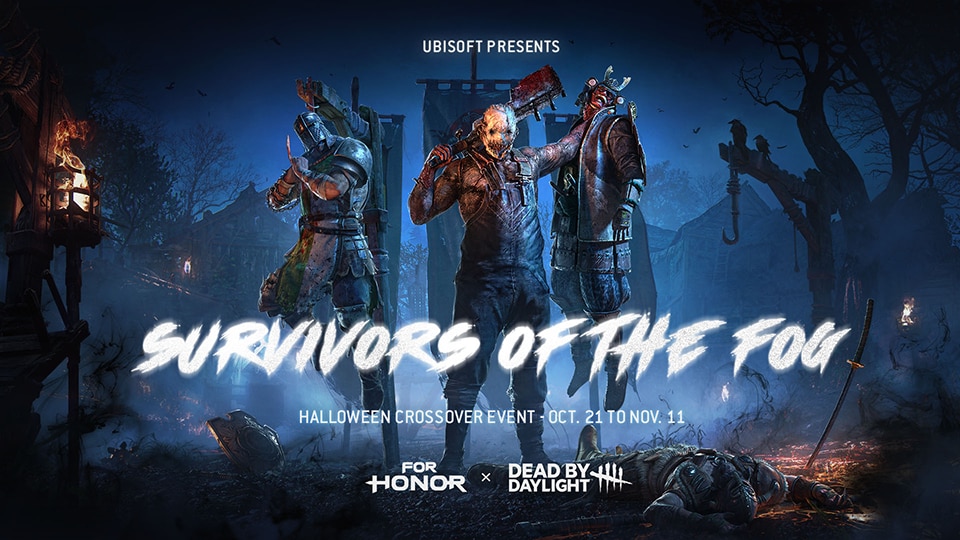 For Honor is no stranger when it comes to over-the-top Halloween events. However, this year the team at Ubisoft Montreal are going all-out, announcing a crossover with Dead By Daylight.

Available from today, October 21, 2021, through to November 11th, For Honor will play host to Dead By Daylight mascot, The Trapper.

This fearsome killer will look to hunt down and slaughter unsuspecting warriors in For Honor’s new game mode – “Survivors of the Fog”.

Much like Dominion, it’s a 4 versus 4 team based mode. However, instead of AI minions serving as fodder, you’ll go up against The Trapper – a formidable foe who can be slain for a big point bonus. Meanwhile teams will be stalking the redesigned map, looking to hold down control points until their opponents break. Sadly, you won’t be able to unlock The Trapper as a playable hero, just like we didn’t get to play as the Prince during For Honor’s Prince of Persia crossover.

For those taking part in the Halloween slaughterfest, there’s more content to find:

During this event, players will be able to play through a Free Event Pass and gain access to a multitude of rewards such as a new Battle Outfit, an Effect as well as an Ornament. Along with the free event pass rewards, players will also have access to limited-time Dead by Daylight themed executions, illustrious outfits and an exclusive signature.

Released in 2017, For Honor is still supported by regular community events, competitions, and content drops. We’re current in Year 5 Season 3 (Y5S3) with a new hero set to join the ever-growing roster by the end of the year.

As for Dead By Daylight, we recently re-reviewed the multiplayer horror hit, bumping up its original score:

“Dead By Daylight has evolved into somewhat of a phenomenon, proving that the often maligned games-as-a-service model produces more than just cookie cutter loot shooters. It’s still an acquired taste and a bit rough around the edges though stands out as one of the most unique ongoing multiplayer games of the generation.”

Those who currently own a copy of Dead By Daylight on PlayStation 4 and Xbox One can upgrade for free on the PS5 and Xbox Series X|S respectively, carrying over their progress – here’s how.