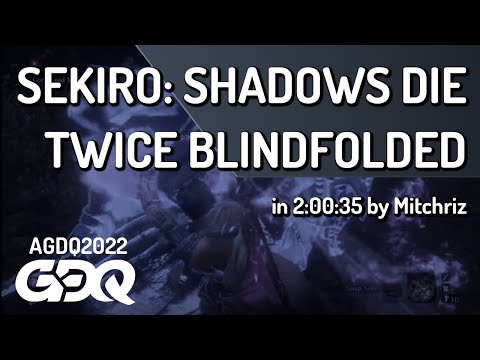 The Thursday letters page is sad to think Simply Games might no longer exist, as one reader asks for proof of beating Sekiro blindfolded.

Follow the money
Interesting to see that the shortages for Xbox Series X might finally be coming to an end, Microsoft solving the problem the same way it always solves problems: by throwing money at it. It’s interesting that the news should come through now though, because I just made the decision to get an Xbox over a PlayStation 5. Essentially, it’s exactly because of things like this, because they have demonstrated again and again that they are willing to spend any amount of money to win fans and, well… it works.

I realise it’s ‘cheating’ and there’s nothing Sony can really do in response but as a consumer that’s not really my problem. I can only afford, and only really want, one console and I’m going to go with the one that offers me the best value for money and the best long term prospects, and that is clearly Xbox Series X with Game Pass.

Exclusives do matter but apart from Returnal nothing has really interested me from Sony this gen yet. Microsoft has been even worse so far but they clearly have the potential to do a lot better, starting with Starfield this Christmas. It’s that potential that’s the important thing when picking a console that’s going to last you at least five years, and this gen I’m going with Xbox.
Kabden

Building another
Got a bit of time in on Lego Star Wars: The Skywalker Saga today with my kids and it was just as much fun as I hoped. The first thing that grabbed me though are the graphics, which look great. The whole thing seems very substantial and a lot more ‘classy’ than the previous games, so it’s nice to see the developer has been given the time to add some polish this time round.

It does however bring the question of what will be next, especially if Traveller’s Tales is only going to end up making one more. I think the obvious answer is an Avengers: Infinity Ward game but I don’t know how easy that is to licence nowadays compared to the last time they did one. It could be a DC game as well but all that usually means is Batman and friends and I’m all Batman-ed out.

I guess Harry Potter is the other obvious guess but thankfully that’s something the kids have never got into, so it holds no interest to me. I’m not sure what else thy could do if it’s dependent on Lego already having the licence. A Super Mario game might seem obvious but how exactly would that work? I don’t see a reskinned Super Mario Maker being quite as popular.
Dolan

The real Daredevil
I see a lot of talk regarding people being pretty miffed at these Elden Ring speedruns. However, I find them totally credible. What I find incredible is the guy that completed Sekiro: Shadows Die Twice blindfolded!

Do GameCentral know if this is legit? Sadly I had to abandon the game at that 7 spears mini-boss, just haven’t got the reaction times for this game. I can’t comprehend how somebody could do this blindfolded.
Amazing if it’s true. Like that film about the blind swordsman, Zatoichi.
Vaughan (Tiddleydwarf – PSN ID)

GC: You can watch it right here; a bunch of people have done it. We don’t think anyone’s miffed about any of it though, just bemused at how it’s even possible. He beats the final boss without taking any damage.

Three demands
I’ll be very interested to see what they do with the new Tomb Raider as I’m hoping they’ve got the grimdark serious Lara out of their system now and we can go back to the fun, snarky one from the original games. The biggest problem with the reboot trilogy is that Lara was too serious and there was too much focus on action. I’m not say there should be no but the first one in particular was basically just a third person shooter and Lara just constantly murdering people even in the third one made no sense.

Actually, there’s another thing they need to do and that’s get an actual good story. I can’t think of a single Tomb Raider that isn’t goofy nonsense that makes Indiana Jones look like a documentary. It didn’t matter with the old game but now that things look so realistic it would be nice if we had a plot that didn’t seem like it was ripped off a Saturday morning cartoon.

And please, whatever happens, no more Norse mythology. Try something original, try something that makes sense, and try something that’s fun. I know it’s not as easy as I’m making it but Tomb Raider used to be the best game around and I’d like to see it return to that.
Chooper

Changing times
Sad to hear that Simply Games may have bit the dust. I’ve used them many times in the past but I think it says a lot when I didn’t even realise that their website had been down for a month. I guess I’ll probably never get to use them again now, as like most people I now buy almost everything digitally.

Not usually on day one but wait just a little bit and you can get some great deals that are well worth waiting for, and then you get all the benefits of games at your fingertips and no having to mess around with discs.

I’m already feeling nostalgic about getting a new game from Simply Games days before any of my friends, just because they always ignored release dates. Especially as that’s one thing that digital games are definitely not going to do. It’s a shame but times change and nothing lasts forever.
Focus

Only issue I might imagine is the PlayStation VR not being happy with an extra device between itself and the console, and of course needing a second free port on the telly. Hope this helps.
Joe

Just a suggestion for Not the Cable Guy’s dilemma. You can buy HDMI extensions leads. I use one to switch between consoles. This means you do need to switch them over but not behind the TV. The extension lead will probably be in a much more convenient location. I use one that’s hidden just out of view behind a cabinet. And additionally, the HDMI socket on your TV will not get worn. Hope this helps.
Manic miner 100 (gamertag)

Incidentally, in the current issue of Edge magazine they have a walking simulators feature.
Andrew J.

Publisher battle
Is it just me or is Ubisoft just the worst? They’ve got all the same toxic workplace problems as Activision but on top of that none of their games are even any good, just the same cookie cutter blandness again and again. They seem to have got especially bad in the last year or so with this push for live service games, with decision after decision that just seems to do nothing but upset fans.

They’re attitude towards NFTs is terrible too. I mean, when you’re making EA look reasonable you know you’re doing something wrong but even after being told by everything that NFTs were a bad idea and they didn’t want them Ubisoft has just turned around and basically said: ‘Tough, you’re getting them anyway.’

I don’t usually pay that much attention to who a game’s publisher is but I can’t remember the last Ubisoft game that I even wanted to play, let alone enjoyed. I just don’t see any love or passion in the games they make, they’re just vehicles for microtransactions and NFTs and other money-making scams. Perhaps Ubisoft are just worst at hiding it, and all the big publishers are basically the same, but it doesn’t seem that way at the moment.
Starker

Inbox also-rans
Loved the modern Tomb Raider trilogy but sincerely hope Crystal Dynamics are now doing a remake of the original 32-bit one. Less Hollywood combat and more quiet puzzling please – seems the obvious was for the franchise to go.
NongWen (PSN ID)

Nice to see Lego Star Wars get such good reviews and it’s going to be fun switching between that and Elden Ring. I wonder which will take longer to 100%?
Korbie

This week’s Hot Topic
The subject for this weekend’s Inbox was suggested by reader Gannet, who asks what’s your favourite game that isn’t a classic?

It doesn’t have to be a bad game but what title do you enjoy even though you know not many other people think highly of it? Why is it you like it, and does it have anything to do with nostalgia, a famous licence, or the game having some greater meaning to you in terms of when you first played it?

Do you regard it as a genuinely good game or a mediocre one that you just happen to enjoy? Does its reputation, or lack of one, bother you and do you think it is unfair earned?