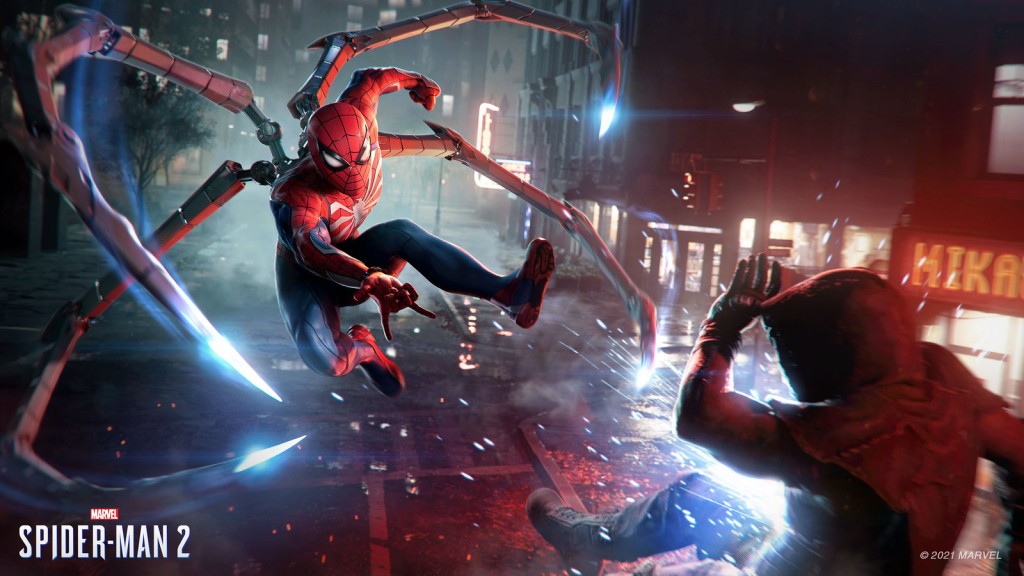 The Monday letters page debates the seriousness of Sonic The Hedgehog and Super Mario, as a reader is upset at the lack of new Batman games.

Show and tell
So we all know Sony’s big (aka only) exclusive game this Christmas is God Of War Ragnarök but as someone that didn’t really like the last one that hasn’t got me that excited. As far as I can work out, they only have Spider-Man 2 confirmed for 2023, which is interesting as that’s about the only game that doesn’t appear on that leaked list of games.

That leak was pretty convincing, but also pretty boring if you ask me. I couldn’t give a fig about Twisted Metal and Death Stranding 2, and if ‘Camden’ is a live service game that’s probably going to be awful too. I do like the idea of two new survival horrors but they’re usually pretty low budget affairs and I can’t see them being Sony’s big new things.

That only leaves ‘Carbon’, an unnamed open world game, and Rise Of The Ronin, which I did actually like the look of when they showed it off. Unfortunately. it’s not out until 2024 though. Probably most of the games are.

The point which I will now attempt to come to, is that it’s so much easier to get excited by games if you see a bit a footage and get an official announcement, instead of a vague pre-rendered trailer from two years ago or a codename on a leaked document.

Show game, get excited about game. It’s a pretty simple process that Sony and Microsoft both seem to have forgotten. Which is especially odd given how few imminent games they have to talk about at the moment.
Gloin

Serious attitude
Even though it shouldn’t be a surprise, given Illumination’s involvement in The Super Mario Bros. Movie, the biggest impression I took from the trailer was how light-hearted it is. I’ve always perceived Mario as more straitlaced than Sonic The Hedgehog (besides the Paper Mario series), although the latter is rarely funny, however much thinks it tries to be. So, there already seems to be a tonal point of difference with the games, which I found really intriguing.

I was slightly less enthused by the implication that Mario is being introduced to the Mushroom Kingdom for the first time. It’ll no doubt lead to whacky humour as he encounters various power-ups without any knowledge of what they do, but surely the overall setup is well-established enough not to need to do an origin story.
Needlemouse91

GC: We can’t agree with any of that. Sonic takes itself peculiarly seriously at times, even in some of the early games, while the Mario games are full of whimsy and surreal nonsense. Also, the first few Paper Mario games are some of the most consistently funny in all gaming.

It’s just a job
Once again, a celebrity declaring their love for video games manages to sound completely unconvincing and contrived.

Well done, I’m sure you can beat the high score with your special move on the final level.

No need to pretend Chris, just do what you’ve been paid for, it’s OK.
Bad Edit
PS: After watching the French and Italian dubs of The Super Mario Bros. Movie trailer I have to say they got the better deal regarding Mario’s voice.

Now I very much want to see live action segments bookending the Super Mario Bros film, like I think they used to do with the old cartoon show? And it absolutely must have Chris Pratt dressed as Mario, fake ‘tache and all.

The classics
Just a small thought but it’s interesting how video games have never been able to do anything of worth with classic movie monsters like Dracula, Frankenstein (I know that’s not the monster’s name!), and the Wolfman.

Seems like it would be a super obvious set-up for some sort of multiplayer game but I can’t think of anything recent like that, and certainly nothing good. I would’ve thought that they’re all public domain too, which makes it even stranger.

Maybe if the Dark Universe had taken off?
Goji

Gaming masochism
Just writing to praise the Cyberpunk 2077 article this past weekend. Really well written and absolutely correct in my view. I’d also like to take a moment to scream into the ether about gamers continuing commitment to being treated like trash by large multi-national companies.

If you don’t stop buying these games then nothing will ever change. To be honest, I’ve just come to accept that that’s the way it will be now. I’m very close at this point to being an ex-gamer, who’s genuinely upset about the state of the industry. Anyway, I’m sure something will come along that pulls me back in.
Chris

Pokémon’s creed
Agree 100% with the Reader’s Feature on Pokémon at the weekend. Pokémon has basically reached an Assassin’s Creed situation where they’re knocking them out so quickly and so often that there’s no chance of any of them being any good, let alone innovating.

After Syndicate, Ubisoft took the decision to regroup and take a break and the result was Origins and a rebirth for the franchise, which worked out well for everyone. Nintendo needs to make that same decision. Take a break and make a real effort to reinvent the games with better technology and new ideas.

And like Royston says, for heaven’s sake have a recruitment drive. Less than 200 people for a franchise the size of Pokémon is insane. I don’t blame them at all for the state of things. You can’t even put it down to poor management, at Game Freak at any rate, as they seem to be doing the best job they can with the time and resources they’ve got.

Whoever is making the big decisions at Nintendo/The Pokémon Company really needs to make some big changes before all this catches up with them. They won’t, of course though. They’ll just let the whole thing collapse in on itself and then, finally, think about doing something about it.
Focus

Time to move on
I did it! I finally did it! After over 230 hours of playtime, I managed to finish the Ending with the fourth and final character in Slay The Spire!

I was pretty elated to do so after many, many failed runs to finally get that victorious one. After successfully managing that personal challenge, I can look forward to a few of my most anticipated games, namely Final Fantasy 7 Rebirth, Sonic Frontiers, and The Legend of Zelda: Tears of the Kingdom.
Paul Conry

The delayed knight
I really want to talk about the spoilers for Gotham Knights but I can’t. But let me just say this: I already had a bad feeling about the game and that certainly hasn’t gone away thanks to these new revelations. It’s a shame that Warner’s game division didn’t get sold off to someone else as it’s criminal how little effort has been made to make new Batman games, or anything else DC. We’re not even getting Injustice 3 now, by the sounds of it! And I’m willing to bet that Wonder Woman game never sees the light of day.

It seems to me that the machinations of giant companies is having a more and more serious effect on the games industry lately, to the point where I fear they will tear it apart. It’s becoming increasingly hard to believe that any big budget game is being made with any love or ambition, rather than just ticking boxes on a corporate checklist.

I’d love to play a great Batman game but by the time one even has a chance to come out it’s going to be at least a decade since Arkham Knight (ignoring the fact that it was a disappointment anyway). Just give the licence to someone that can actually make some games in a timely manner if you’re going to be like this.

It’s not just DC either. Mortal Kombat is being affected in the same way, with nothing but a trailer to celebrate 30 years of games. The only thing worse than acquisitions is sitting on franchises and licences doing nothing with them for the sake of corporate politics.
Prodo

Inbox also-rans
I have two PC game codes to give away to readers I got from Prime Gaming, that I’m not going to use. They are for Fallout 76 on Microsoft Store and Middle-Earth: Shadow Of War on GOG.
Big Angry Dad82 (gamertag)

GC: That’s good of you. If anyone wants them, we’ll give one each to the first people to contact us with a normal, useable Inbox letter.

Just watched all of the Cyberpunk 2077 Netflix series and I really enjoyed it. Ultra-violent and another poignant story of aiming to be a legend. Is it enough to make me play Cyberpunk 2077 again? No! I need loads of DLC. I would still put the game in my top five of the last generation but I drained it dry and need something juicy for me to come back to it.
TommyFatFingers

This week’s Hot Topic
The subject for this weekend’s Inbox was inspired by reader Chevy Malibu (PSN ID) and asks what is your most replayed video game?

You can count multiplayer games if you want but ideally we want to know what game you come back to every few years to play through again. What is it about the game that you enjoy revisiting so often and how much of it is due to nostalgia and other external factors?

What makes a game replayable and do you consider it an important feature? Are there any games you don’t have the time or skill to replay again or perhaps there’s some for which once was enough, even though you enjoyed it the first time.