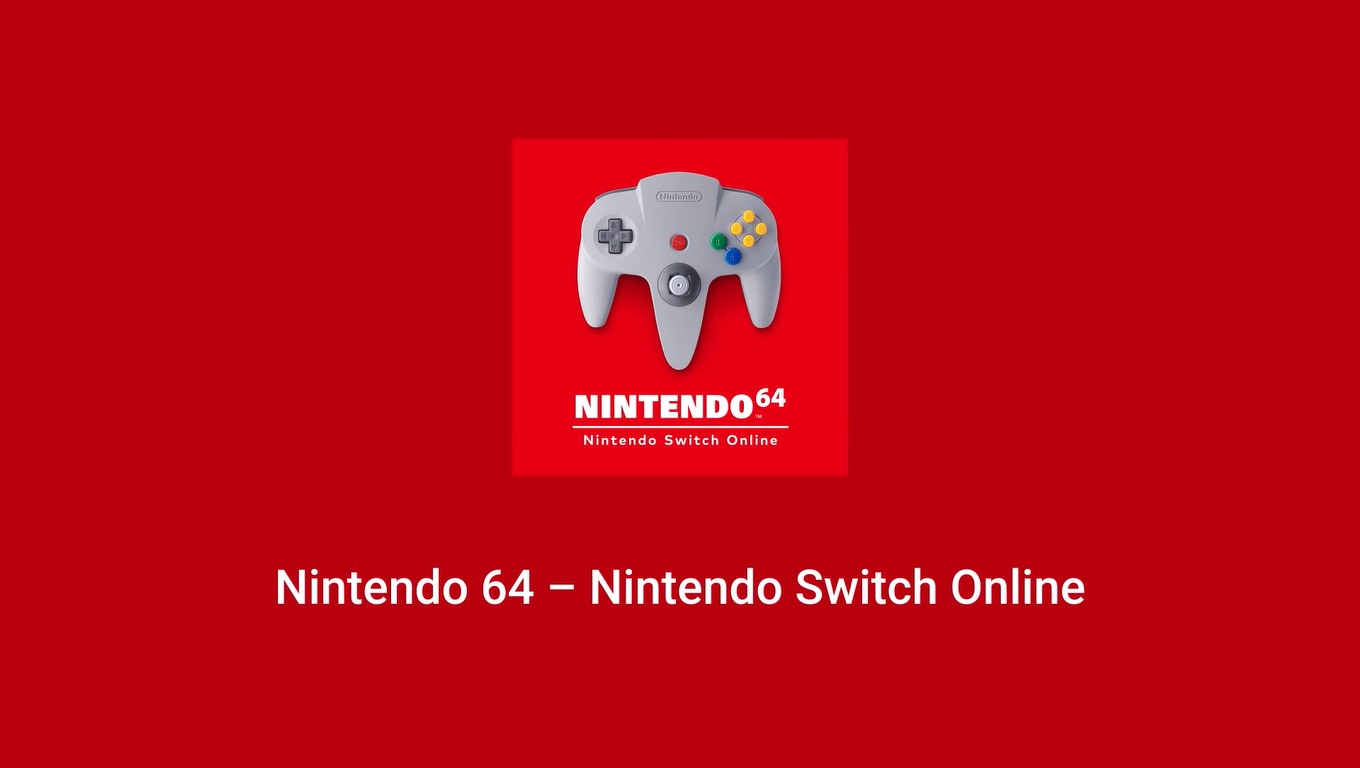 Shocked, not shocked
Why am I not surprised that the Expansion Pack for Nintendo Switch Online has turned out to be a disaster from the very start? I thought that the emulations might have problems, but I am genuinely shocked that things are as bad as they sound. It sounds completely broken, in a way that will take a long time to fix.

I have to admit I haven’t tried it for myself – why would I? – but all those videos on Reddit and Twitter don’t lie. The whole thing seems horribly rushed for no reason at all and I imagine it’ll put many people off for good or cause a price cut, or probably both.

Once again, we see that Nintendo are the absolute worst when it comes to preserving their history, which is crazy because they have the longest and most revered history of anyone. Super Mario 3D All-Stars was an absolute disgrace, in terms of the amount of work put into it, and everything else just seems to be made based on whether Nintendo needs a bit more money that month.

There’s no consistency in terms of the quality of the emulation/remasters or when and what gets brought back. They really should take a leaf out of Microsoft’s book, and there’s not many things you can say that about.
Conan

Carried away
Regarding Austin’s letter in yesterday’s Inbox who said Halo Infinite is up there with the best PlayStation 5 games. While I agree it looked much better and was a vast improvement from its first reveal we shouldn’t get carried away. Compare it to what we’ve seen of Horizon Forbidden West, for example, and it’s clearly not at that level either visually or in its fluid gameplay.

It’s also clear that Halo Infinite is a game that’s gone through many twists and turns in its long development and doesn’t quite know what it wants to be. It remains to be seen whether all these new elements actually work as a Halo game.

Secondly, he implied that Halo is somehow deserving of extra credit compared to PlayStation 5 games because it’s ‘cross-gen with Xbox One’. This is an odd comment because it’s already well documented that upcoming PlayStation 5 games such as Gears Of War: Ragnarök and Horizon Forbidden West are themselves cross-gen titles and it’s something that Sony have actually gotten criticism for rather than praise.
Russell

GC: Maybe he was referring to the fact that the Xbox One is less powerful than the PlayStation 4.

Combat Overhauled
After yesterday’s second showing I really like what I’ve seen of Halo Infinite’s campaign and multiplayer and I’m looking forward to getting stuck in on December 8th.

The graphics haven’t impressed me, mind. I think it looks lovely, I’ve always liked the Halo aesthetic. I’m glad as well it doesn’t look like it’s been made by the Pimp My Ride crew, which I felt was how the Halo: Combat Evolved overhauled graphics looked. But I wouldn’t say the graphics are impressive. The first Halo was on the cutting edge of graphics, Halo Infinite is not really anywhere near the forefront of graphics.

The action and gunplay looked superb though. I also welcome the semi-open world. Crash landing in the first Halo and looking up at the Halo ring as it stretched up into the sky is an iconic gaming moment for me. My favourite bits of Halo were exploring the lush green outside spaces, getting into large scale firefights, and it looks like you’ll be doing that a lot in Infinite. I also hope that the open world will give the opportunity to flesh out the lore like God Of War did. That game had a tight, compelling main story while offering an interesting semi-open world to explore.

The Master Chief Collection had these terminals to find that filled out the lore. They were a bit like hidden collectibles, but I don’t know why they usually put them a little off the beaten track as they were really good, and I found them interesting. It’s probably for pacing reasons as Halo is traditionally a fast-paced short campaign but Infinite is going for something a little different and I’d like to make discoveries like the terminals exploring Zeta Halo.

The second showing video made it seem more like the expanded world would be used for uninspiring fair of Ubisoft camp clearing but we will see soon enough.
Simundo

Future audience
Thank you for the review of My Friend Peppa Pig. I wasn’t sure whether you’d do it because it’s not a ‘real’ game but you made some good points about how there are so few good games for kids nowadays.

What also occurred to me is that by not creating content for all ages Sony and Microsoft are limiting their own future audience. If you didn’t grow up with ‘proper’ video games then it’s less likely that you’ll get into them when your older. They don’t have to turn into Nintendo but I can’t think of single recent Microsoft franchise aimed at kids and the closest for Sony is Ratchet & Clank?

They should both be doing better or there’ll be here in a few years wondering why nobody likes their games anymore and they’re all off playing gatcha rubbish on mobile phones.
Coste

Rounding up
So, I was planning to upgrade from Nintendo Switch Online to have the expansion, then I saw the conversion rate – 4p/day for existing customers. £17.99/365 is actually 5p when correctly rounded, this means that converting my remaining subscription would cost me over £3 more than it should.

They’ve managed to make an already barely appealing expansion pass even less appealing for existing users by making it more expensive for existing users to migrate than for new users to buy, which is backwards. They have lost an upgrade to me – I instead went for a year of PlayStation Now for £25.

I’m hoping GameCentral can use their powers to chase the powers that be at Nintendo to correct this glaring error.
Chocobogamer

GC: What makes you think it’s an error?

Metroidvania fears
Very good Reader’s Feature at the weekend, about Nintendo’s approach to Metroid, and I share most of Whisper’s concerns. Nintendo has published 18-rated games itself before, most obviously Eternal Darkness, but that still never felt like a proper first party release. It wasn’t by an internal studio and I get the feeling it was all a push from Nintendo of America, no Japan.

Metroid might not be that big in terms of sales, compared to Mario and Zelda, but I really don’t see Nintendo taken one of their iconic franchises and turning it into an actual survival horror, even though that would clearly work.

In fact, now I come to think of it, why haven’t there been any survival horror Metroidvanias? I know things like Castlevania and Dead Cells have horror style imagery but even something like Blasphemous isn’t meant to be scary. I guess Bloodborne is the closest you can get, even though it’s not a true Metroidvania.

Sounds like an obvious idea to me, and one that Nintendo would never pursue in a million years.
Robbie

No one cares
I going to admit I have zero faith in the new Splinter Cell being any good, and that’s not a slight on Ubisoft (I liked Far Cry 6!). People just aren’t interested in stealth anymore and without stealth Splinter Cell is just a generic third person shooter.

I can see where the idea of making it like Hitman came from but Hitman isn’t very popular either, that’s why Square Enix sold it and the developer. Io can still make a profit from it as their own thing but I don’t see any major publisher being happy with the returns it must get.
Andio

Xbox console of 2042 will use quantum technology predicts Microsoft

You gotta believe
Really excited to play Guardians Of The Galaxy at the weekend and I’ll be honest I never expected it to review as well as it did. It does make me wonder how companies go about promoting some of these games though as it often seems a bit of a shambles. Someone mentioned Halo Infinite the other day, which I agree has been handled badly, but there’s endless lists of games that are good and have poor marketing or bad ones that are over hyped with ‘good’ marketing.

When Guardians Of The Galaxy was first unveiled it almost seemed like Square Enix was embarrassed of it and were just pushing it out quickly to get it over with. I assume a game like that must’ve been in development for at least four years and yet we only heard about it a few months before it came out. I suppose you could say that was because of the pandemic but no other games seem to have had that same trouble.

It all turned out oaky in the end so I guess it doesn’t matter but sometimes I wonder how much publishers really believe in their products and if they genuinely think that quality matters or if they secretly think it’s all down to marketing and, in this case, decided the game wasn’t worth the trouble. Who knows what goes in their mind though, considering most of the time they can’t even manage to pick a release date that isn’t shared by 10 other big games.
Akira

Inbox also-rans
I know it’s probably getting into your busiest time of year, and I also know that you’ve reviewed this game across various formats umpteen times, but I was wondering if you had an opportunity to play Resident Evil 4 on Oculus or have any plans to do so?
Chris

GC: We reviewed it last week.

Have to say that I am really happy to hear that Trevor McDonald will be the new GamesMaster when the show returns. I remember him from ITV News at 10 and he was one of the best presenters ITV news ever had. GamesMaster show is going to be amazing now.
gaz be rotten (gamertag)

This week’s Hot Topic
Since it’s Halloween this weekend the question for the next Hot Topic is what’s the most scared you’ve ever been by a video game?

It doesn’t have to be from a horror game but what’s the most frightened you’ve ever been? How does that compare to how scared you’ve been by a movie or TV show and what do you think games do better or worse compared to other media, when it comes to horror?

What game has the creepiest atmosphere, even if it’s not outright scary, and was it ever bad enough that you had to stop playing? (To avoid everyone mentioning it, the dogs jumping through the window bit in Resident Evil is banned from this Hot Topic.)