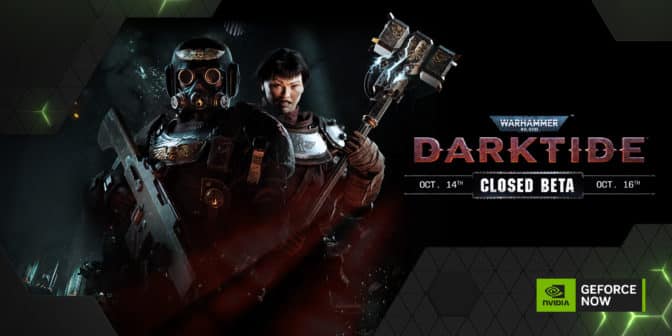 GeForce NOW RTX 3080 members can now stream their favorite PC games at up to 1600p and 120 frames per second in a Chrome browser. No downloads, no installs, just victory.

Even better, NVIDIA has worked with Google to support the newest Chromebooks, which are the first laptops custom built for cloud gaming, with gorgeous 1600p resolution 120Hz+ displays. They come with a free three-month GeForce NOW RTX 3080 membership, the highest performance tier.

On top of these new ways to play, this GFN Thursday brings hordes of fun with 11 new titles streaming from the cloud — including the Warhammer 40,000: Darktide closed beta, available Oct. 14-16.

Google’s newest Chromebooks are the first built for cloud gaming, and include GeForce NOW right out of the box.

These new cloud gaming Chromebooks — the Acer Chromebook 516 GE, the ASUS Chromebook Vibe CX55 Flip and the Lenovo Ideapad Gaming Chromebook — all include high refresh rate, high-resolution displays, gaming keyboards, fast WiFi 6 connectivity and immersive audio. And with the GeForce NOW RTX 3080 membership, gamers can instantly stream 1,400+ PC games from the GeForce NOW library at up to 1600p at 120 FPS.

That means Chromebook gamers can jump right into over 100 free-to-play titles, including major franchises like Fortnite, Genshin Impact and League of Legends. RTX 3080 members can explore the worlds of Cyberpunk 2077, Control and more with RTX ON, only through GeForce NOW. Compete online with ultra-low latency and other features perfect for playing.

The GeForce NOW app comes preinstalled on these cloud gaming Chromebooks, so users can jump straight into the gaming — just tap, search, launch and play. Plus, pin games from GeForce NOW right to the app shelf to get back into them with just a click.

For new and existing members, every cloud gaming Chromebook includes a free three-month RTX 3080 membership through the Chromebook Perks program.

Fatshark leaps thousands of years into the future to bring gamers Warhammer 40,000: Darktide on Tuesday, Nov. 30.

Gamers who’ve preordered on Steam can get an early taste of the game with a closed beta period, running Oct. 14-16.

Head to the industrial city of Tertium to combat the forces of Chaos, using Vermintide 2’s lauded melee system and a range of deadly Warhammer 40,000 weapons. Personalize your play style with a character-creation system and delve deep into the city to put a stop to the horrors that lurk.

The fun doesn’t stop there. Members can look for these new titles streaming this week:

Finally, we have a question for you – we promise not to tattle. Let us know your answer on Twitter or in the comments below.

Be honest, how many times have you played games on GFN with chrome browser in class or a meeting?