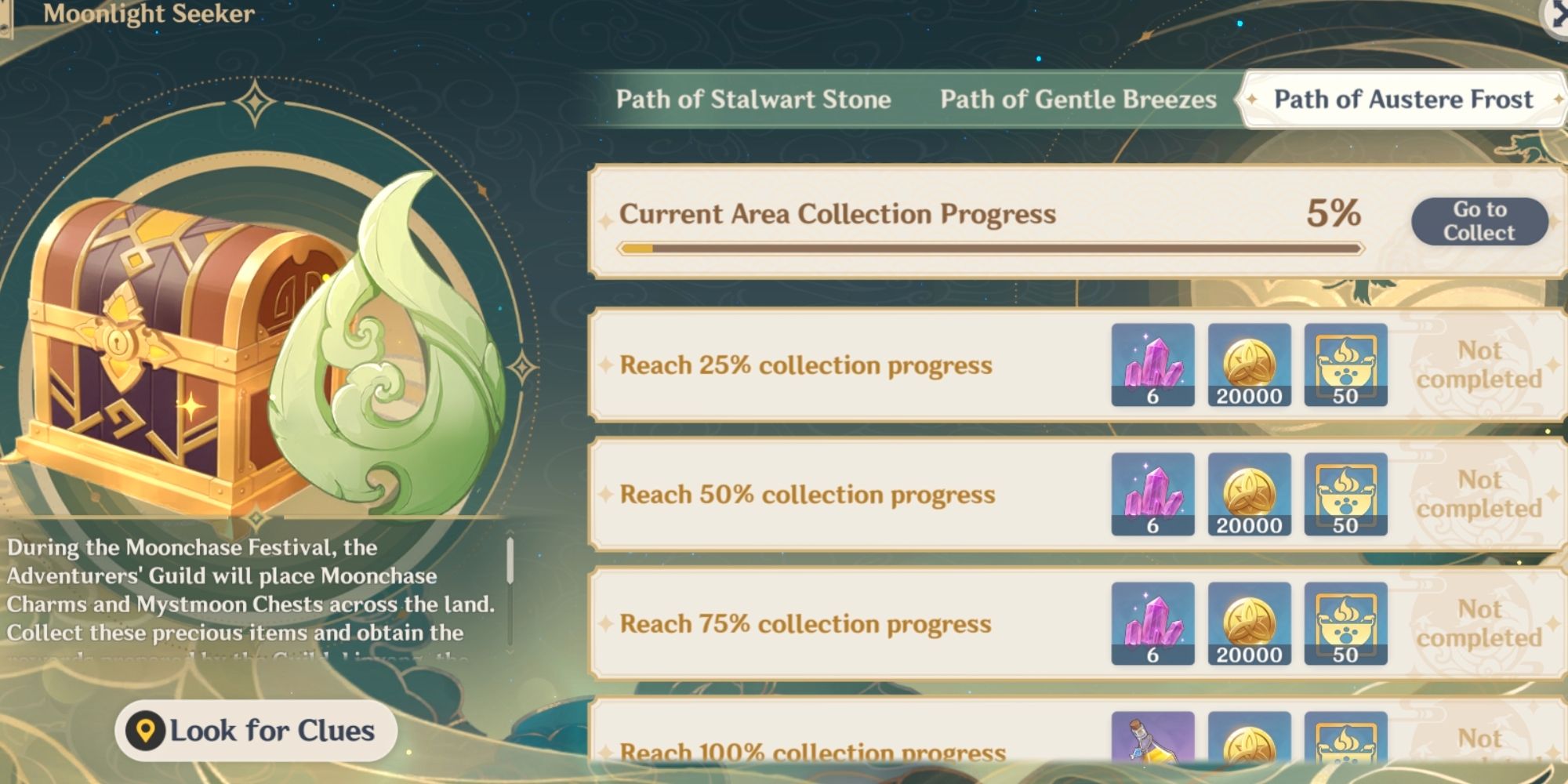 The Moonlight Merriment event has finally entered the last stage in Genshin Impact. The third path, Path of Austere Frost is now available to explore. The word “Frost” is an obvious hint that the last area is located in Dragonspine. Although there’s no more story to go through, players can still enjoy their time to hunt Mystmoon Chests and Moonchase Charms. This event yields one of the highest Primogems in Genshin Impact. In total, Moonlight Merriment gives over 1000 Primogems for players to enjoy. This is far higher than the usual 420 Primogems.

Mystmoon Chests yield five Primogems each, along with some other loots. As for Moonchase Charms, they have the same system as Oculi. The charms will show up on the map if they’re nearby, making it easier for players to collect them.

After obtaining 100% progress, players will also gain the last Emperor Balsam, allowing their Luxurious Sea-Lord claymore to reach maximum refinement. Other than that, the path also rewards 18 Mystic Enhancement Ores and 80000 Mora.

Path of Austere Frost covers the northern part of Dragonspine. Players can start their exploration from the Dragonspine camp. They will find the first Moonchase Charm and Mystmoon Chest near the bridge. After that, they can walk along the shore to collect some chests.

Because Dragonspine is a mountainous area, some items can be collected with some climbing. So if some items aren’t discoverable on the ground, players should consider searching the higher ground.

Path Of Austere Frost Hint From Linyang In Genshin Impact

As usual, players can speak to Linyang whenever they need help with their collection. This time, Linyang will mention that the one responsible for the Dragonspine chests is Iris. However, speaking to Iris will not result in any special conversation.

If players haven’t finished the previous areas, they can ask Linyang for multiple places at once. However, just like before, players can only ask Linyang once per day for every area.

Moonlight Merriment is an event to celebrate the Moonchase Festival in Liyue. Moonchase Festival is the second major festival held in Liyue. In Genshin Impact 2.1, this event revolves around the origin of the Stove God. By the end of the story quest, it is revealed that Guoba, Xiangling’s panda-like companion, is actually the weakened Stove God.

Genshin Impact is now available on Mobile, PC, PS4, and PS5. A Switch version is in development.