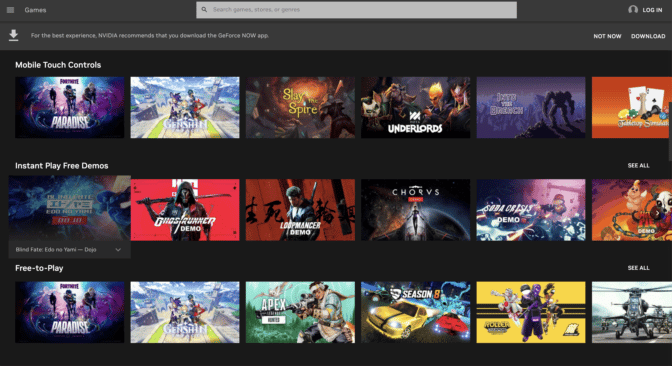 GeForce NOW expands touch control support to 13 more games this GFN Thursday. That means it’s easier than ever to take PC gaming on the go using mobile devices and tablets. The new “Mobile Touch Controls” row in the GeForce NOW app is the easiest way for members to find which games put the action right at their fingertips.

And since GFN Thursday means more games every week, get ready for eight new titles in the GeForce NOW library, including A Plague Tale: Requiem.

Victory at Your Fingertips

Gamers on the go, rejoice! Enhanced mobile touch controls are now available for more than a dozen additional GeForce NOW games when playing on mobile devices and tablets.

These games join Fortnite and Genshin Impact as touch-enabled titles in the GeForce NOW library, removing the need to bring a controller when away from your battlestation.

Here’s the full list of games with touch-control support streaming on GeForce NOW on mobile devices and tablets:

To get right into gaming, use the new “Mobile Touch Controls” row in the GeForce NOW app to find your next adventure.

The Razer Edge of Glory

Announced last week at RazerCon, the new Razer Edge 5G handheld device launches in January 2023 with the GeForce NOW app installed right out of the box.

The Razer Edge 5G is a dedicated 5G console, featuring a 6.8-inch AMOLED touchscreen display that pushes up to a 144Hz refresh rate at 1080p — perfect for GeForce NOW RTX 3080 members who can stream at ultra-low latency and 120 frames per second.

The Razer Edge 5G is powered by the latest Snapdragon G3x Gen 1 Gaming Platform and runs on Verizon 5G Ultra Wideband. With a beautiful screen and full connectivity, gamers will have another great way to stream their PC gaming libraries from Steam, Epic, Ubisoft, Origin and more using GeForce NOW. Members can reserve the upcoming Razer Edge 5G ahead of its January 2023 release.

Members can also stream their PC libraries on the Logitech Cloud G handheld and Cloud Gaming Chromebooks from Asus, Acer and Lenovo, all available beginning this week.

That’s not all — every GFN Thursday brings a new pack of games.

Start a new adventure with the newly released A Plague Tale: Requiem, part of eight new titles streaming this week.

How are you making your gaming mobile? Let us know what device you’d take on a trip with you on Twitter or in the comments below.

You’re going on an unexpected trip in an hour, what mobile device are you bringing so you can keep gaming on GFN?