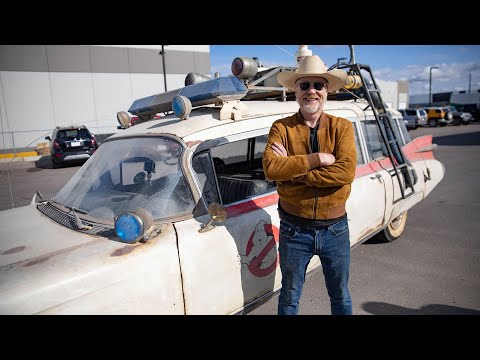 There few cars as iconic in pop culture as the Ghostbusters' Ecto-1, the tricked-out white 1959 Cadillac Miller-Meteor Futura Duplex that won the hearts of so many during the '80s, including former Mythbusters’ host and special effects expert Adam Savage, who got a rare opportunity to try it out for himself.

With Ghostbusters: Afterlife only two months away from its premiere, a lot of speculation has circled on how Jason Reitman will manage to bring Dan Aykroyd and the late Harold Ramis’ masterful work into the modern age, and that’s all before considering his father directed the original movies. Previously, Reitman explained his vision for Ghostbusters: Afterlife, or at least part of it, putting a lot of emphasis on just how important it was to get all of the gadgets right.

At the time, Reitman explained how directing wild car scenes and drifting stunts was way beyond most of his movie experience, but that’s definitely not the case for Savage, who believes his experiments are what got him this invitation in the first place. Although the Ecto-1 looks like it hasn’t seen the light of day nor a car wash since 1989, it did undergo some serious modifications to get up and running, maybe even more than what Ray had to do in the first film, only now bringing a sparkling new Chevrolet Ls3 V8 engine that usually belongs in a Corvette or Camaro into the mix.

The entire video goes over how it feels to drive such a heavy old car that’s been enabled for full Hollywood stunt action, yet the look of sheer joy on Savage’s face speaks of a man who's had a decades-long dream come true. Of course, when Ghostbusters: Afterlife premieres Paul Rudd will likely be behind the wheel most of the time, no matter how capable the young Phoebe (McKenna Grace) and Trevor (Finn Wolfhard) look.

Naturally, getting the Ecto-1 and the rest of the Ghostbusters gear right is only part of the job, so Reitman has always expressed his main goal with the film is for newer generations to become familiar with a franchise that’s still obscure for many. The director has been quite vocal about how much the film means to his own family, though Ghostbusters: Afterlife can already boast his father’s approval.

Even if most people will never get to drive the Ecto-1, owning a piece of the Ghostbusters is now easier than ever with everything from LEGOs, Ecto-1 toys, and the Ghostbusters video game, which is surprisingly good and does a great job at telling new ghostbusting stories.

Ghostbusters: Afterlife is scheduled for release on November 19, 2021.

MORE: Is Spider-Man: No Way Home Based On This Comic Storyline?