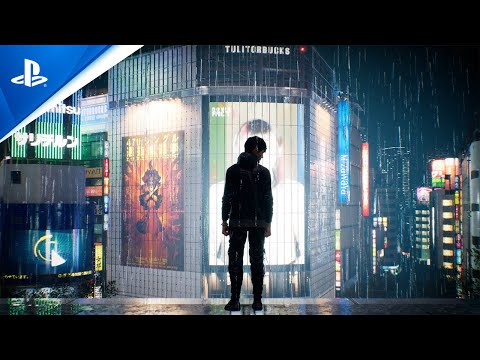 A Ghostwire: Tokyo showcase video has been released, giving us all a good long look at the upcoming first person action-adventure horror game from Tango Gameworks. Ghostwire: Tokyo is coming out on 25th March 2022 for PlayStation 5 and PC.

The game opens in the fallout of The Vanishing, an event that has made almost all of Tokyo’s inhabitants. Akito wakes up in the middle of this with a mysterious voice in your head and spooky smoke surrounding you hand and half of your face. KK will guide you in learning how to master your new abilities, harnessing the ether abilities of wind, fire and water to battle the Visitors that now roam the city.

You’ll have to upgrade and enhance these abilities through the game, using powerful coregrams, blocking incoming attack and more. You can boost your synergy with KK, able to ‘wire in’ to rip weakened enemies apart. You’ll also have Talismans that expand your combat options. All of this takes place in first person, your hands waving around like Dr. Strange.

The city is now shrouded in fog that drains your health over time and is infested with these creatures from another realm – decapitated school girl bodies, suits with umbrellas, and more. You’ll have to clear each area by cleansing Torii gates that are dotted around the city.

You’ll be able to get around quickly by grappling to Tengu Yokai around the city. This will zip you right up to rooftops in a flash. A Spectral Vision ability lets you sense and highlight points of interest and the Visitors.

Pre-orders are open for Ghostwire: Tokyo now, the game available on 25th March. However, if you pre-order the Deluxe Edition, you’ll gain access three days early.

Ghostwire: Tokyo was announced back at E3 2019, the game was originally intended for release in 2021, though has been one of the many, many, many games that have been delayed through a particularly trying period for the games industry as a whole. It is in development for PlayStation 5 and PC, a timed console exclusive to Sony’s console, despite Microsoft now owning publisher Bethesda. Xbox owners will expect to see the game release for Xbox Series X|S one year after its PlayStation 5 release.