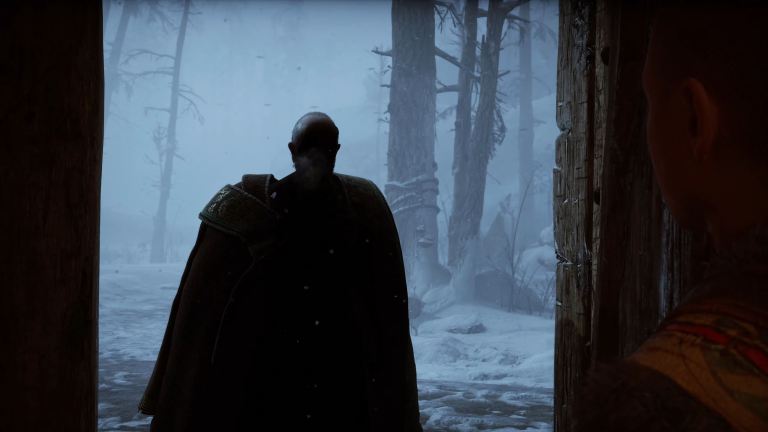 Unless you’re trying to remain entirely unspoiled about God of War: Ragnarok before you play it on November 9th, I highly recommend you check out the game’s latest story trailer. Like most of the game’s promotion material thus far, it’s an enticing preview of what is to come as well as an incredibly well-done piece of work in its own right.

If you did watch that trailer, then I’m willing to bet there is a good chance you were shaken by the impact of the voice that pops in around the 40-second mark. While the dialogue that seemingly disembodied character speaks throughout the trailer is undoubtedly powerful on its own (Kratos really isn’t the kind of god that has ever inspired love), it’s the quality of the voicework that likely left you reeling. It’s not only a great performance but there’s probably a good chance you somehow recognized the voice actor giving the performance and just couldn’t quite figure out why they sounded so familiar. Who is that character, and who is the voice actor that gives that character such gravitas so quickly?

Well, the trailer doesn’t outright confirm this piece of information on its own, but we actually already know that one of the characters speaking throughout the trailer is none other than Odin the Allfather himself. The voice actor, meanwhile, happens to be none other than the great Richard Schiff.

Many of you will probably best remember Schiff from his time on The West Wing as White House Communications Director, Toby Ziegler. While Schiff has also appeared in a number of other notable works, it’s hardly a surprise that his career is often defined by his award-winning West Wing performance. If you’re like me, that’s probably exactly where your mind went when you heard his voice in the latest God of War trailer.

At the risk of typecasting Mr. Schiff or reducing his career to his most famous role, though, I have to say that it feels like there was a pretty good chance Schiff’s West Wing performance was probably a big part of the reason he was cast as Odin. Granted, few people probably look at the Toby Ziegler character and think “that guy should clearly play Odin,” but I’m not talking about the kind of obvious physical similarities that have garnered so many unearned Oscar wins over the years.

No, I’m talking about the ways that Schiff’s West Wing performance echoes the version of Odin that Ragnarok seems to be going for. In The West Wing, Schiff played the Ziegler character as an intelligent and sometimes commanding figure who was nevertheless often burdened by the nature of his position and frustrations towards those who were beneath him (either in rank or through his own perception of self-worth). The Ziegler character was often the smartest guy in the room, and he knew it. In a way, that made him an obvious leader. In many more ways, those same qualities often made him the least qualified person for that very position.

Doesn’t that sound like the perfect version of Odin the God of War universe? Granted, we know little about Ragnarok‘s vision of that character at this time, but that trailer makes Odin seem like a god amongst gods who seems to be both above the petty squabbles of the average man and obsessed with them to the point that he’s really tired of everyone’s bullshit. In this latest trailer, we hear Odin speak of the love and admiration he receives as both a blessing and a curse. He seems to recognize the burden and responsibility that all good leaders must be aware of, yet you get the sense that having people look up to him is more important than actually doing anything productive with all that admiration.

When written well, Odin should be a complicated character to properly portray. That makes it all the more impressive that you really get a pretty clear idea of who that character is in this world through those few lines of dialog featured in that latest trailer. It’s the kind of performance that stands as both testament to the power of excellent voice casting, as well as a testament to the ways the team behind the God of War reboot has incorporated a level of emotional nuance into a series that once gleefully went as far over-the-top as it possibly could.

Maybe that’s a little too much praise for such a brief preview of Odin’s dialog, but something tells me that Richard Schiff’s performance will be one of many things we’ll soon be praising when God of War: Ragnarok is released for PS4 and PS5 in just a couple months.