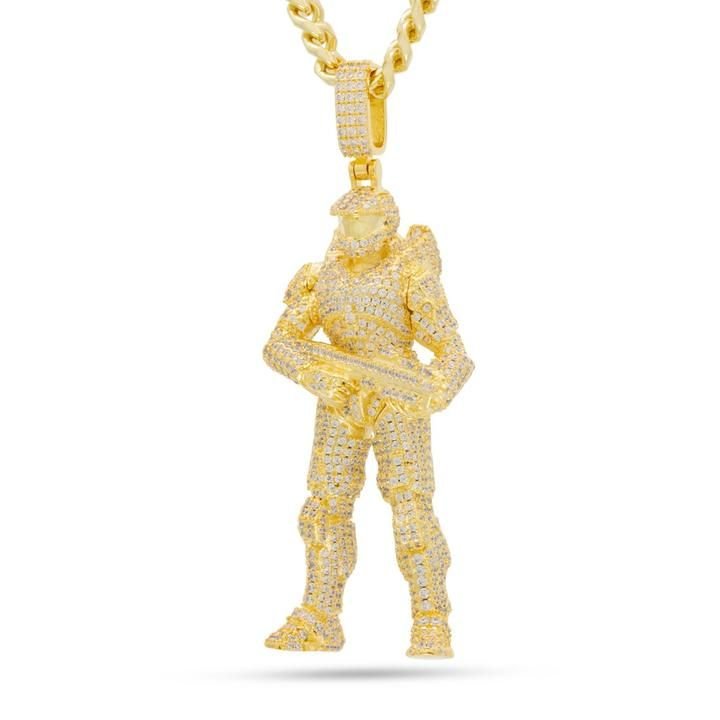 Merchandising plays a major role in the video game industry. While video games are designed to be played on screens, the influence of the characters and worlds displayed on those screens often transcends the medium. Many examples of video game characters featuring in other products exist, such as Super Mario-themed LEGO sets. Another video game series that is no stranger to merchandising deals is Halo.

As the release date for Halo Infinite draws closer, Xbox is releasing more merchandise based on the series. From a recent deal with Rockstar Energy Drinks to packaging for Trolli candies, the Master Chief’s MJOLNIR armor is popping up all over the place. In addition, Razer has launched a line of gaming peripherals themed on the franchise. Recently, a new line of jewelry was announced based on the iconic video game series.

Fans of not only jewelry but also of the Master Chief finally have a way to show off both their passions at the same time. A line of merchandise from Streetwear jeweler King Ice offers a collection of Halo-themed necklaces for fans to purchase. These new jewelry products ensure that players are ready to jump into their next Slayer matches in style.

The lineup of items available from King Ice is exciting, featuring a couple of classic weapons from the Halo series along with the iconic Spartan. The options include necklace designs for the Master Chief ($120), Master Chief Helmet ($100), Needler ($80), and Energy Sword ($80). Some of the highlights of the necklaces are 20” 5mm Miami Cuban chains and hundreds of synthetic crystals. In addition, each design is sold in both 14K gold and white finishes. Those interested in purchasing these items might want to act fast, as the Energy Sword Necklace has already sold out.

Besides these stunning Halo designs, King Ice offers plenty of other jewelry based on gaming. Xbox fans can pick up a 14K gold plated ring that featuring the video game platform’s iconic logo, while jewelry designs based on console rival, PlayStation, are available on the site as well. Furthermore, the retailer sells necklaces designed around the Sonic the Hedgehog series.

With fans of Halo now able to purchase jewelry from the series, it seems like the potential for merchandising deals with the Halo franchise has no limits. And with the upcoming launch of Halo Infinite this December, it will be interesting to see what other unique and unusual Halo-themed products appear for sale next.