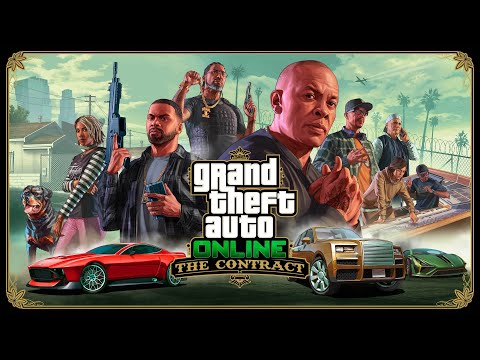 Rockstar Games has officially launched its next big update for GTA: Online, as The Contract is officially live. In this brand new DLC, players get to witness the return of Franklin Clinton and the debut of Dr. Dre, as well as the addition of plenty of new story missions and toys.

You can check out the official release trailer for GTA: Online The Contract below:

Thanks to an official Newswire press release from Rockstar, we’ve also got all the information you could ever need regarding what players can expect in this new DLC.

Join forces with one of Los Santos’ most famous hustlers and his friends in GTA Online: The Contract, an all-new adventure for solo players and groups, featuring the return of Grand Theft Auto V protagonist Franklin Clinton, manager of F. Clinton & Partner, a “celebrity solutions Agency” ready to fix the special kinds of problems plaguing the high rollers of Los Santos.

With your partnership in the Agency, you’ll work alongside new and familiar faces including Franklin’s longtime friend Lamar Davis, his loyal sidekick Chop, and the Agency’s elite in-house hacker Imani. And in the Agency’s first A-List client contract, you’ll help Dr. Dre resolve a high-stakes theft.

On the streets of Los Santos, Dr. Dre’s stolen phone is the talk of the town — ­ word is the device is loaded with never-before-heard music from Dr. Dre’s as-yet unreleased work, which you’ll need to track down before it leaks to the world. This could make or break your Agency, and you’ll be the one getting your hands dirty.

As you make headway with the investigation, you’ll discover new songs from the six-time Grammy Award-winning hip-hop legend, all premiering exclusively within this massive update to GTA Online.

You’ll also get a rare inside look at Dr. Dre working his magic at Record A Studios, a new music studio where you can hang with Dr. Dre and a special guest artist, kick back, and get a behind-the-scenes glimpse of the hit-making process.

As part of your partnership investment in F. Clinton & Partner, you’ll acquire a new multi-floor, state-of-the-art office space, fitting for a high-end private solutions Agency. The property includes office space for the team and a dedicated lower level for vehicle storage. You can add further modification with an Armory to service your arsenal and a Vehicle Workshop that opens a new range of modifications ideal for completing contracts for clients.

F. Clinton & Partner is new to the scene, and you’ll need to pick up Security Contracts for clients in need to gain experience and credibility. Recover valuables and vehicles, conduct daring rescue operations, defend high-value assets, and more.

After completing a few Security Contracts, Franklin will reveal the Agency’s dirtier work in Payphone Hits — off-the-books, street-level assassinations with bonuses paid out for following specific instructions. These assignments demand a low-profile — you’ll pick up the details by answering payphones around Los Santos.

In addition to a Concierge service at the Agency, you’ll be able to call Imani and Franklin from your iFruit in Freemode to make use of their unique services and abilities, as well as request Security Contracts and Payphone Hits from the road.

The Contract has three new weapons, each a valuable instrument Franklin has accrued over his career. The Heavy Rifle is available at Ammu-Nation or to purchase and modify from your Agency’s Armory at a discount. The Stun Gun and Compact EMP Launcher are tools of the trade that are exclusively available at the Agency’s Armory.

Look out for a fleet of seven new vehicles including the Pegassi Ignus supercar, Lampadati Cinquemila sedan, and Pfister Astron SUV, which are all available from Legendary Motorsport. The Dewbauchee Champion supercar, Bravado Buffalo STX muscle car, Enus Deity sedan, and Enus Jubilee SUV have new Imani Tech modifications available to them from the Agency’s Vehicle Workshop. Slick Mines, Armor, and Machine Guns are baseline essentials for Agency work. Meanwhile, a Missile Lock-On Jammer will keep you clean of homing missiles, and the Remote Control Unit will allow you to drive the vehicle remotely.

In addition to the premiere of The Contract, more updates are coming to GTA Online, including fewer phone calls, texts, and emails – with alerts moved directly to the in-game map in the Pause Menu. Also, daily fees for Properties and Businesses have been reduced, and much more:

GTA Online: The Contract is available now for PS4, Xbox Series X|S, Xbox 360, Xbox One, PS5, and PC. You can check out more screenshots from the game below.

The post GTA Online: The Contract Is Out Now With a New Trailer & Screenshots appeared first on Twinfinite.