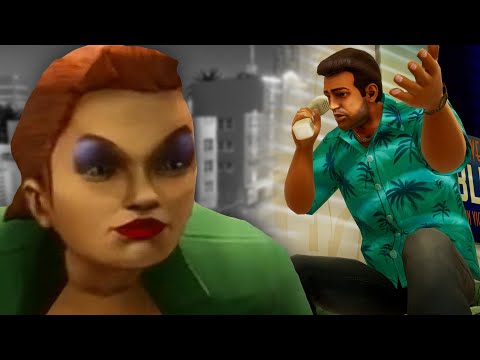 Another reader is unimpressed by the remasters of GTA: The Trilogy, especially given the lack of refunds and mod support.

There are some companies that you always expect the best of. It’s not like Nintendo, Naughty Dog, Platinum, and From haven’t made bad games, or at least disappointing ones, but I think most people would agree that anything they do is automatically of interest and even if it doesn’t turn out well you can guarantee that a lot of thought and effort has gone into it, with high production values and the minimum number of bugs and technical problems.

I would also add Rockstar to this list but GTA: The Trilogy – The Definitive Edition has really shattered my faith in them, and for more reasons than just the stupid, hard-to-remember name. As we now know, they didn’t send review copies out ahead of time, which is an instant red flag, and for anyone’s that played the games it’s now kind of obvious why. None of them are disasters (I’ve played San Andreas the most so far) but they are very buggy.

We’re not talking crash bugs here, or anything that completely ruins the game, but the whole thing just feels sloppy, rushed, and clearly unfinished. In short, it looks exactly like you’d expect a game to look if it was a few months behind (because of the pandemic or whatever) and then a publisher that didn’t care about quality – only profits – said to release it as it was; the release date, and making money at Christmas, being more important than its quality or their reputation.

That is not what I expect from Rockstar.

You can say that they’re all big games and it’s a lot of work to remaster them but that’s Rockstar’s problem and it’s not as if they didn’t know the difficulties before they started. GTA 3 is 20 years old, so it’s not like they haven’t had time to plan. There was also absolutely no need to release all three games at the same time. Who’s got time to play three massive, and very similar, games like this at once?

And surely, if you know you’re pushed for time and have to cut corners to make a deadline, delaying the other two games until later is the most obvious thing in the world to do? Nobody would’ve been that upset about it. Considering most fans will skip straight to San Andreas, or at least leave GTA 3 till last, it makes complete sense to release that one first and the others later.

They’ve done what they’ve done for greed, but I don’t even understand that as it’s not like anyone wasn’t going to buy the other ones as well. But now you’ve got a game that looks cheap and shoddy and… considerably worse than any modder would create.

That’s what gets me the most. Modders have been doing a much better job of the games than this for years and not only is the paid-for version worse than their efforts, but Rockstar has been issuing takedowns on all their work in the last few months. They’ve taken a scorched earth policy where you also can’t buy the original games on older formats now, which must be great for PC owners that can’t now play any version of the games.

I’ve seen people comparing the situation to Cyberpunk 2077 and while I don’t think it’s that bad on a technical level it is actually worse in one sense: there’s no refunds. No way for PC owners or anyone else to get their money back, as Rockstar take their money and run – just like some no good GTA NPC.

Rather than being the definitive editions of these games these are now objectively the worse. If you want a better modern version pick up the PS Vita edition if you can or get the PC original and mod it, although you’ll find that Rockstar has made that as difficult to do as they possibly can. The game’s a disaster, not just in terms of its quality but what it means for Rockstar’s reputation. It’s the worst move they’ve made in a very long time and I bet they’re already regretting it.

MORE : GTA: Vice City is not a good game and I wish I didn’t think that – Reader’s Feature

MORE : GTA could last as long as James Bond (aka 60 years) says Take-Two