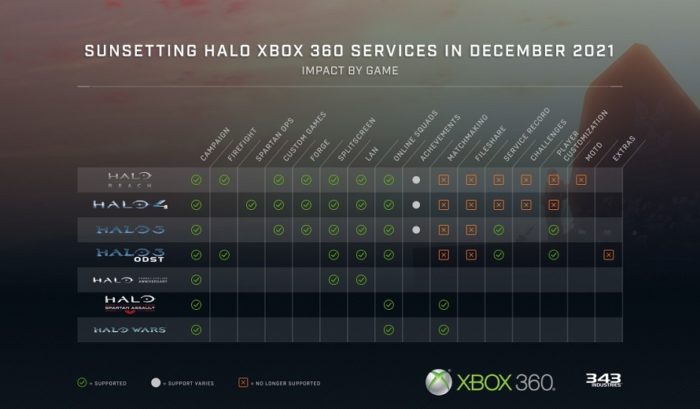 The Halo series may have debuted in 2001 with the original Xbox, but most of its games first launched on Xbox 360, where so many of its fans first fell in love with the franchise. There are a lot of fond memories of firing up one of those games with sound of the 360 and even though they are all now available on Xbox One and the Series X|S, there is a closing coming to those native 360 games.

343 Industries announced that most of the online services will be shutting down for the Halo games on Xbox 360 and that had been their intention since physical and digital sales of the games had been on the decline since 2018. The shutdown date for these services was set for December 2021, but has been revised for January 13th, 2022.

The online services that will be affected include matchmaking, file share, challenges, MOTD, and extras. Service record and player customization will persist for Halo 3 and Halo 3: ODST, but will go offline for Halo Reach and Halo 4.

Matchmaking will be remain online for Halo Wars and Halo: Spartan Assault. Halo: CE Anniversary will be unaffected with the exception of the Halo Reach Firefight crossover content.

With all of the above games available on Xbox One and Xbox Series X|S, there are probably very few players that still play them on Xbox 360. That being said, Halo: Master Chief Collection and the native Xbox One versions will still have all their online services active. However, the 360 titles played through backwards compatibility will be affected.

As much as we loved playing Halo 3 on Xbox 360 back in 2007, all good things must come to an end. Plus, we have Halo Infinite to look forward to in a couple of months, so get with the times, grandpa!

When was the last time you played Halo on Xbox 360? Let us know in the comments below.