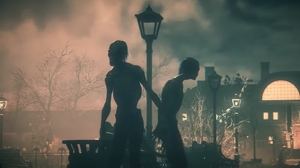 Cast your mind back to 2019 and you might recall the news that a number of House of the Dead remakes were on the way. Now, publisher Forever Entertainment and developer MegaPixel Studio have shared first footage of their zombie shooter spruce-up running on Switch.

Forever Entertainment – which published MegaPixel Studio's uneven but enjoyable Panzer Dragoon remake last year – previously confirmed House of the Dead 1 and 2 would both be getting the remake treatment, but today's reveal focusses solely on the first game.

Sega originally released House of the Dead 1 into arcades in 1996, sending players – as either Agent Thomas Rogan or his partner G – on a first-person, on-rails rampage through a spooky old mansion, using their light gun to obliterate the undead creations of the evil Dr. Curien.