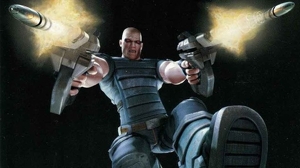 Last week, we heard there was a secret unlock code to make the full TimeSplitters 2 campaign playable in Homefront: The Revolution, opening up the game's well-known Easter egg which was previously thought to feature just a couple of classic TimeSplitters 2 levels.

Days later, that secret unlock code was then rediscovered after the matter hit the headlines – and there were actually multiple codes, it was revealed, with some still having unknown functions.

Eurogamer video producer Ian Higton played through Homefront: The Revolution to test one of these codes out – you can see him entering the code in the footage below, and trying out numerous TimeSplitters 2 story levels.