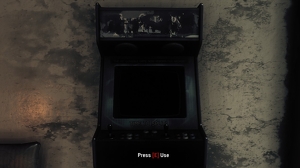 Earlier this week, the internet was abuzz after a developer revealed a fully playable version of TimeSplitters 2 had been squirrelled away in Homefront: The Revolution. The only snag was the code required to unlock the easter egg had been lost to time – or so it was thought, until now.

Word of the substantial easter egg first surfaced over the weekend, when former Homefront: The Revolution developer Matt Phillips revealed the TimeSplitters 2 cameo seen in Homefront's retail version – two story levels playable on an in-game arcade cabinet – was originally intended to be "fully playable" via an unlock code that was never publicly released.

Unfortunately, "the unlock code has been lost to time," Phillips tweeted, explaining he no longer had the notebook with it in any more. The developer did, however, reveal the code had been shared with a friend to leak in a Discord channel prior to its disappearance ("They called him a liar and banned his account", Phillips noted), and it's this very same friend – Xbox principal software engineer Spencer Perreault – who's re-emerged to save the day.