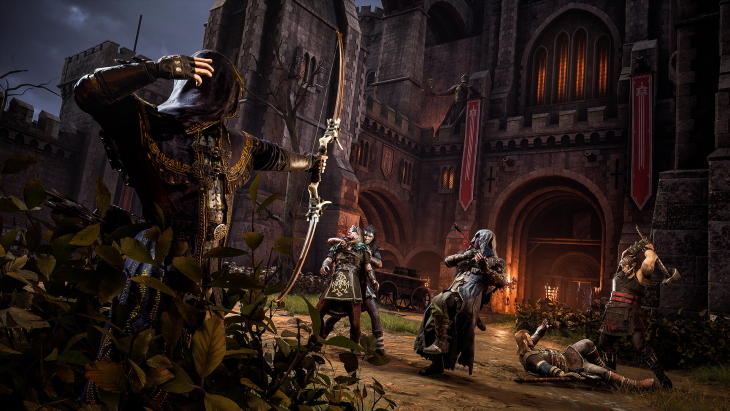 As previously reported, the game is set in a dark fantasy medieval world that has become corrupt and cruel. Thieves and rogues have come to claim riches, and win favor among the people.

Two teams must attempt to outwit AI guards, and each other. Each character has their own skills and abilities, letting them sneak unseen, or fight it out in combat; some through magic.

Race against your rivals to sneak past guards, take out key targets, and escape with the loot. Between heists, players will have a chance to upgrade their characters with new abilities and gear.

You can find the gameplay overview trailer below.

We are all Outlaws… but some of us will become Legends.

Faced with a merciless, unchecked state, rebels and rogues battle to claim their place among legends. To win influence with an oppressed people, rival gangs compete in daring heists to hit the wealthy where it hurts. Folk hero or gold-hungry outlaw, only the best will escape with hard-earned riches.

Two teams of 4 players compete to execute the perfect heist, in medieval environments patrolled by deadly AI guards. With the unique skills and mystical abilities of each character, moving in stealth to steal treasures unseen or dominating through loud and brutal combat.

Blood will be spilled. Riches will be stolen. Legends will be reborn.

Hood: Outlaw & Legends releases May 10th for Windows PC (via Steam), PlayStation 4, PlayStation 5, Xbox One, and Xbox Series X. Pre-orders grant access to the game on May 7th.