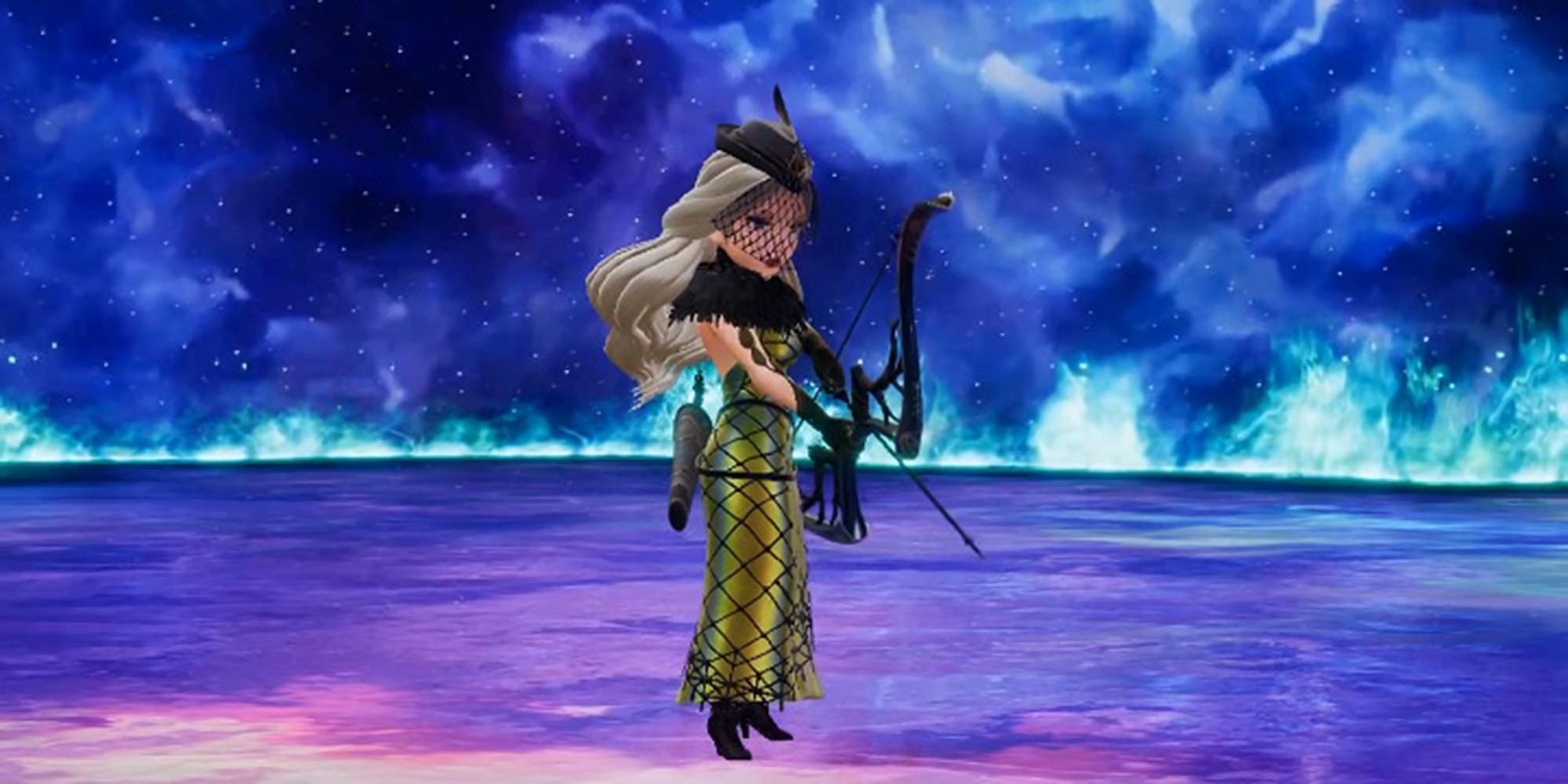 As you arrive in Wiswald in Bravely Default 2, you will come to learn of the mysteries happening around the village. Elvis’ old friends Roddy and Lily are acting strangely, and it’s up to you to figure out what’s going on.

The first boss you face in Chapter Two will be either Roddy or Lily. Lily holds the Ranger Asterisk, allowing her to deal massive damage with rapid arrow shots. Let’s go over Lily’s attacks and weaknesses, and one strategy for how you can beat her.

Lily’s stats, weaknesses, and attacks are listed below. Similar to Roddy’s boss fight, Lily will have a Picto-Amrita join her in battle, whose stats and weaknesses are also listed below.

Your strategy for this fight will be to quickly knock out each boss one at a time. To do this, you will want to have a party setup like the one below.

This party will allow you to use versatile single-target physical attacks, while supporting those characters with White Mage, Bard, and Beastmaster abilities. If you haven’t fought Roddy yet, you won’t have access to the Red Mage Job. In that case, use a Bard instead for additional access to their powerful buffs.

For your Vanguard/Berserker, you also have the option of making the Berserker your main Job. Doing so will increase that character’s strength at the cost of lowering their overall defenses. If you are confident they can survive Lily’s onslaught of attacks, using a Berserker/Vanguard will have you dealing much more damage to the boss.

Rather than using two physical damage dealers for this fight, you can opt to change one of them to a Black Mage. Doing so will allow you to strike Lily’s weakness to Lightning attacks at the cost of losing the damage bonuses from your Beastmaster. As we will look at in the next section, having a Beastmaster Sub-Job will allow you to use the Orc Leader’s skill Encourage, which increases physical attack.

Using a magic-based attacker will bring down the overall cohesion of your team. However, using Black Magic will let you consistently deal damage without having to worry if your buffs are lined up properly.

After you’ve situated your party’s Jobs, you will need to equip them with some specific gear. Lily will utilize the paralysis status ailment during this fight, and you will want to avoid this at all costs. To do so, equip your party with an Earthing Rod. This accessory can be purchased or found in Wiswald.

Alternatively, for characters that have Berserker Job at level 9, you can equip them with the Support Ability Unshakeable Will. This ability will prevent all status ailments that prevent the character from acting, including paralysis. This ability is incredibly useful for this fight, as it affords you more flexibility with your accessories, letting you focus on more defensive or offensive options.

If you faced Roddy before heading to Lily, he will join you for this fight. Roddy makes himself quite useful with his Heal ability that will restore a flat 1000 HP. However, if you are facing Lily before Roddy, you won’t have any other characters join your party.

The strategy for this fight is similar to the one used during Roddy’s boss fight. If you haven’t fought him yet, let’s go over the general strategy once again.

Lily is joined by Picto-Amrita for this fight. Both enemies are weak to Light damage, but this element is scarce at this part of the game, and can’t be used consistently to deal with this boss. Instead, you will want to focus on each enemy separately, bursting them down one at a time with physical attacks.

We recommend targeting Lily first, as her high damage attacks can blow through your party’s defenses. The Picto-Amrita, on the other hand, is rather weak. Instead, this enemy has high HP and a wide array of elemental immunities. This is why you’ll want to use mainly physical attacks for this boss fight.

Your main damage dealers will be a Monk/Beastmaster and Vanguard/Berserker. Because Monks don’t use weapons, this Job can be used to deal with both enemies. Similarly, Lily and Picto-Amrita do not resist Axe attacks, making your Vanguard just as capable of downing them.

As the fight begins, have each of your party members Default to build BP. Continue doing this until each of your party members has three BP. Then, have your Bard use Hurts So Bad four times to raise physical attack. Do the same with your Beastmaster, using Orc Leader’s Encourage to additionally raise physical attack. Now that your party’s physical attack is incredibly high, use your strongest powered attacks to quickly kill Lily. For Monks, use a combination of Focal Blast and Flying Heel Drop. For Vanguards, use Neo Cross Slash.

Before going all-in with your attacks, make sure the enemy you are targeting isn’t Defaulting. If they aren’t, then your combined attacks should be enough to at least kill Lily, and most likely damage Picto-Amrita. This enemy isn’t nearly as dangerous as Lily, so rather than repeating this whole process, instead, use your turns as they come. Buff, attack, and heal to bring down Picto Amrita and secure the Ranger Asterisk.

Next: How Long Does It Take To Beat Bravely Default 2?